Our Ocean Defender flagship the LegaSEA headed out on September 30th from Cabrillo Way Marina through Angel’s gate under overcast skies and excellent ocean conditions.

You might like to start by watching this dramatic underwater video shot by Alice Duong and edited by Mike Wynd.

On board was one of the biggest groups we’ve had in a long time with fourteen people!

Topside crew was Captain Dave Merrill, Jeff Connor, Lisa Davis, Karla Reinhardt, and Mitch Pingrey.  Mitch was originally planning on diving, but forgot a critical piece of his dive gear: his hood.  This is critical because the majority of the body’s heat is lost through the head, and in cold water diving, a diver can quickly become chilled without a hood.  This would have limited Mitch’s ability to stay in the water very long, so he opted to help out on deck instead. 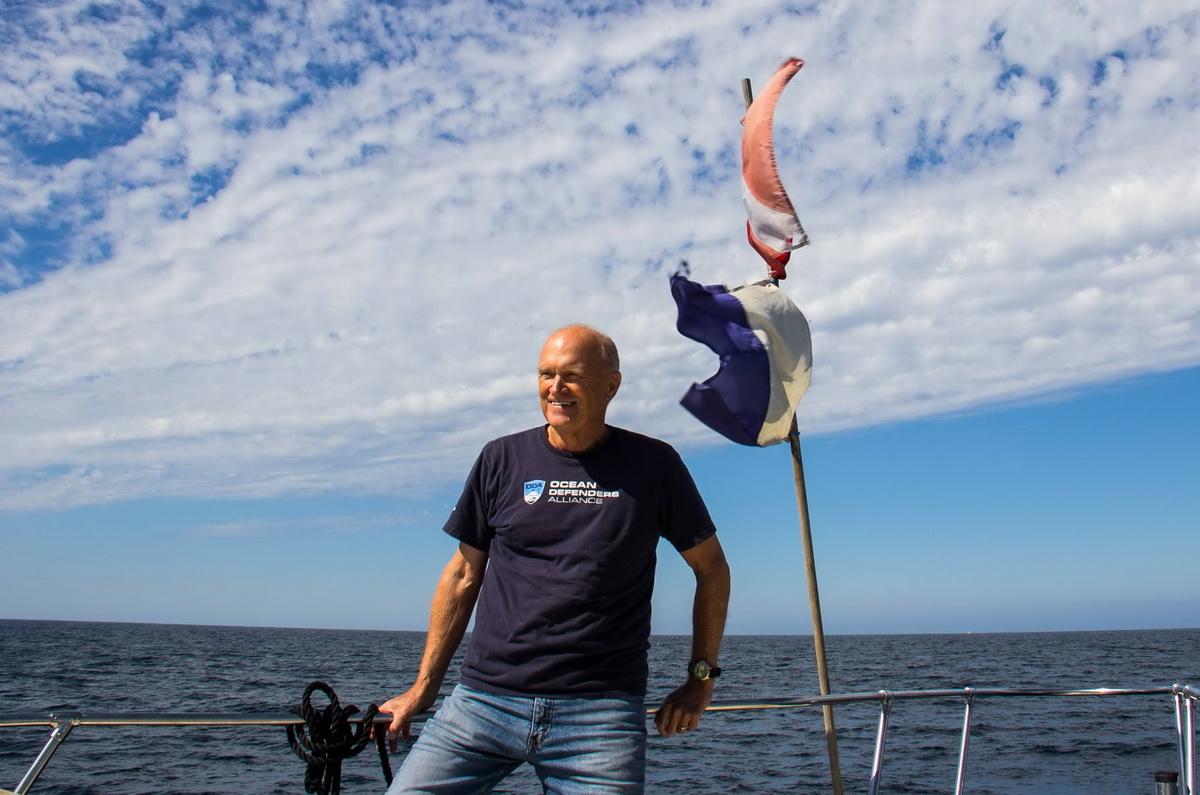 Captain Merrill taking a break while the ship was at anchor.Additionally, on board were some special guests: Maria Garcia and her classmate Dan who are film students at Cal State University, Northridge.  Their project to do a documentary on ODA was one of two chosen out of over twenty submissions.  We also had a young environmentalist, 15-year-old Victoria Gonzales and her mom, Rosemary Gonzales.

The target site for the day was a site known as the Radio Tower.  It is just that, an abandoned radio tower that lies on its side at a depth of 100-110 feet.  It is literally covered in nets as its structure acts as a snag for any derelict fishing gear that is pushed toward it by the currents.

We arrived at the site within about 20 minutes.  Conditions were very good, with minimal swell and no current to speak of.  Jeff and Lisa deployed the anchor but quickly realized they had to pull it back in due to one of the links in the anchor chain threatening to come un-done.

After a quick field repair to the anchor chain, Captain Dave repositioned the vessel over the site and the anchor was re-deployed.  The boat’s imaging instruments showed that we were right over the site.  Success!!

The plan was for the team of rebreather divers to jump in first.  They would be Team 1.   A rebreather is a type of diving equipment that removes CO2 from the diver’s exhalation gas and injects oxygen back in.  This allows the diver to recycle or “rebreathe” their air and stay underwater for longer periods of time.  This team consisted of Mike and Amanda.  Their planned dive time was approximately two hours.  In addition, the plan was for Alice to join them after about 45 minutes.  She was in charge of the very important task of capturing video. 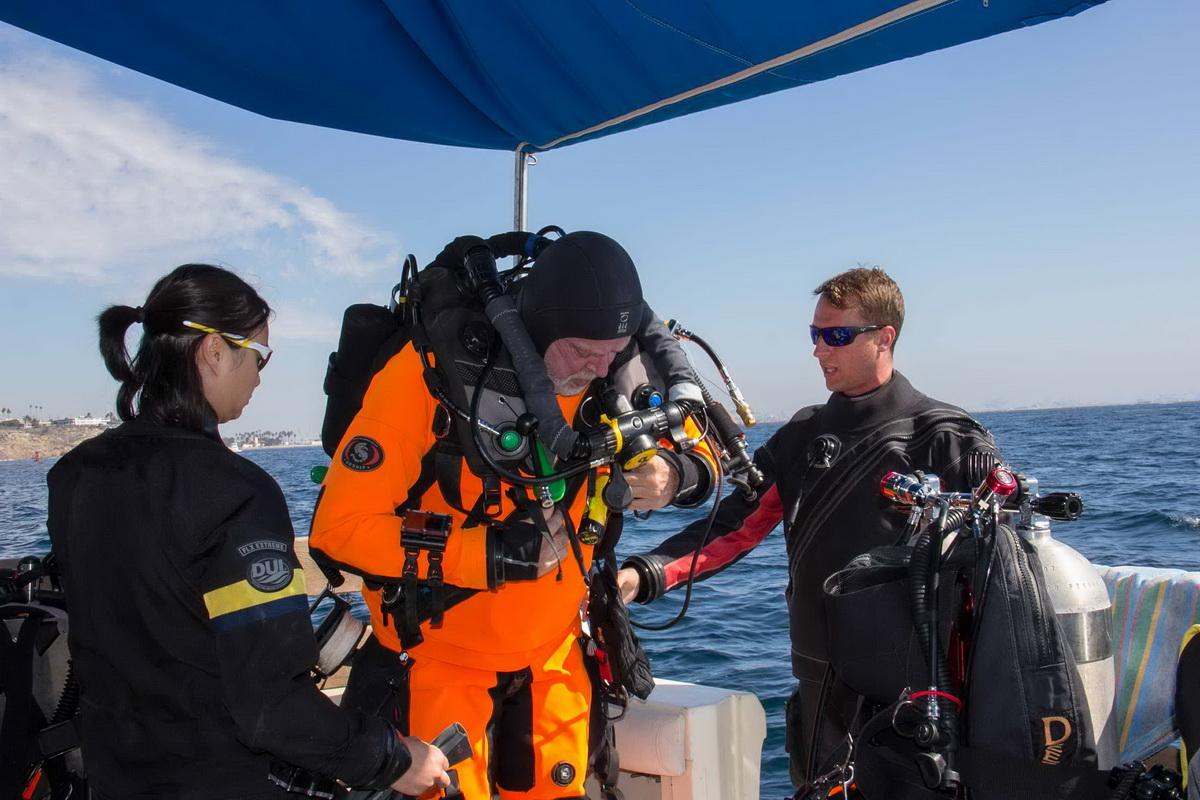 About 30 minutes after the first team jumped in, Team 2, consisting of me and Geoff, hit the water.  We were diving a configuration that is called “open circuit” which is the traditional type of SCUBA set up where you breathe the gas you carry in your tank and do not recycle it.

The two dive teams each located areas in which to work and began the laborious process of cutting net away from the structure.  Once a large piece of net is cut free, a lift bag is attached to the net and filled with air.  This “balloon” floats the net to the surface where it can then be retrieved.

Help from the Team Above

Since Mitch had opted out of the dives, he served as a surface swimmer.  When the lift bags popped to the surface, Mitch swam out to them and towed them on the surface back to the boat.  The crew was then able to pull the nets onboard and into the awaiting 55-gallon trash bin. 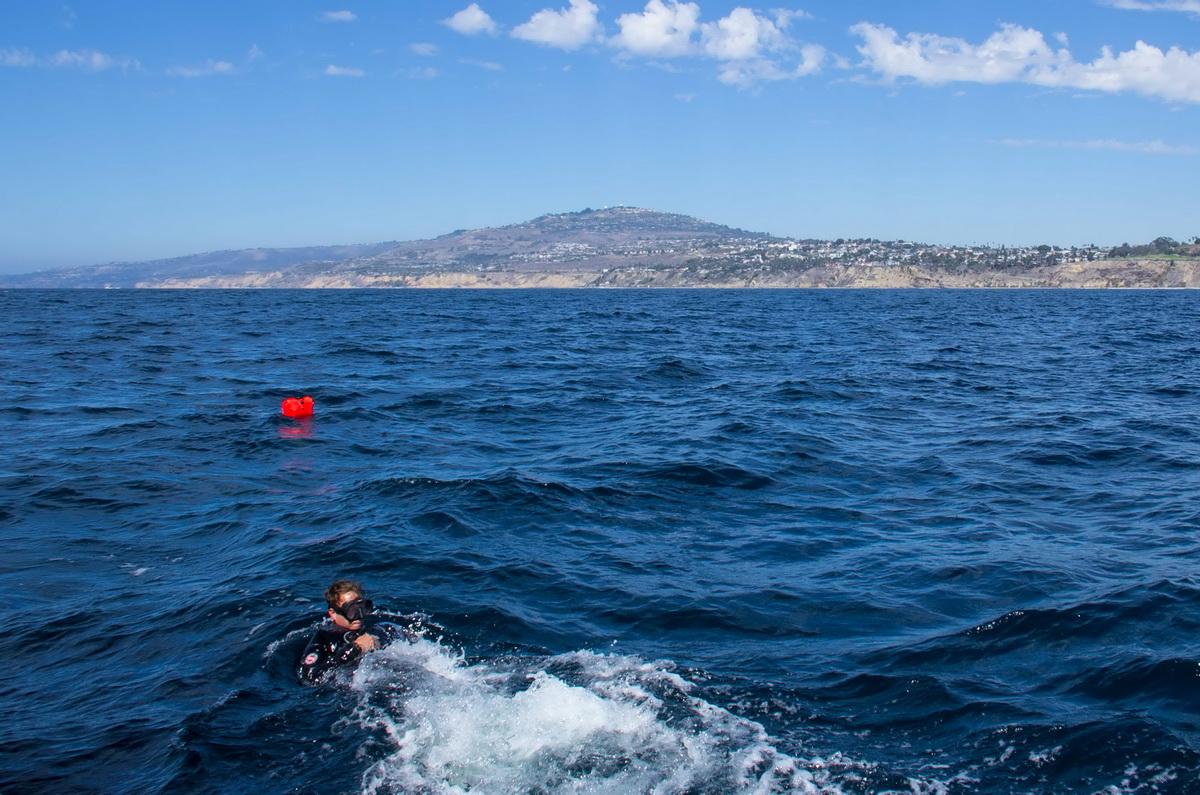 After the first dive was complete, the divers rehydrated, had some snacks, and completed their surface interval (which is a break from diving).

As we reeled in the net, we took a minute to extract this baby octopus and put him back in the ocean. 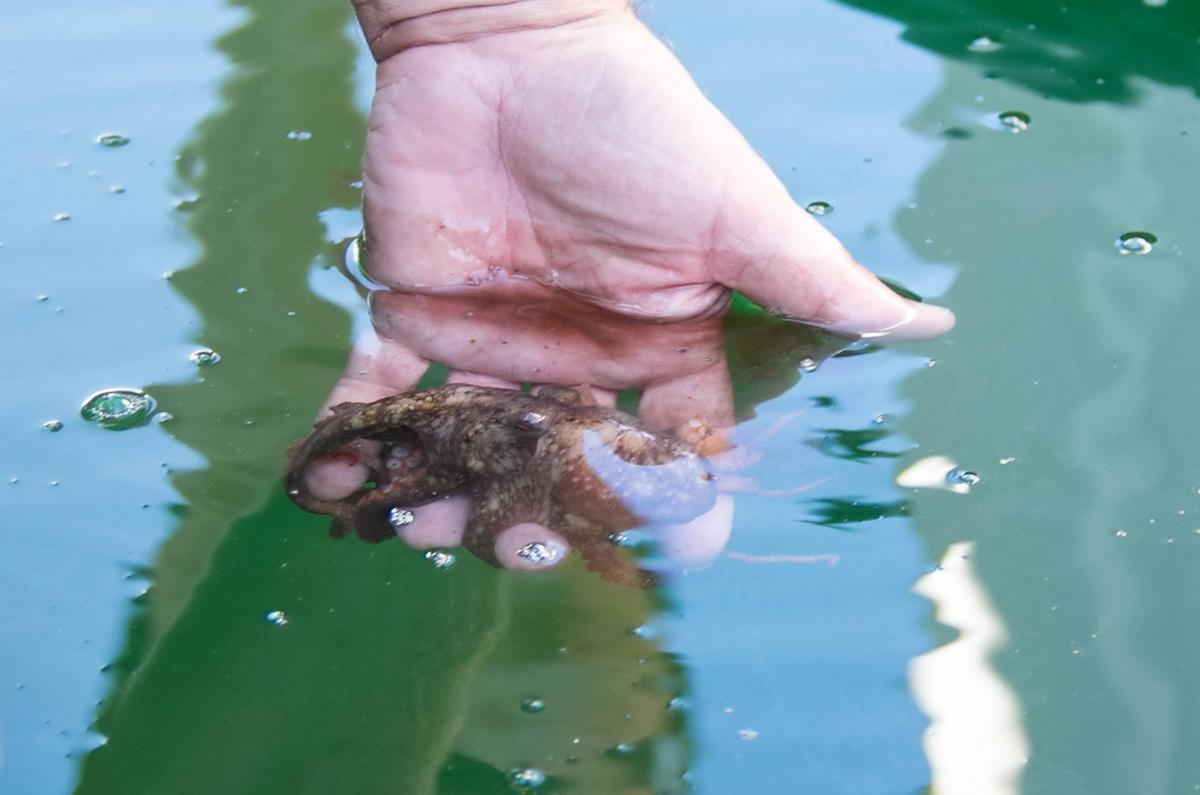 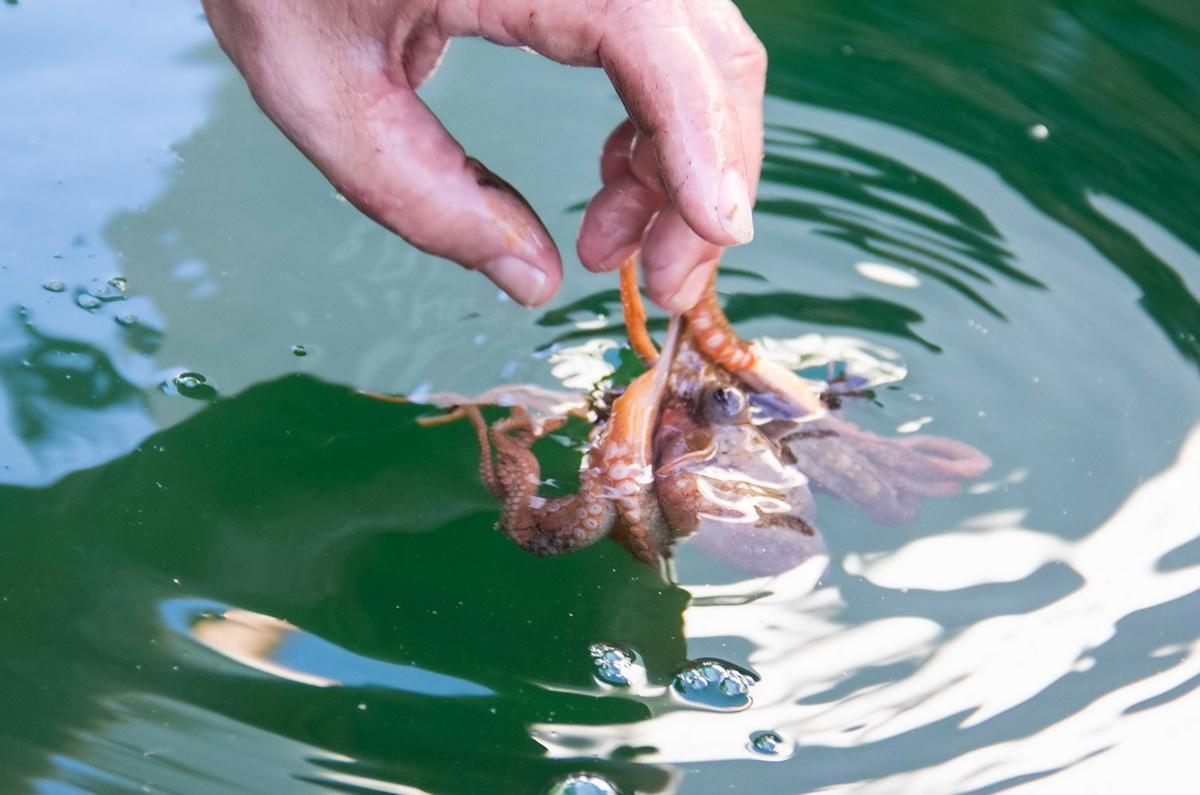 Meanwhile, Captain Dave was keeping an eye out on the conditions.  The South swell was beginning to pick up.  There was a tropical storm in the South Pacific the week before and it was forecasted that California coasts would feel some residual effects in terms of large swells that afternoon.

After 90 minutes of surface interval, Captain Dave advised that if the divers were going to do an additional dive, they should do it soon, as conditions were likely to worsen as the day wore on.  It can be extremely hazardous to put divers in the water with large swells.

Final Effort Snags Last Bit of Net for the Day

So, Team 2 was ready to go back in for Dive 2.  Since the rebreathers had done such a long dive, they were not doing a second one.  Kim and Geoff jumped in and descended to the site.  There were still two  lift bags attached to net from the first dive.  What Jeff and I needed to do was cut the net that remained attached to the structure and add a bit more air to the lift bags to float them to the surface.  This would bring up two very large pieces.

One of the lift bags was attached to a squid net and the other to a very large piece of gill net that had all kinds of shells, rocks and metal debris trapped in it.  We completed their task and also managed to stuff about 20 pounds of squid net into a mesh bag that they carried up with them to the surface.

While the divers were in the water, film students Maria and Dan performed test photography shots and deployed their drone for some distance footage of the boat and the site.  We can’t wait to see their finished product!

Mitch again towed in the lift bags and nets from the second dive and the Deck Crew hauled in the nets. 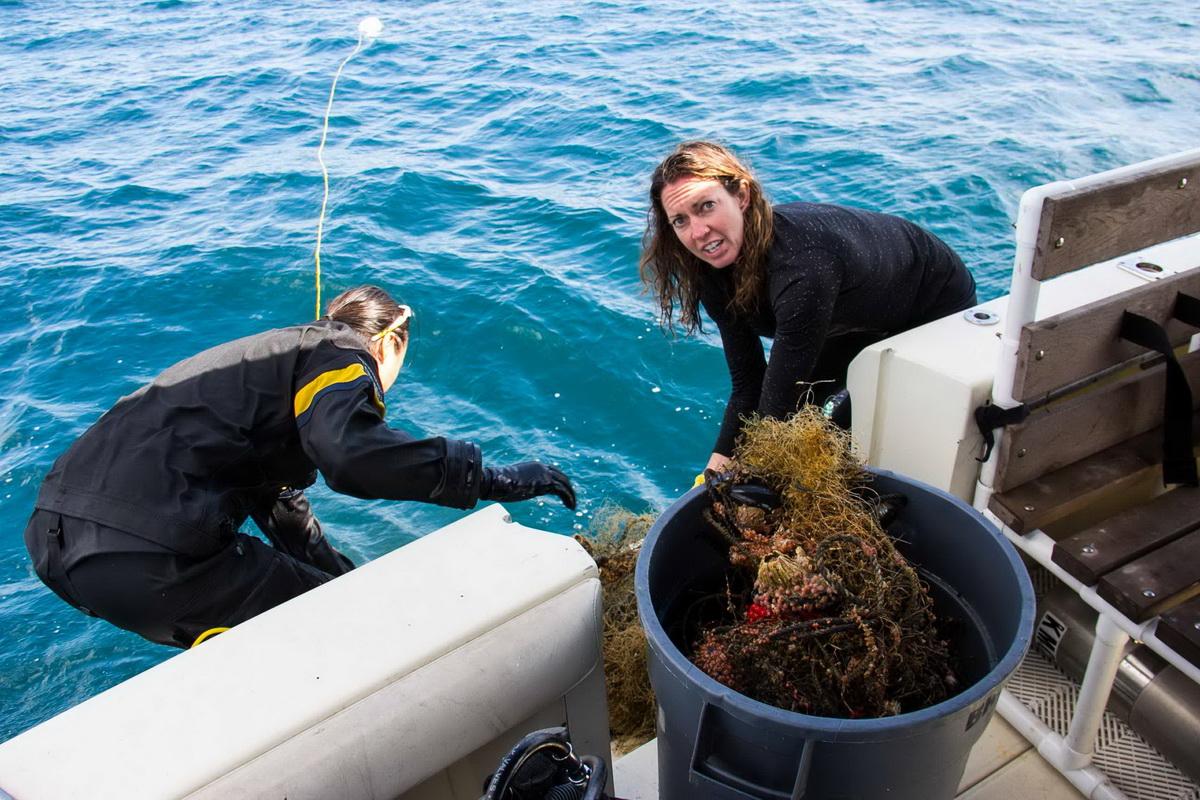 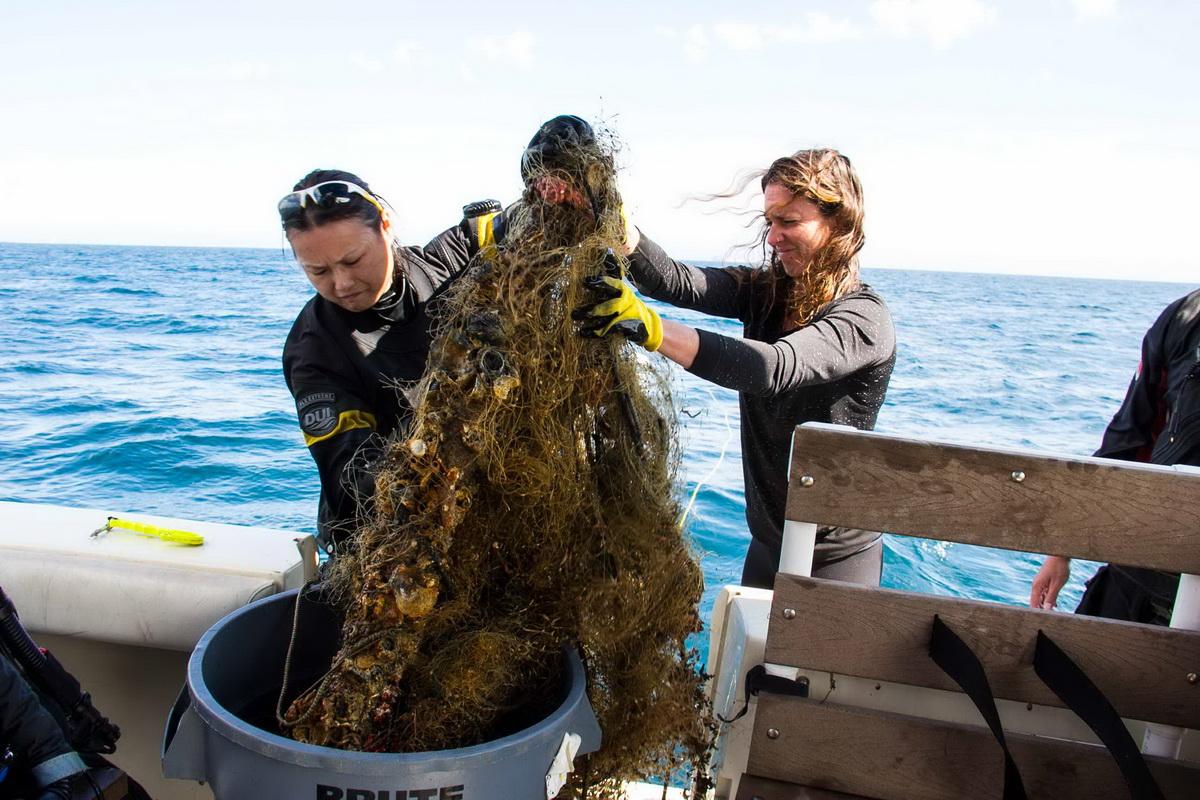 When all of the net was handed up, the divers got back on board the boat.  It was time to pull anchor and head home.  It was just in time as we could see the storm clouds off in the distance and the swell was picking up.

Taking Inventory and Giving Thanks

Back at the dock, we estimated the haul for the day to be 250-300 pounds of net.  The majority of it was gill net with the remaining being squid net.  This definitely makes a dent in the potential entanglement hazard caused by this site! 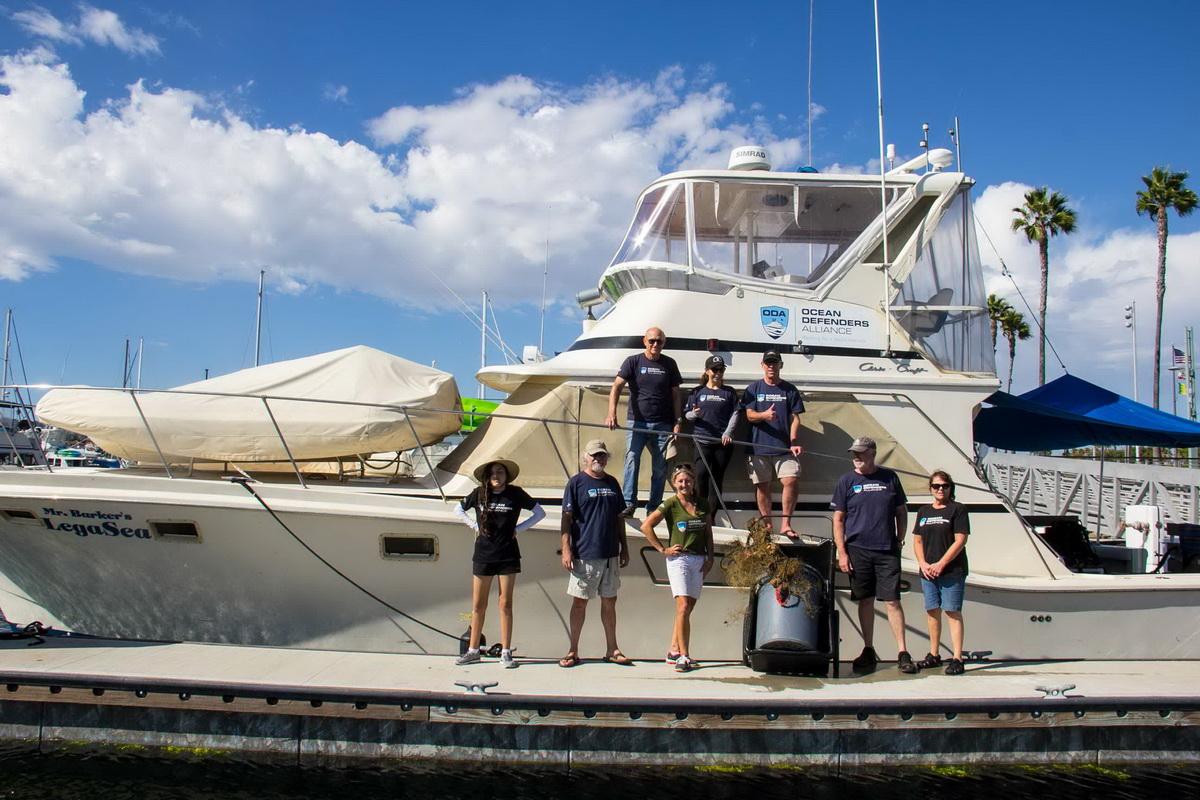 Everyone put in a great effort and the day’s mission was a resounding success.  Many thanks and appreciation to the divers and crew for making it happen! As we've been reporting, this site has a large amount of debris on it, so we'll need to come back. Please be part of the crew by chipping in for fuel and supplies to enable our boat to return to this site! Boatloads of thanks in advance!