So Much Ocean Defending Work to Do

The lobster fishing season ended a few weeks ago, and we were set to go looking for abandoned traps this weekend but canceled due to the virus.

Even though we have a fairly small crew, we’re in very close quarters (almost always less than 6 feet distance) as we work as a tight-knit team to safely navigate the rocking boat and haul in debris.

Going forward we’ll be doing something we’ve never done before: Diving the entire length of the Los Angeles Harbor and Long Beach Harbor breakwall, which is roughly seven miles long!

By law, the lobster fishermen have to set their traps 100 yards away from the breakwall.  As anyone can attest who has gone out while the traps are in the water, there is a mass of traps set exactly at that distance. 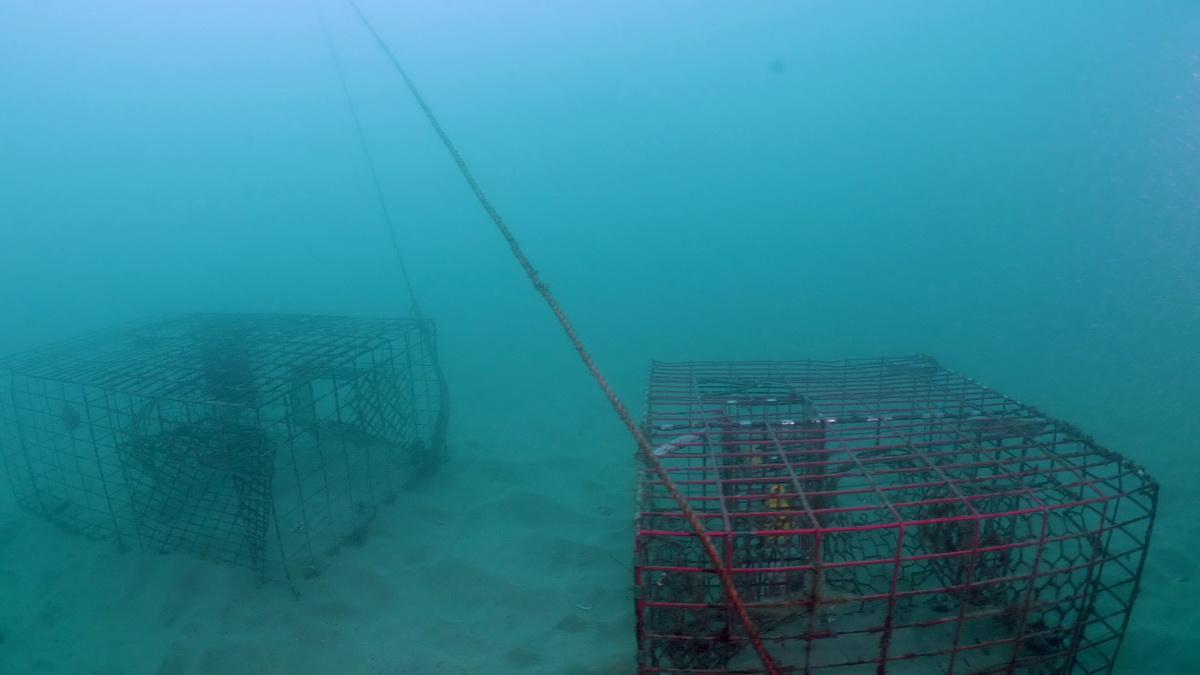 I would estimate over 1,000 traps in that stretch.  The California Department of Fish and Wildlife (DF&W) says between 10-15% of the traps are lost every year.  That means there are potentially 100 to 150 traps still out there still killing marine wildlife.

We have the team to do this and the equipment.  We hope to line-up funds for the expeditions as there will be many. All told, this will probably take 3 to 4 months to complete…and we’re raring to go!

We were scheduled to do a beach cleanup at the Bolsa Chica State Beach on April 1st.  We applied for the permit and got it, but then the Park Service let me know that we would have to cancel it until at least April 15 and maybe longer depending on the spread of the virus. 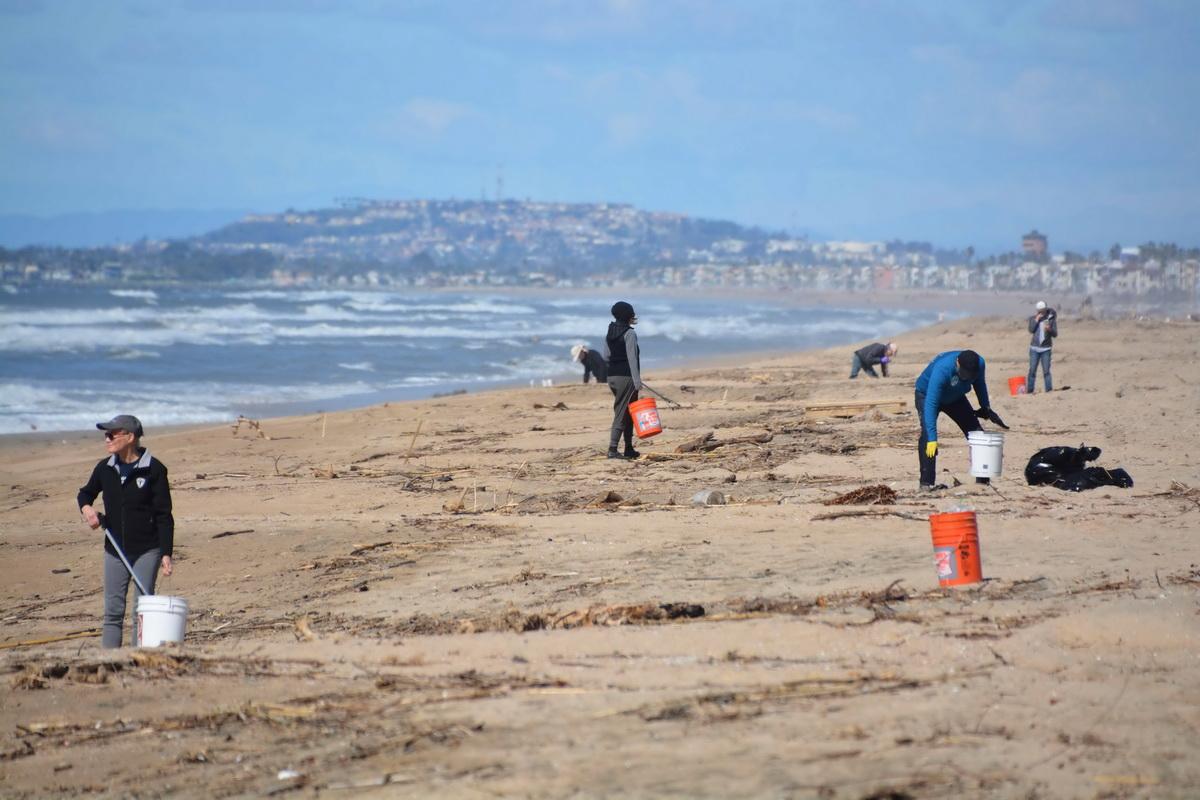 The photo is the ODA crew at Bolsa last year.

This event will be open to the public.  So, please keep your eye on our calendar if you want to participate.

ODA is partnering with Plastic Ocean Project (POP) to do a harbor cleanup in Wilmington, North Carolina.  Bonnie Monteleone runs POP, and she’s also on ODA’s Board of Directors.  Her organization focuses on studying the effects that plastics have on the marine environment.  They have also removed thousands of pounds of plastic from the Atlantic Ocean.

Here’s a photo of Bonnie and me that I really like. We’re fortunate to have her on our team! 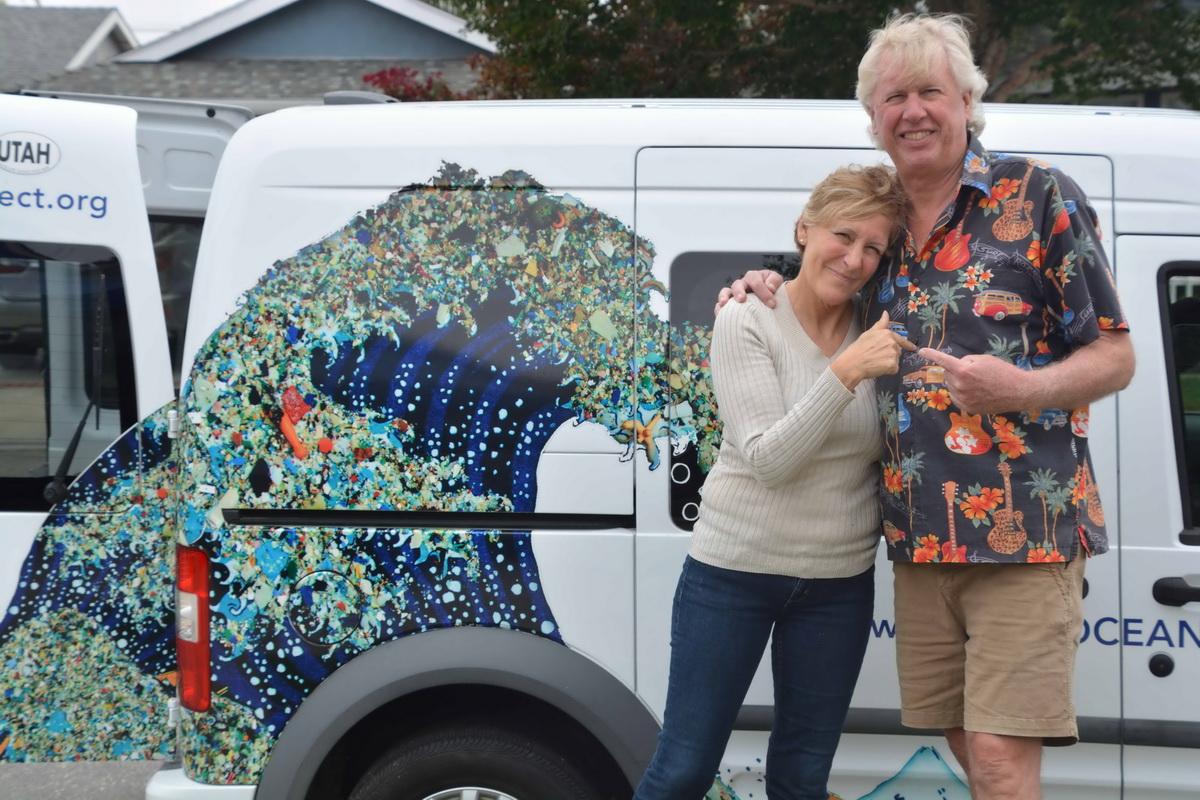 Both Bonnie and I thought it would be great to get divers in the water in one of their local harbors and start removing all the debris that rests on the bottom.  We are scheduled to do the dive on May 2 or 3.

Two weeks after that we will be doing another Honokohau Harbor cleanup on the Big Island of Hawai’i.  All you Hawaiian divers set your calendars for May 16, a Saturday. 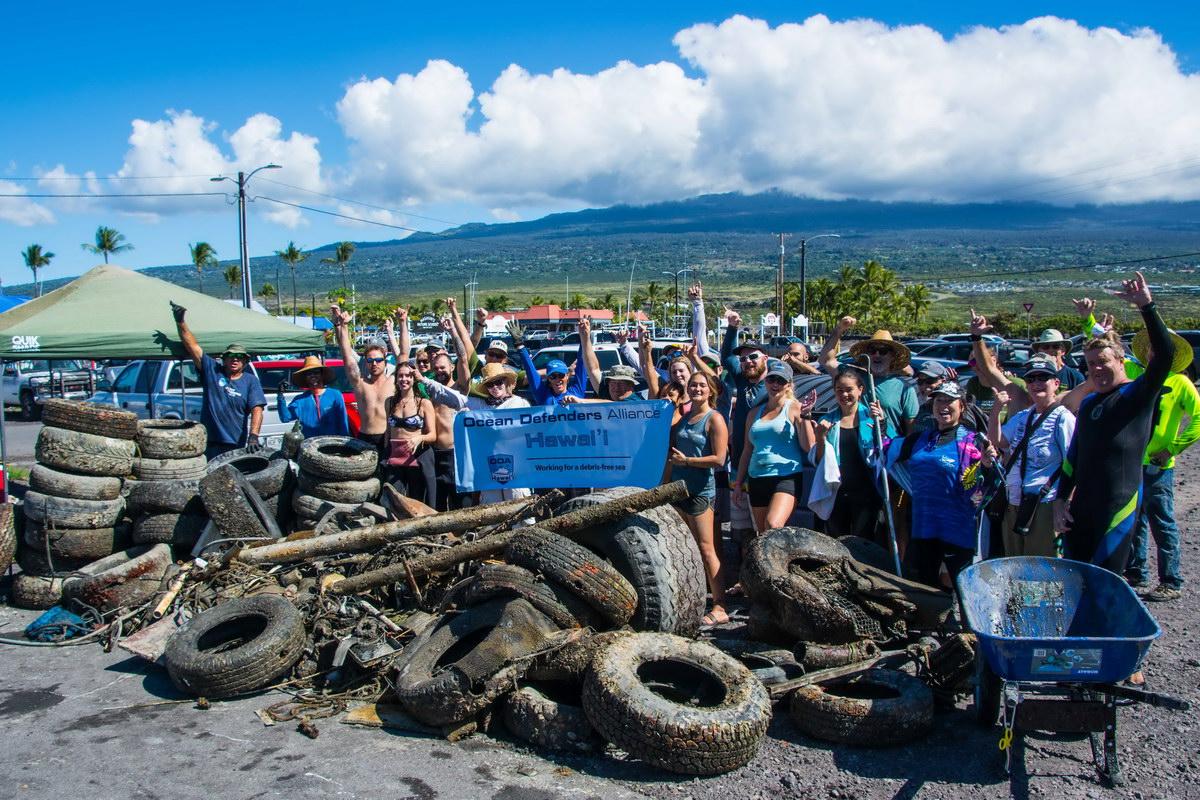 And of course, we have our ongoing underwater cleanups going with our partners at Island Divers Hawai’i, which happen once a month all year round. 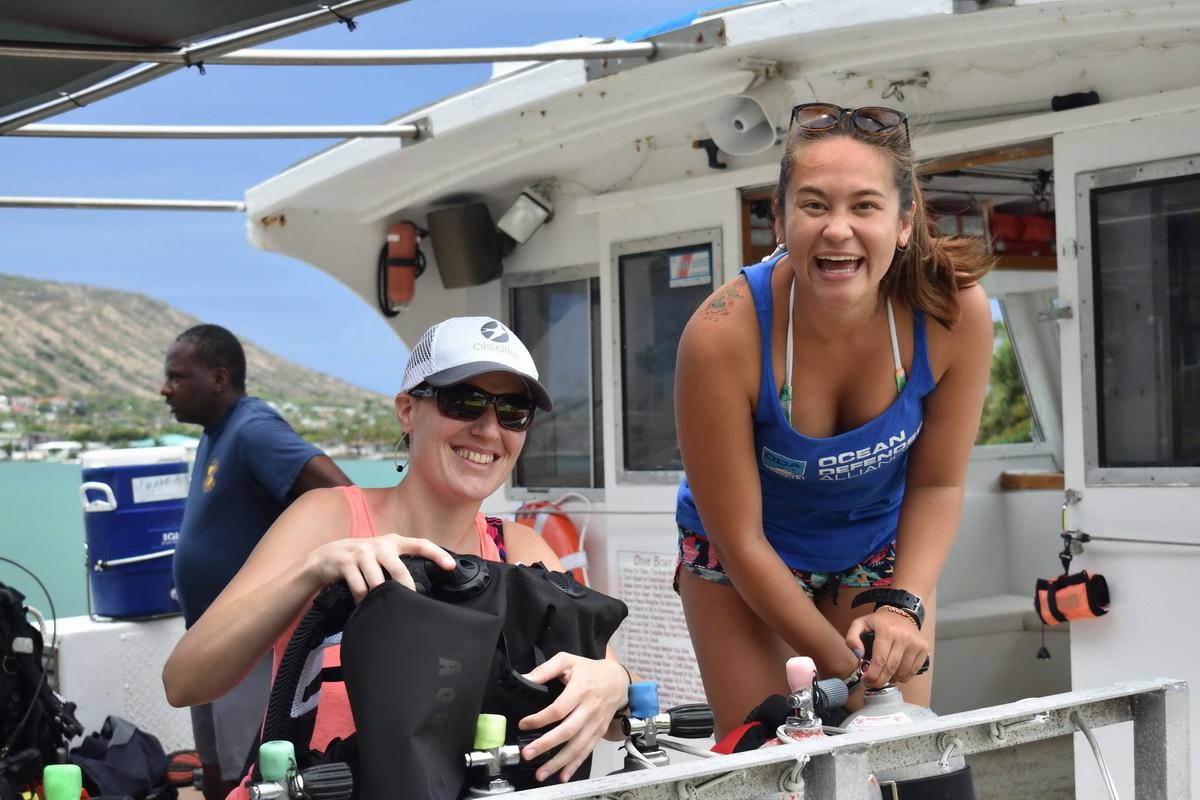 You can signup on their ODA page and join the Oahu crew. You can see they have a lot of fun doing good work, cleaning our precious coastal waters!

Working with our youth

We’ve been working with the students of Clark Magnet School for six years now.  They have a fantastic teacher in Dominique Evans. In photo below, Dominique is in the lower left corner. 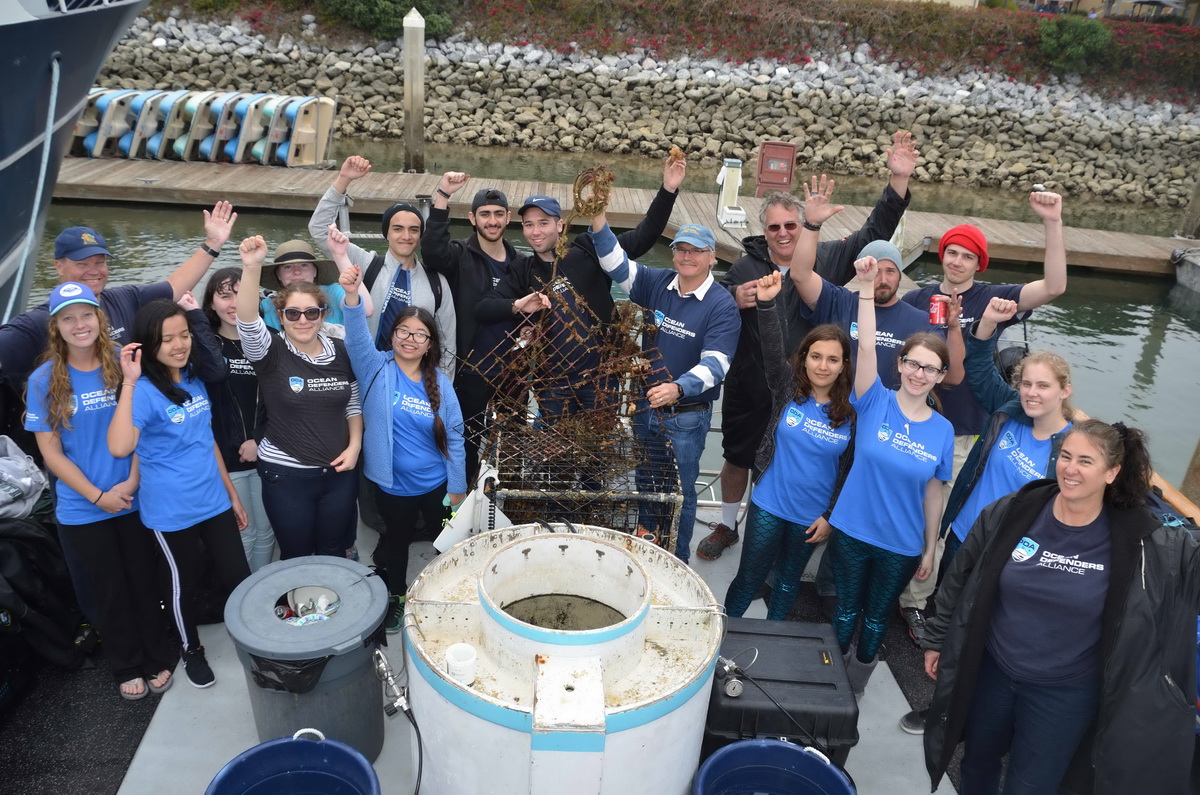 As you can see, we’ve had them out on our boat (several times, in fact) and they have successfully removed debris! Here they proudly display the trap and remnants they recovered.

Dominique teaches marine biology and is showing the students how to utilize an underwater ROV to locate, document, and if possible, remove marine debris.  It’s fantastic that they’ve actually been able to experience the joy of removing ghost gear! 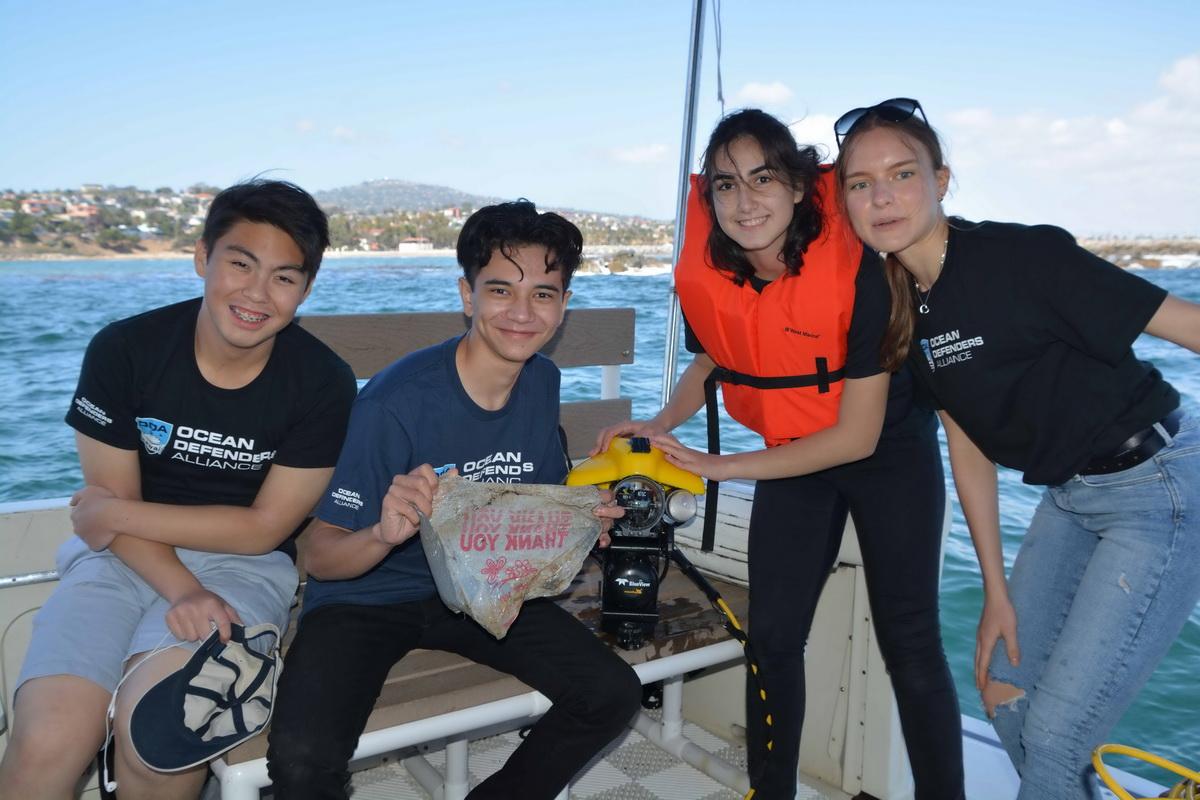 I love how engaged they are – you can see it in their faces.

We were scheduled to take the students out on the LegaSea on March 26th, but that came to a screeching halt as well.  We’re going to reschedule that for some time in May.

On April 15th, ODA diver and Advisory Board Member Kim Cardenas and I are scheduled to give a presentation to the Channel Islands Dive Club (CIDC).  You’ve seen Kim in MANY of our “Crew with Catch of the Day” photos as she’s one of our hardest working debris removers. 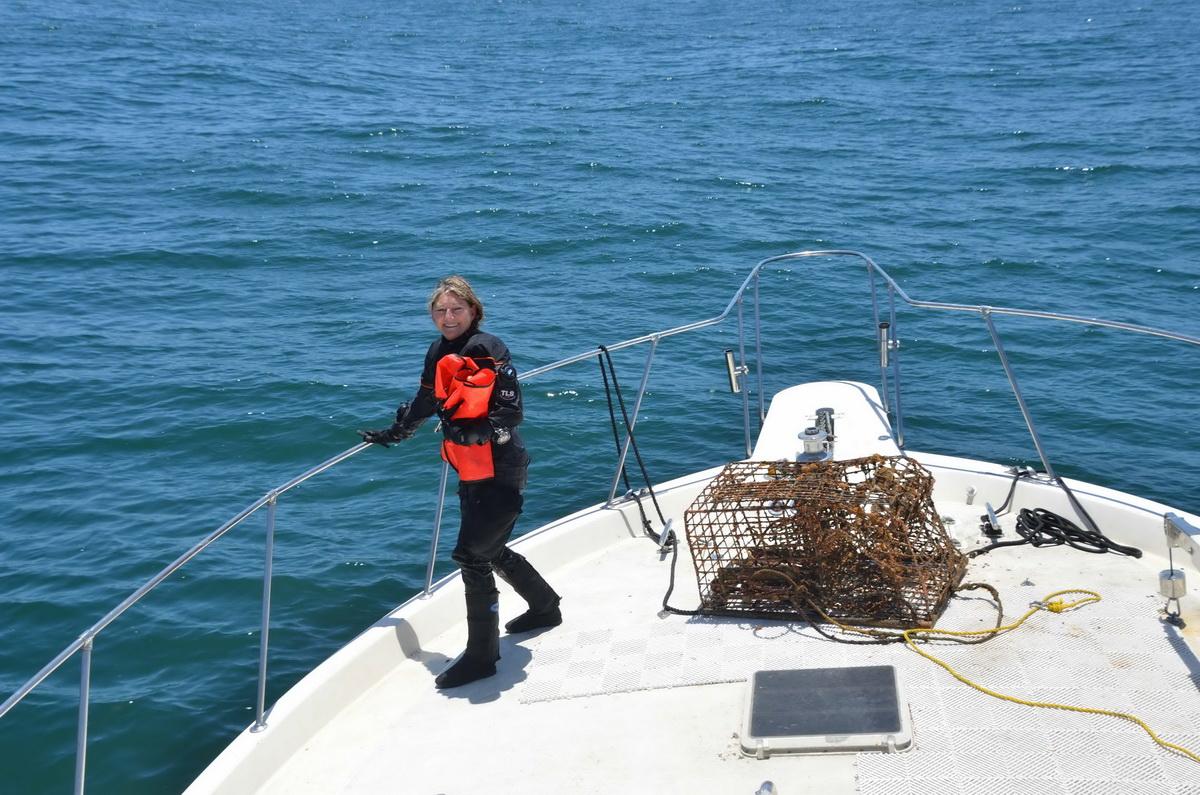 Don’t you love this picture of Kim with the trap she just helped bring up out of the ocean?! 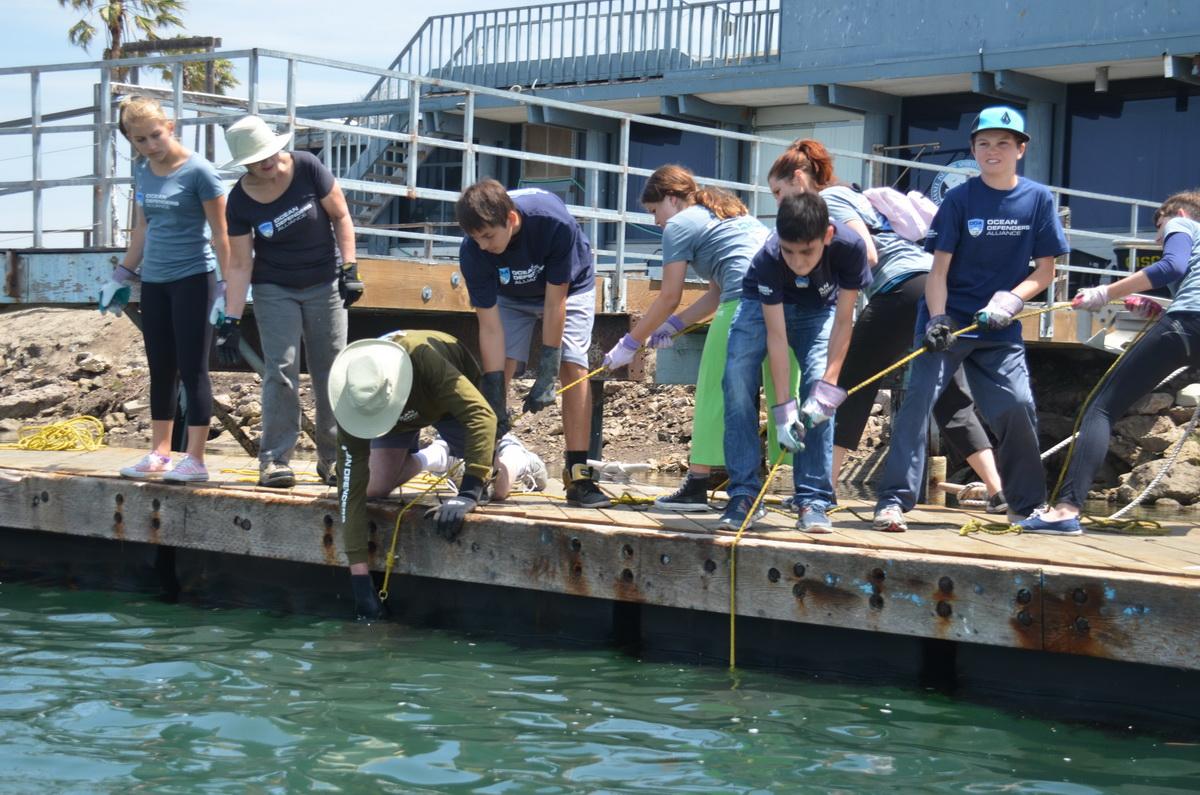 We plan on bringing the LegaSea up to the harbor for a few weeks in July or August to resume our harbor cleanup as well as get out to Anacapa and Santa Cruz Islands.  So, this dive club meeting will allow Kim and I to bring them up-to-date and recruit some volunteers for our projects.

We have other dive clubs interested in having an ODA presentation, but no dates have been solidified as of yet.  Stay tuned to our calendar.

As you may recall, ODA removed a lot of debris from a Marine Protected Area (MPA) last November along the coast of Corona Del Mar, near Newport Beach, California.  We worked with Mike Coufer, who is a scientist researching the plight of the giant sea bass (GSB).  We were focusing on removing any man-made debris that was hindering the migration of the baby GSB and threatening the population. 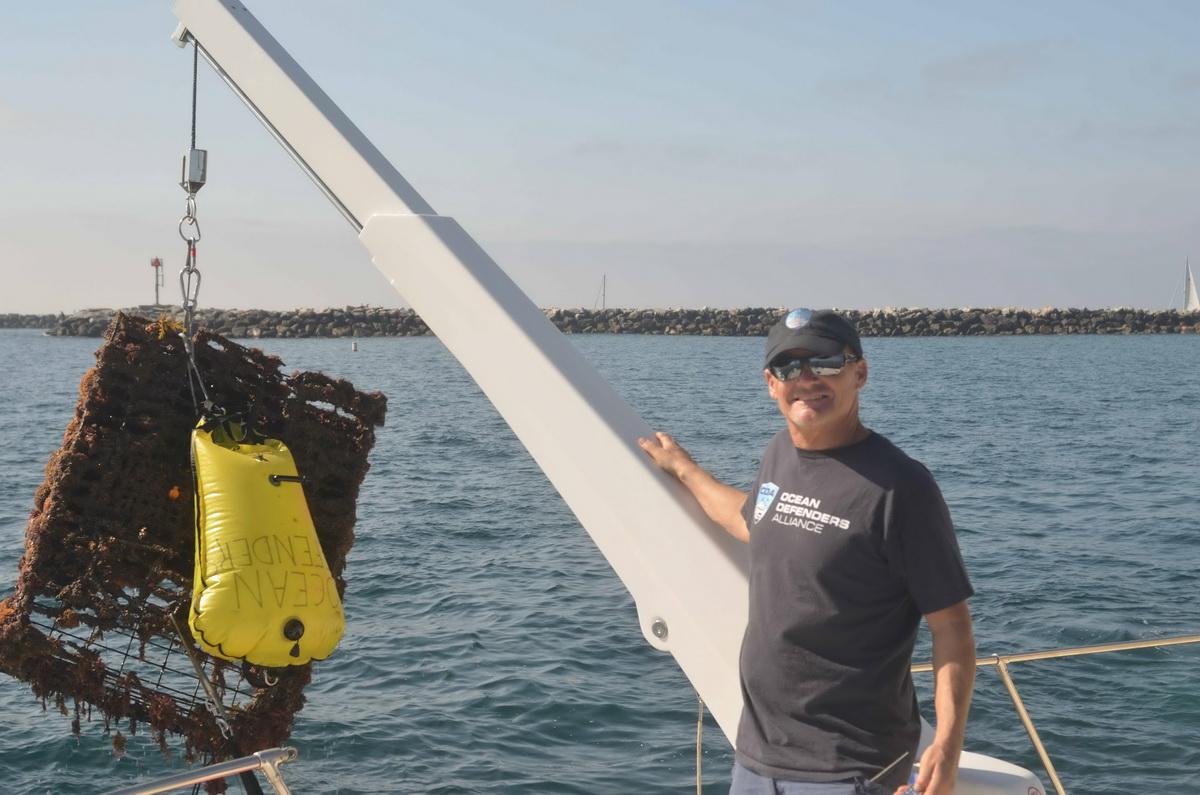 We’ll go back there in May or June to remove more debris, as well as survey a wider area to scout for more possible debris.

An Event Highlighting the High Cost of Fish Farming

A few months ago, I read an article about the efforts of the apparel company Patagonia to make people aware of the damage that fish farming is having on the different salmon populations in the Pacific Northwest. 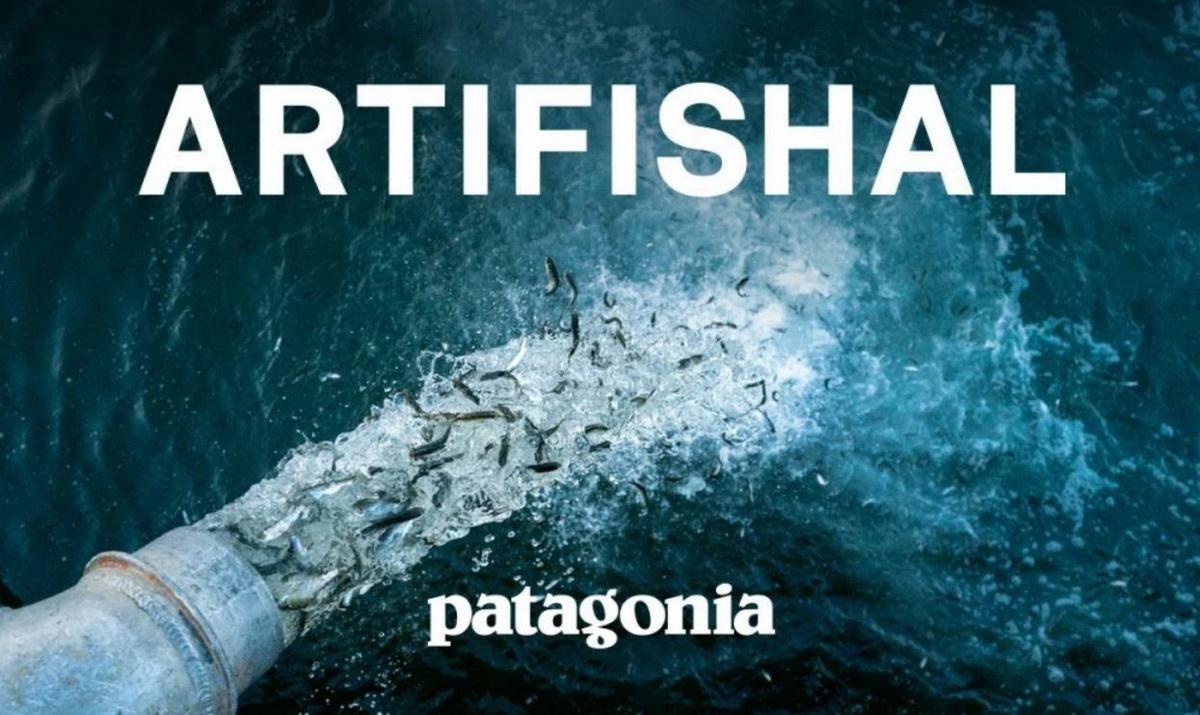 They produced a documentary called ARTIFISHAL and encouraged nonprofit organizations to host a screening of the film as a means of increasing awareness while raising some money selling tickets.

Several years ago, I gave some presentations to people who were interested in ocean conservation in Portland and Seattle.  So, when I read about this opportunity, I contacted Ryan Rittenhouse.  Ryan works for a group called Friends of the Columbia Gorge, where he is the Conservation Organizer.  The Columbia River is severely impacted by a set of 13 dams that block the natural migration route of millions of salmon every year.

Ryan took the lead and found a theater that let us show the film, Hollywood Theater.  Beautiful building, huh? 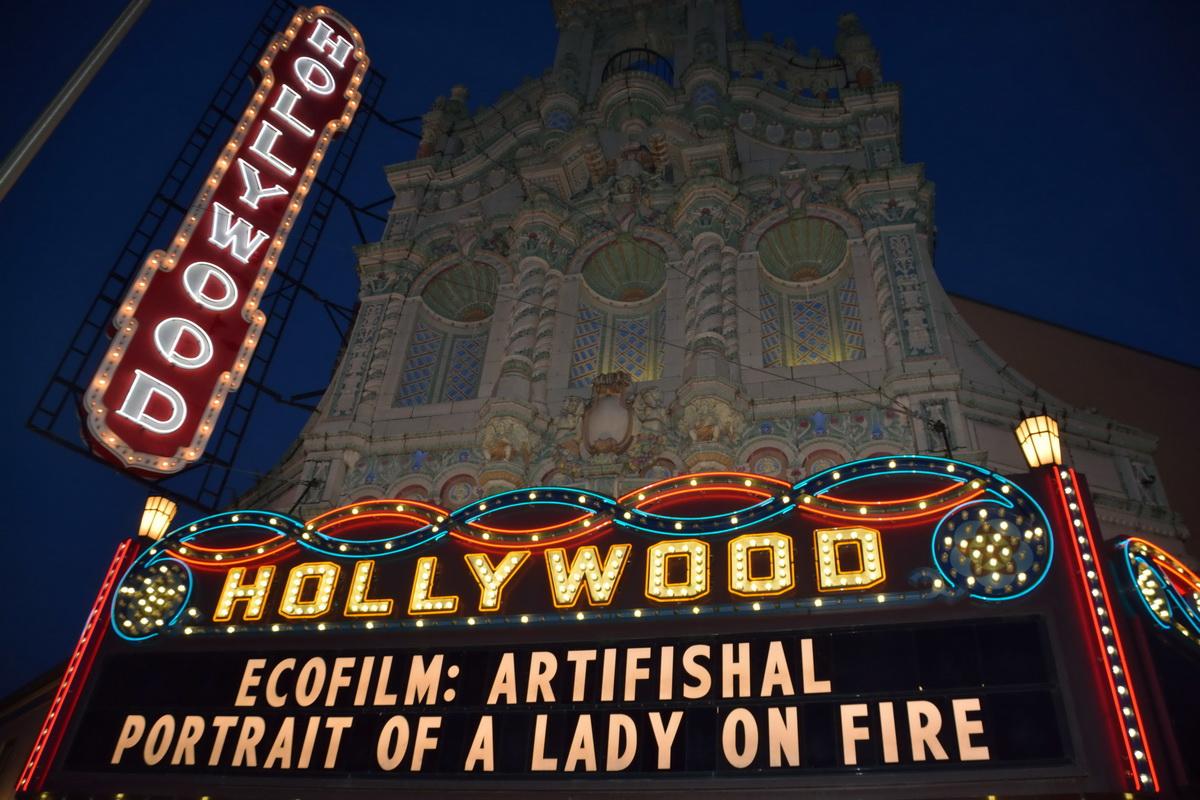 Then on March 5th, we had the screening.  Mike Ryan, manager of the local Patagonia store was there, as well as the manager of the theater which is owned by a nonprofit that shows fun movies all year round. 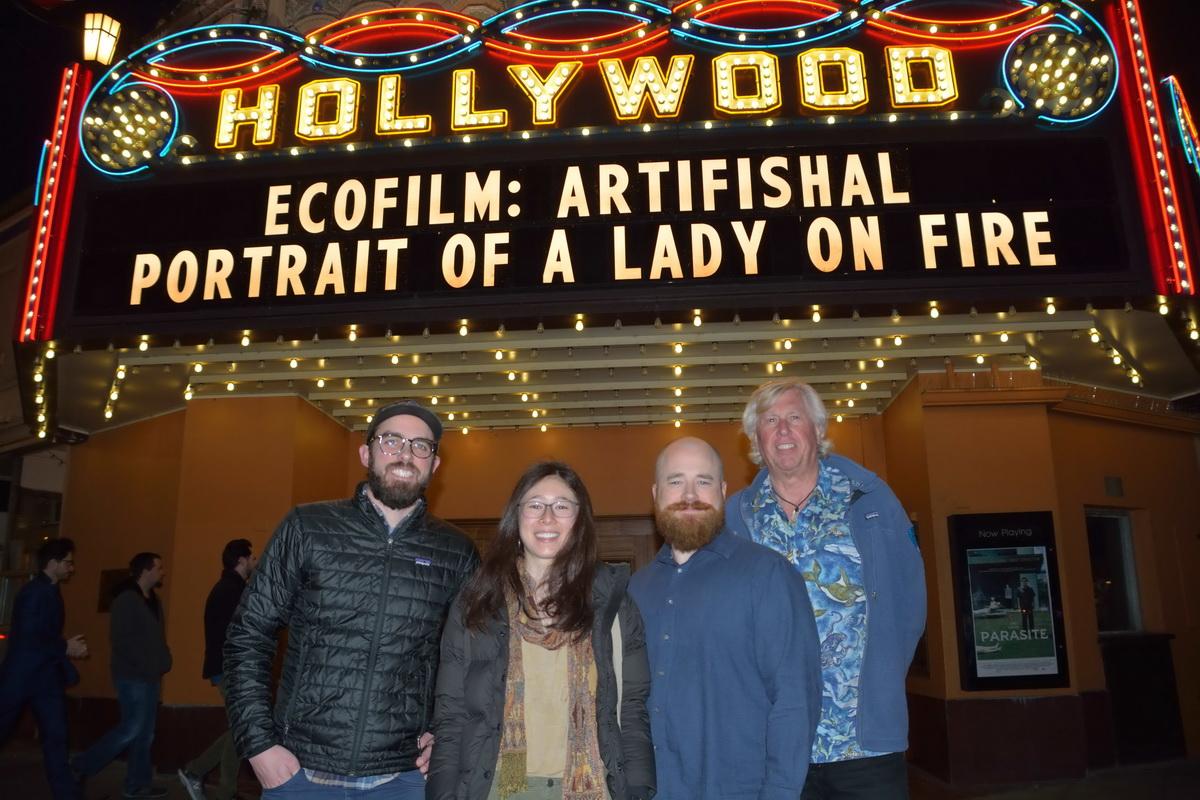 They were expecting about 200 people to show up, but because of all the talk about the spreading virus, only about 80 people attended.  After the film ended, Ryan and I answered questions from the audience.  And boy did they have questions!  It was great to hear how concerned they all are about the damage the fish farms are having on the ecosystem and the fish themselves. 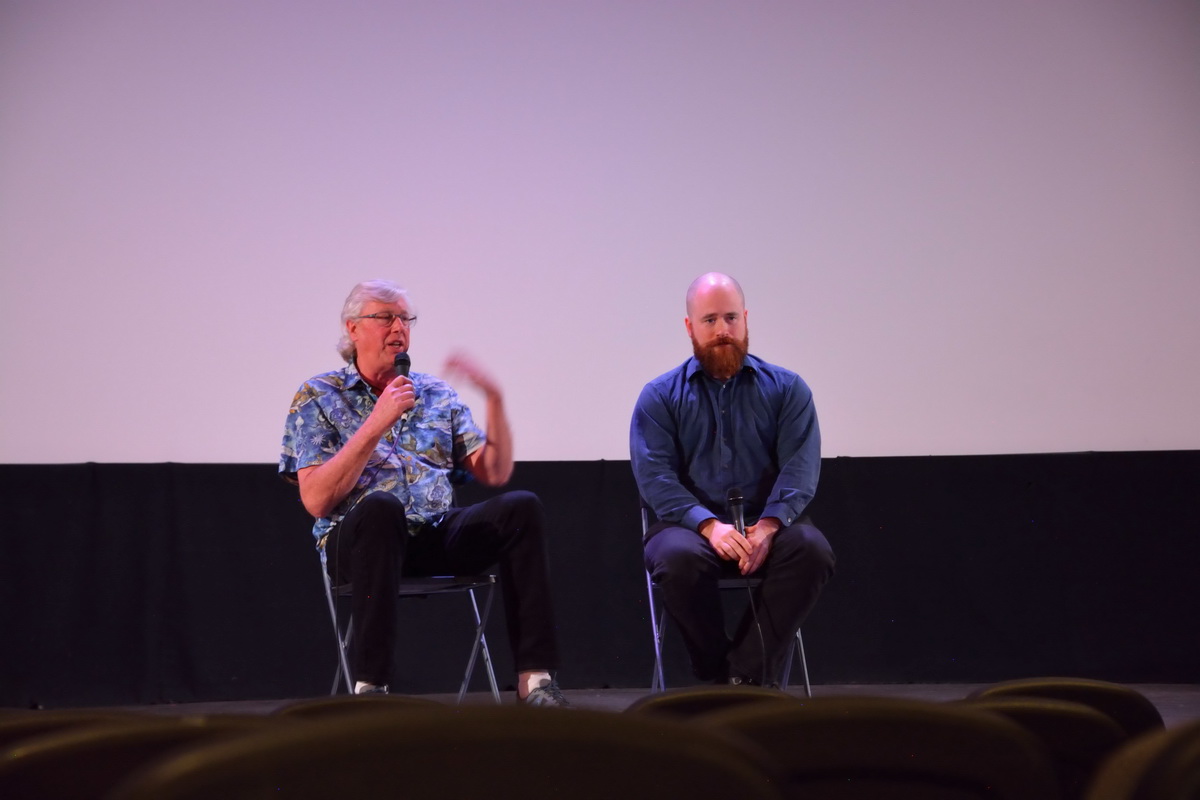 I highly recommend anyone at all interested in hearing about the plusses and minuses of fish farming in general, but especially about salmon, to watch the film.

I realize that discretionary spending is not on people's minds right now as we all struggle to meet our financial obligations: rent, food, health insurance, education, childcare...the list goes on.  But if you do have some extra in your bank account, ODA has a special opportunity to receive MATCHING FUNDS from GlobalGiving of donations up to $50.00!! They're offering this through tomorrow (Friday 25-March-2020). Thank you!!

There is a lot more going on in the ODA world, and I hope you will continue to follow us during these stressful and trying times.  While we’re watching for our own health and that of our family and friends, please keep nature in your thoughts as well.

Be kind to all beings…

And really, we mean it! Please stay in touch with us. Just scroll down to the bottom of this page -- you can click our social media links and join our eNews list! 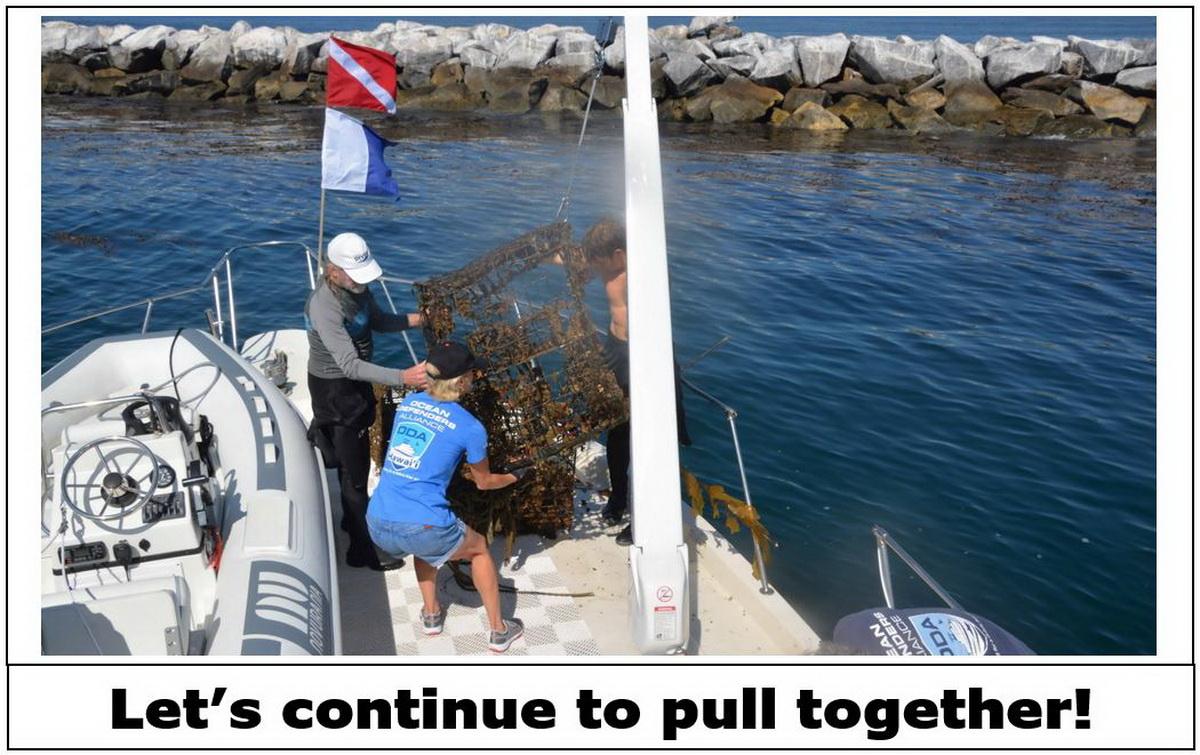