Status & Field Report - Fall 2010 New Generator Gives ODA More Power to get back in and under the water! 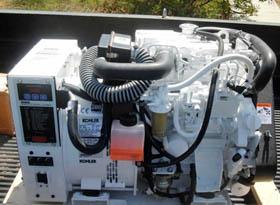 In the middle of what was looking to be a very productive summer, we were stopped dead in our tracks in July by the unexpected mechanical failure of the Clearwater's inboard AC-power generator. The old diesel generator provided electricity to several key components while out to sea, including the anchor windlass to help lift our extremely heavy anchor (too much for human hands). Up until July, ODA had been on a roll, going out almost every weekend during the months of May, June and some of July.

Even though we were not able to motor out and dive, we forged ahead full-steam with our team of dedicated volunteers on the repair and associated projects. So many people put in hours and hours of time, first trying to figure out if we could salvage the aging generator, then coming to the conclusion that she could not be saved and would have to be extracted from the boat and a new one installed.

No small feat considering our limited budget, and even more so, our limited experience with such a critical component of the boat's operating system. John Milligan, as always, stepped up to the plate and was down in that small compartment they call the bilge, working for hours at a time. When he got to the point where there was no more hair on his head to scratch, we called on expert John Kreiger, who owns his own boat repair business.

As you can imagine, the last thing anyone wants to do in their free time is to work on a project that they do all day. But John K is different. He consulted with us over the phone and when we could go no further without his direct help, he came down to the boat on his weekends and even after work. He spent several full days in the bilge with John M, first disassembling the old generator, and then installing the new one.

Scotty, this is Capt. Kurt - The ship needs more power!!

Many people also spent many, many days on this project. Jim Lieber, Jeff Connor, Jeff Shaw, Al Laubenstein, Bob Walls, and Billy Arcilla all helped out tremendously on a very time consuming, smelly and dirty job. We also had the dynamic duo of Ford and Tilly, the wonder dogs, to keep our spirits up. I'd also like to acknowledge ODA's Acting Executive Director, Scott Sheckman, who performed his magic from his new home base in S. Florida by contacting several generator manufacturers and negotiating a significant discount on a powerful brand-new generator made by Kohler (thank you Kohler and local distributor Boatswain). Scott has also done a great job on the website, public relations, and fundraising for the generator as well as our modest annual budget.

On the full moon of September 23, John Kreiger, Jeff Connor and I met up and took the Clearwater over to a shipyard in the bowels of Wilmington and had a crane operator gently remove the old one and lower the new one in as we maneuvered the 400 pound genny into her new home. It took us two 9-hour days to complete the installation. On Sept. 26, John K, John M and I sat there in amazement as the generator started up on the first try!! Way to go guys, you are amazing!! Not only will this new generator provide ODA (hopeful) consistent and reliable power, but it's rated at over 9KW, which should provide us with all the juice we need for additional equipment, such as an onboard scuba tank compressor!

During this semi-down time I was also busy conducting outreach and attending conferences. One event that stood out was the Blue Ocean Film Festival, in Monterey, held over 3 days, August 27-29. I attended all 3 days. It was great to be amongst such dedicated ocean activists. The art of moving pictures is a very powerful medium to convey our collective message. And there were several seminars and films that spoke directly to those of us on the forefront of educating the public on what humans are doing to the habitat and inhabitants of our underwater world.

Carl Safina gave a very special presentation on how politics play a crucial role in reining in the commercial fishing industries total disregard for the health of the oceans. Chris Palmer gave a great seminar on how best to pitch your story to the media, and how to raise the money it takes to work on projects.

Of course, the show-stopper was Dr. Sylvia Earle. At the young age of 78 (her birthday coincidentally celebrated with the gang), she is spry, full of life, and has a sparkle in her eye whenever she is talking about the oceans. Sylvia is a great inspiration and I got to talk with her on several occasions over the course of the weekend. She loves what ODA is all about and fully supports our efforts to remove abandoned fishing gear from the oceans floor.

On October 3, a film crew from KTLA (a major Los Angeles television station) joinedODA aboard the Clearwater to film a segment of a special program entitled "Healing the Bay" highlighting local and international ocean issues and S. California organizations that are trying to improve the health of our regional waters. The one hour special aired on Sept. 18 and 19 and it was awesome on all levels. Despite bad weather (dense fog) and poor sea conditions, KTLA was able to get the coverage needed to put together a great segment on ODA. Our thanks to KTLA's Angel Kim for organizing the outing and to Larry Fleece for spending the day with us on the water interviewing the ODA crew aboard. The team that day was: Jim Lieber, Holly Gray, Jeff Connor, Al Laubenstein, Bob Walls and Cameron Freels. Also, special thanks to Johnny Walker, Bill Bushing and Elaine Jobim for letting us use your wonderful images for the program.

On September 28, I gave a presentation to the Sierra Club of Mission Viejo. I saw many familiar faces there, including Ray Heimstra and Sharon from the OC CoastKeeper. Ray gave a nice update on the Marine Protection Act (aka Marine Life Protection Act, MPA and MLPA), and where it stands today. Speaking of which....

On October 20, there will be a meeting on the MPA in San Diego. If there is ANY way you can attend, I highly recommend that you do. This is a very unique opportunity for the public to actually stand up and be heard. If you cannot attend in person, PLEASE send in a letter of support for Proposal 3. This is the best, of the many options, that is most based on science. Profit for a select few individuals should not take precedence over the biological health of our local waters. Heal the Bay is organizing a bus to ferry people to the conference in San Diego. If you have the time, please contact Dana Murray to make arrangements to get a seat on the bus. This is the last opportunity to have your voice heard before the final decision is made regarding the MPA boundaries. Dana's contact info:

Finally, Back in the Water!

In the early morning of Sunday, 10-10-10 (last time we'll see that unique date for a while), ODA pushed off from the dock armed with our new Kohler generator. It was a gorgeous day for diving. Flat seas with overcast skies. We headed to the Old Marineland Platform. After several tense minutes of trying to locate the site using our GPS and depthfinder, I felt confident that we were right above it and dropped the anchor.

The dive team consisted of Al Laubenstein, Jeff Shaw, John Kreiger, and new to ODA: Heather and Karim Hamza. Heather is a Dive Master and Karim is a Dive Instructor. We were very excited that they decided to join us. What we do down there is not for amateurs, and the Hamza's bring a ton of experience as well as education with them. Afterwards, even they admitted that ODA's brand of diving can be very difficult and perilous, and that safety should always be a top concern. We couldn't agree more! Jim Lieber (First Mate) and Cameron Freels did the thankless job of providing deck support.

Within 5 minutes of the divers descending, a float popped up at the surface. They already had cut a section of the sunken net. After a 25 minute dive, they all came up and had a big bag stuffed with abandoned net. They said there was a LOT more down there. Turns out the anchor was 10 feet off the site. After a surface interval and they dove again. Karim had done some filming on the first dive, but on the second it was decided to skip the filming and just start cutting. I went down just to see what the site actually looks like and did some filming of the crew in action.

Action it was. The Platform is roughly 30 feet by 50 feet long. It is just a bunch of 8-inch diameter tubes welded together, that created a structure for people to stand on. Not sure when it was sunk, but it has been colonized by club anemones of all colors. The only area that was not covered in life was the area where the net was located. There were numerous fish hanging out, with about a dozen really pretty rockfish laying about, just waiting for a meal to swim by. Some species of rockfish are known to live to about 150 years, and a couple of these were BIG. Indicating that they were pretty old.

Watching these professional divers in action is quite amazing. There were two people pulling the net taut, while 2 others were cutting away. Visibility was about 15-20 feet, but where they were cutting was almost none atoll – they couldn't see their hands in front of their faces at times. But they were all focused as a team. Each one had their job and they made sure no one was in a situation to get hurt. The fifth person was functioning as the safety diver, making sure the net stayed off of the cutting crew.

After another 25-min dive, they all came up with quite a haul. It was immense. The pile looks modest when clumped tightly on the deck. But when we got back to the slip you could tell the net would easily cover the Clearwater two-times over. We estimated the retrieved net weighed roughly 150 pounds, but the squared footage boggles the mind. The mesh size is half-inch. So wildlife that gets caught in it becomes a another sad victim.

It was a GREAT feeling to be out on the water again. We were elated to be back doing what we do. Thank you everyone for helping us make this happen. All the volunteers, as well as each of you who donated your hard earned money, including our growing list of institutional donors.

We are on a roll till the winter storms start up.

Lets keep this going – as many of you know – ODA's work is SO REWARDING!