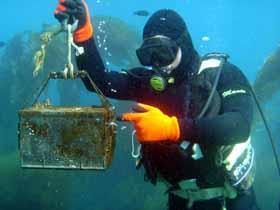 During the month of October, 2009, a concrete hulled sailboat that was anchored in Whites Cove, broke free from its anchor during a storm and sank when it struck an underwater rock near Rattlesnake Canyon just off the coast of Catalina Island. While this is not necessarily news, what was troubling to local divers was that the boat had several items onboard that are considered hazardous waste.

In November, I was talking with Jason Manix of Avalon, Catalina Island, about a project we have been working on (removing a net from the wreck of the Infidel) when he mentioned this new wreck. Knowing that the ocean is an especially corrosive environment for man-made items, we decided to do something about it.

Jason contacted the United States Coast Guard and found out that a complaint had been filed with them and they have it listed on their roster of wreck sites to investigate. Unfortunately they have a waiting list for these types of projects. It could take a year for them to decide what will be done or to issue the owner a notice to remove it at his own expense. The marine life that are being affected couldn't wait.

Jason, William Flickinger and Cinde MacGugan did a couple of dives on the site to take an inventory of the hazardous items that were immersed: 5 large lead acid batteries, a battery charger, several cordless drills, and several paint cans. The boat was privately owned, 40-feet long and sank in approximately 20-feet of water.

On Sunday morning, Jan 10th, 2010, several volunteers from ODA took their own boat out to the site and carefully removed the most toxic items. We all owe a debt of gratitude to Jason Manix, William Flickinger and Bert Skura (u/w photographer) for taking the time and energy to clean up this potentially dangerous wreck site. Jason and William are residents of Avalon, and Bert traveled from his home in Santa Clarita, CA. The cost of the operation was paid for by ODA, and we anticipate our Catalina team will be doing more of these types of clean-up jobs in the waters around Catalina.