Even though the sun wasn’t out, our spirits were bright…

On Sunday, June 2nd, we boarded our flagship Mr. Barker’s LegaSea with six people onboard and prepared to head out to a sunken boat wreck off the coast of San Pedro, California. 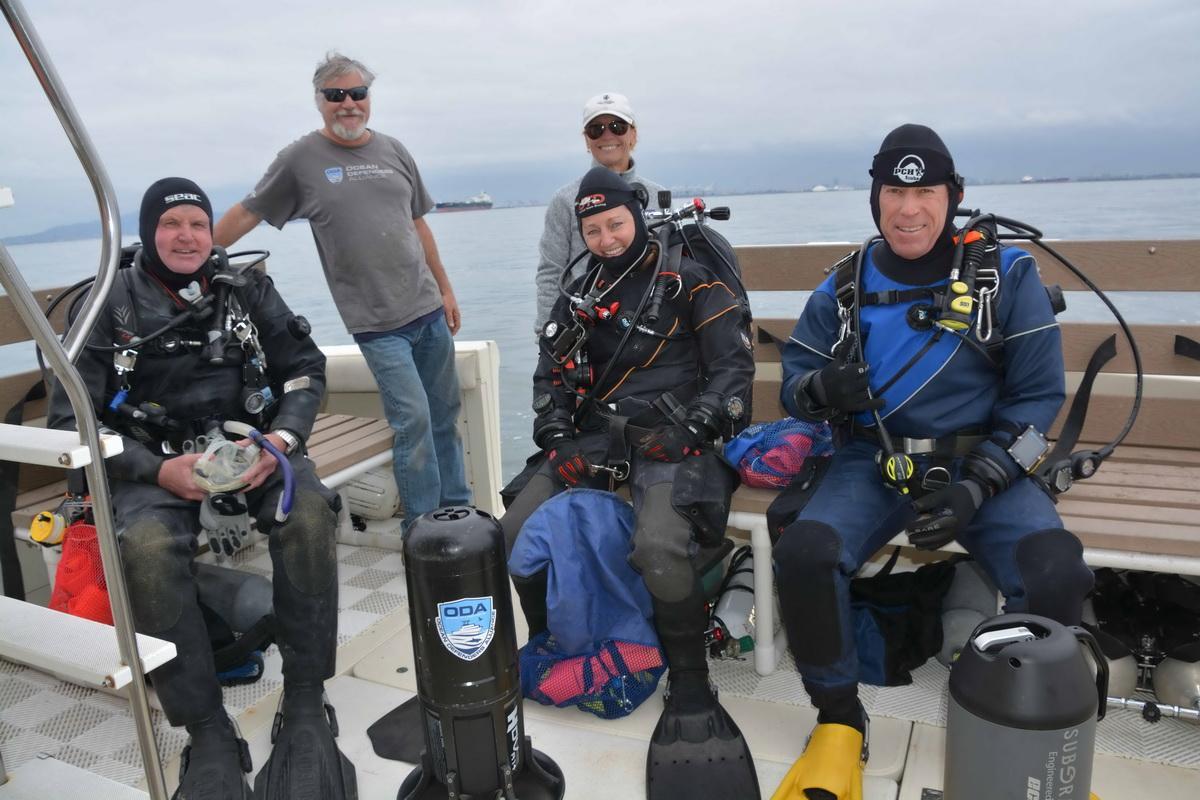 The divers for this outing were veteran ODA volunteers: Kim Cardenas, Al Laubenstein, and Geoff Walsh.  Rounding out the crew topside were Jeff Connor and Sue Walsh.

This was our first time out in about six weeks, as the vessel was having a new davit installed.  We were anxious to see how this new device would work for us.  Because it was our first time using it, we decided to take the RIB off the LegaSea and tow it behind us to the dive site. 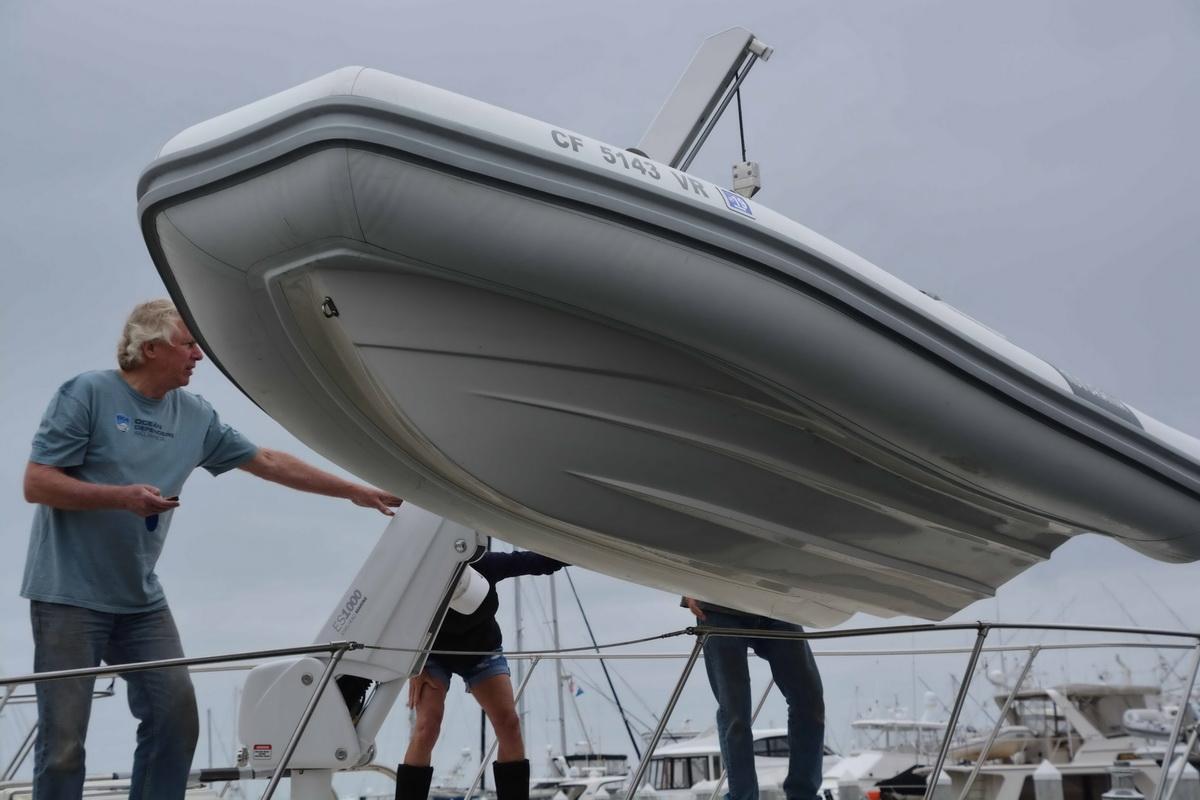 The davit worked like a charm.  It plucked the RIB off the front deck and set in down in the water seamlessly.  Jeff jumped in the RIB to get the engine warmed up only to find that the engine wouldn’t start…oh, great. 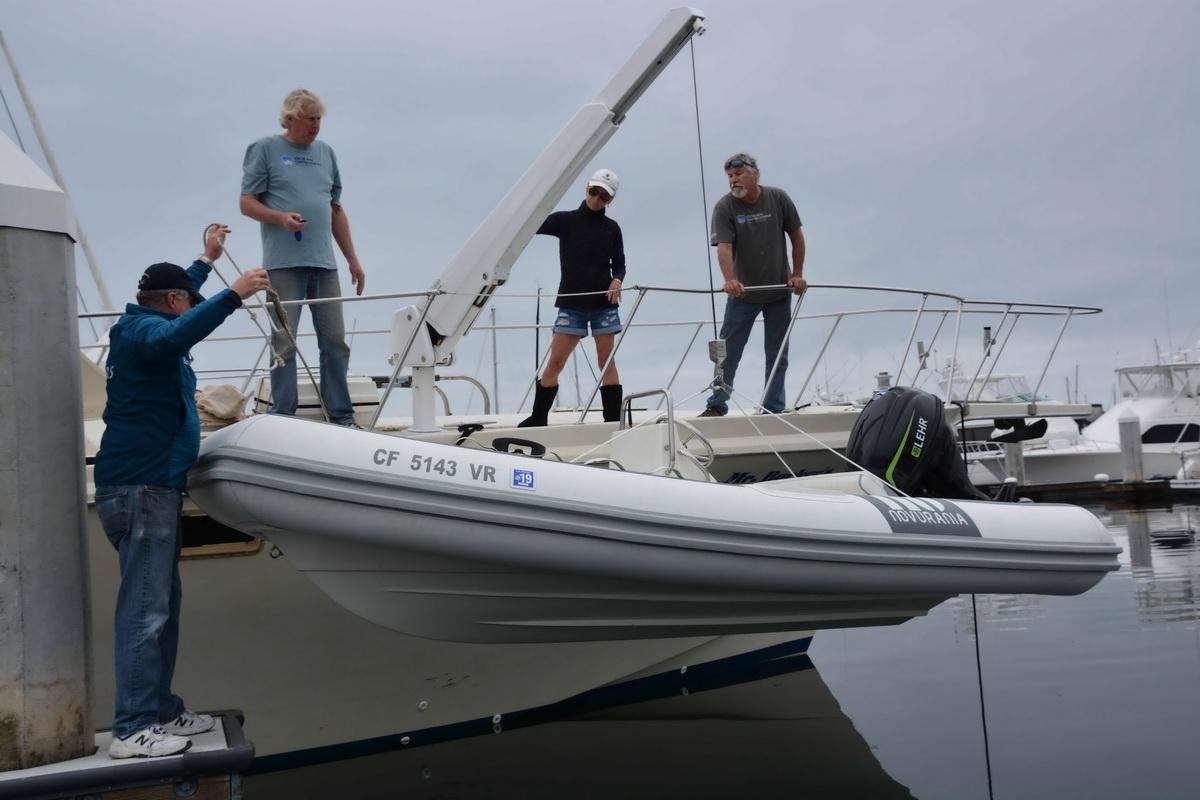 So, we left the RIB in our slip and continued on our way.

The boat sank off the coast of Long Beach around 1930.  It was a 5-masted schooner, measuring 298-feet long.  Because it was made of wood the wreck site is now mostly a low-lying mass of debris.  But the fish and lobster still use it as habitat.  We’ve been here numerous times before and never fail to find marine debris.

Kim, Al, and Geoff jumped in the water with their tanks and scooters and headed up to the bow where they teamed up to drop down the anchor chain. 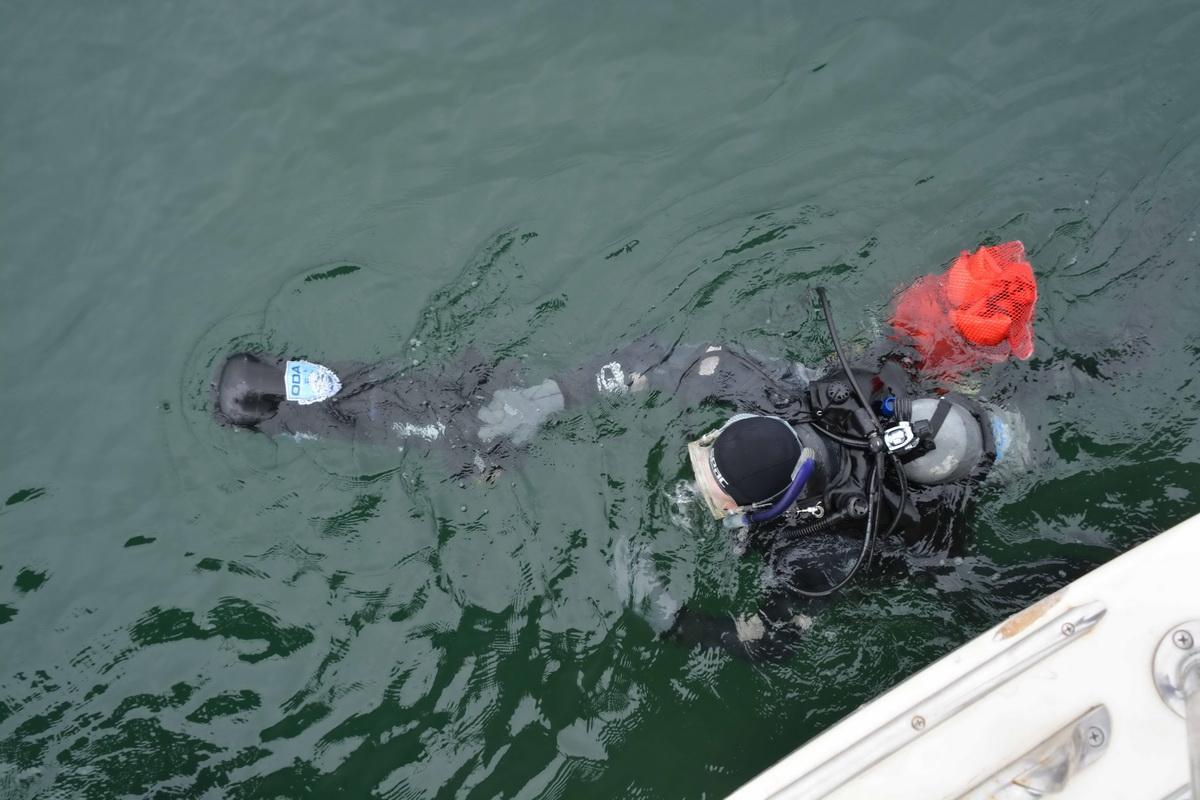 As they were making their way, Jeff, Sue, and I could see that the visibility was going to be bad.  How bad we didn’t have a clue, but we soon found out.

The seas were nice and flat, and we could see the divers’ bubbles breaking the surface, so we could keep track of their underwater progress.  Once we saw them stay in one place for a while, we felt confident that we’d be seeing lift bags shortly thereafter.

And sure enough, we saw two sets of bags pop up a short distance away from us. 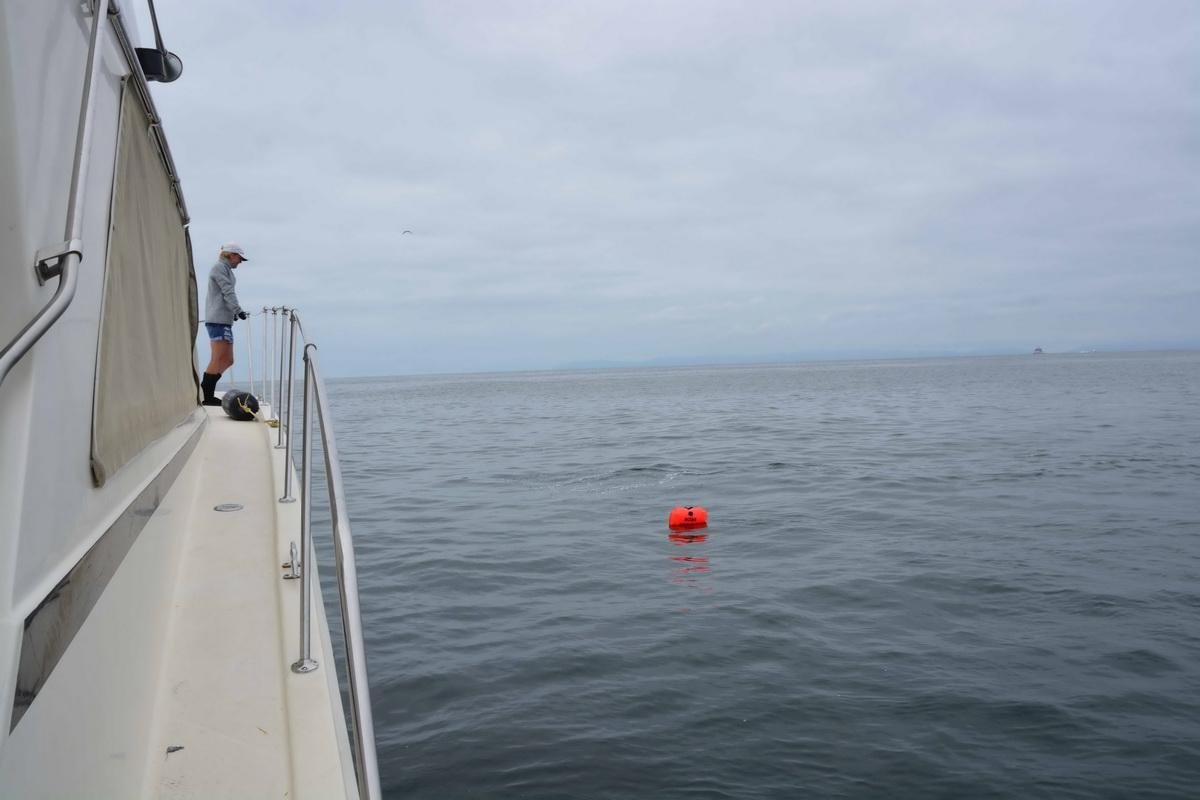 The divers surfaced about 30 minutes into the dive, which was strange because they could have been down for a lot longer time.  When they got back to the stern, we found out why.

The underwater visibility was horrible, less than five feet.  It’s next to impossible to find anything in that kind of environment, and it is REALLY easy to lose sight of your dive partner.  This did happen at one point when Geoff became separated from Kim and Al.  So, even though they did find one trap, 200 feet of trap lines, and a fishing pole, they decided to call of the remainder of the dive for safety reasons. 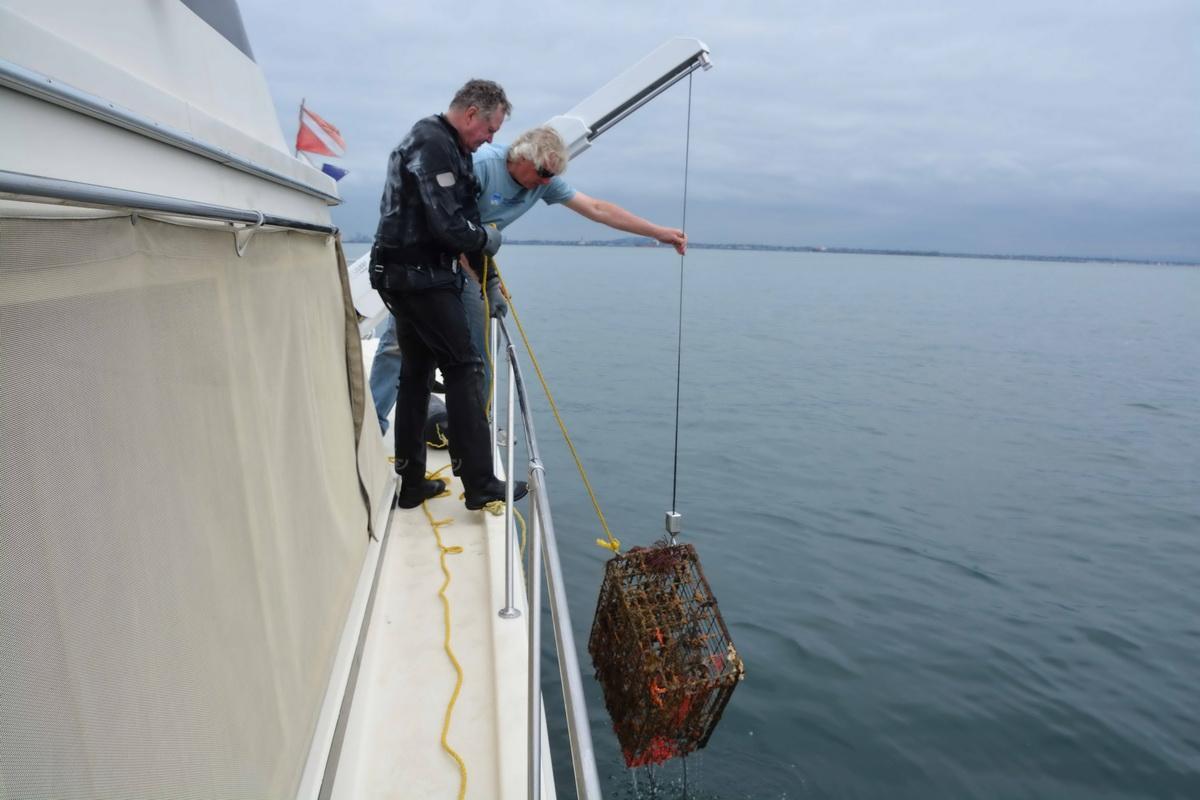 After we got the trap and other debris onboard, we decided to try a second dive at a site that might have better visibility. 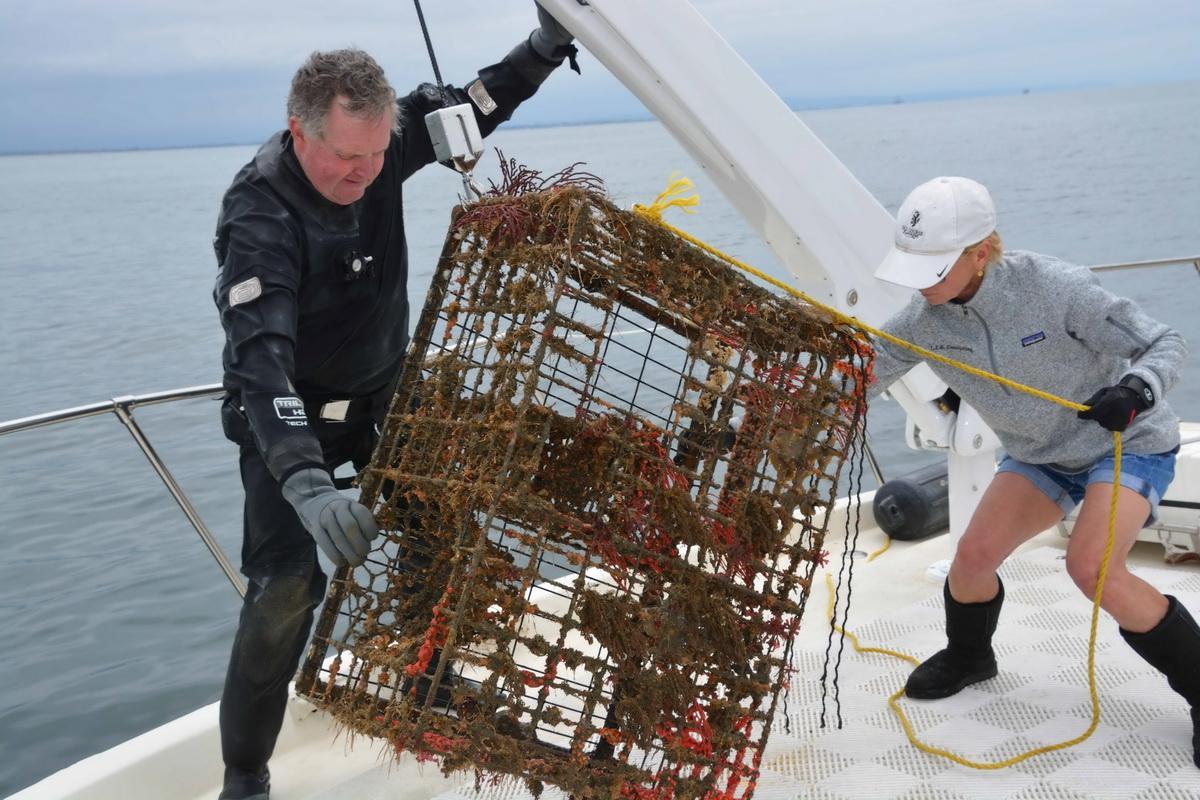 So, we headed to the Long Beach breakwall to assess the situation there.  It was no better, and there were several fishing boats in the area.  With that many hooks in the water AND the bad visibility we decided to call it a day. 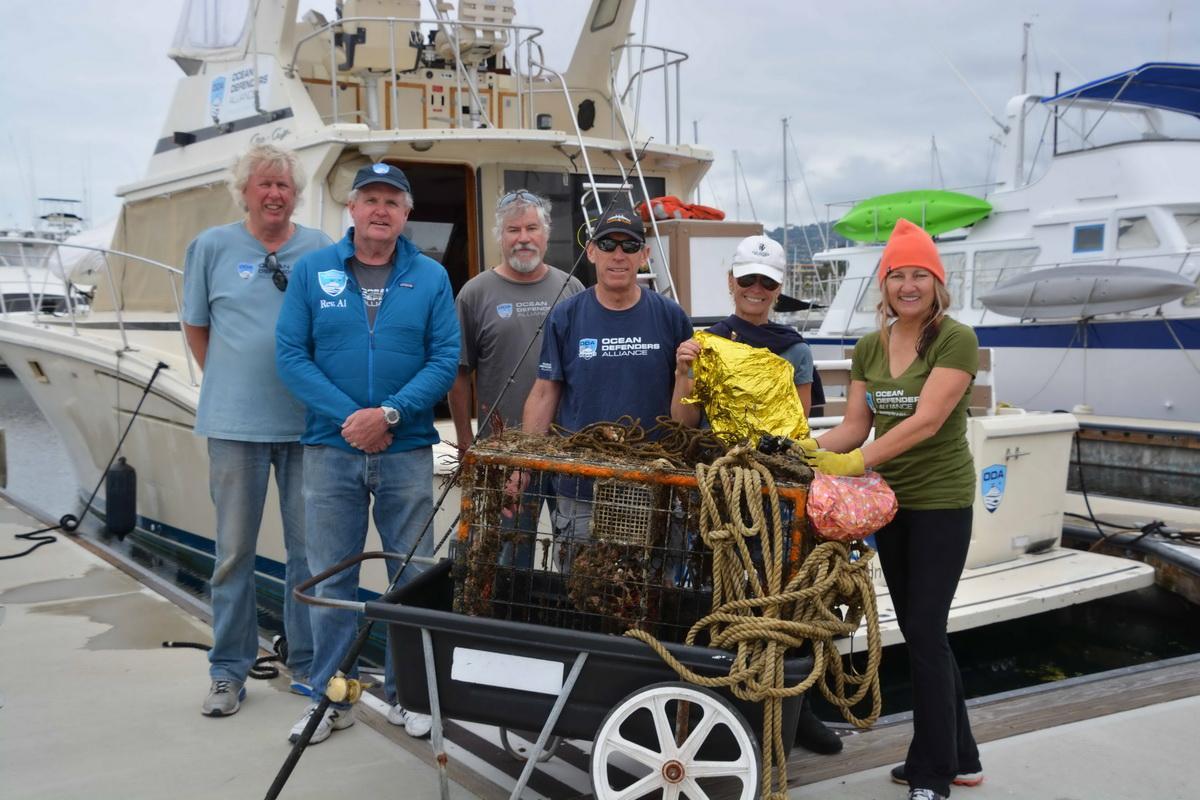 Thanks Kim, Al and Geoff for diving in, and Jeff and Sue for all the deck support!

We’re so thankful to have an excellent-working davit, so a big shout-out to everyone who supported our annual fundraiser “Dockside Dinner and Drinks” as we raised most of the funds necessary to purchase this necessary piece of equipment!

If you want to donate to support this great, life-saving work, please visit our donation page now.