You may be wondering, whatever happened to the LegaSea?  Well, we went through a very lengthy process, but at no cost to ODA (through the AQMD) we had new engines and transmissions installed. Now we’re going through a required testing time where we have to “break in” the engines. This means we need to put 50 hours on each engine while running it at varying speeds. 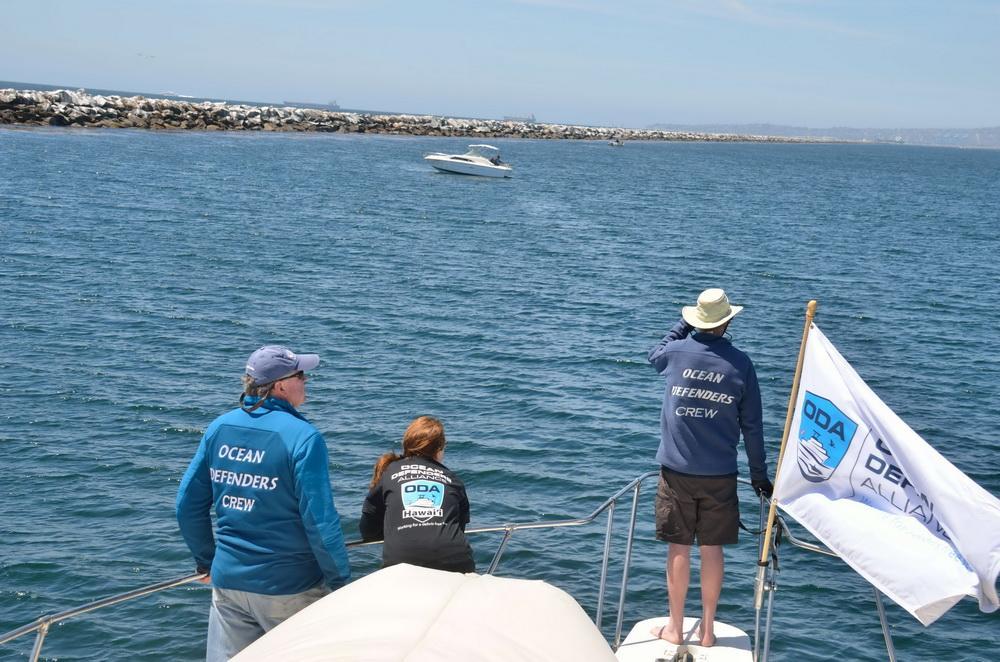 While we’re doing this, we also make it a point to motor through some MPAs (Marine Protected Areas) to make sure there is no illegal fishing taking place. If we observe any such activity, we politely inform them that it is against the law to fish inside these zones. Most of the time the fishermen thank us for informing them, but if they continue to hunt for fish, we call the California Department of Fish and Wildlife to report the incident.

We continue to identify areas in southern California coastal waters with lobster or crab traps set in close proximity to each other. Tightly-spaced traps do not allow room for whales to swim between, and they become entangled in the lines that float from the trap to the surface. 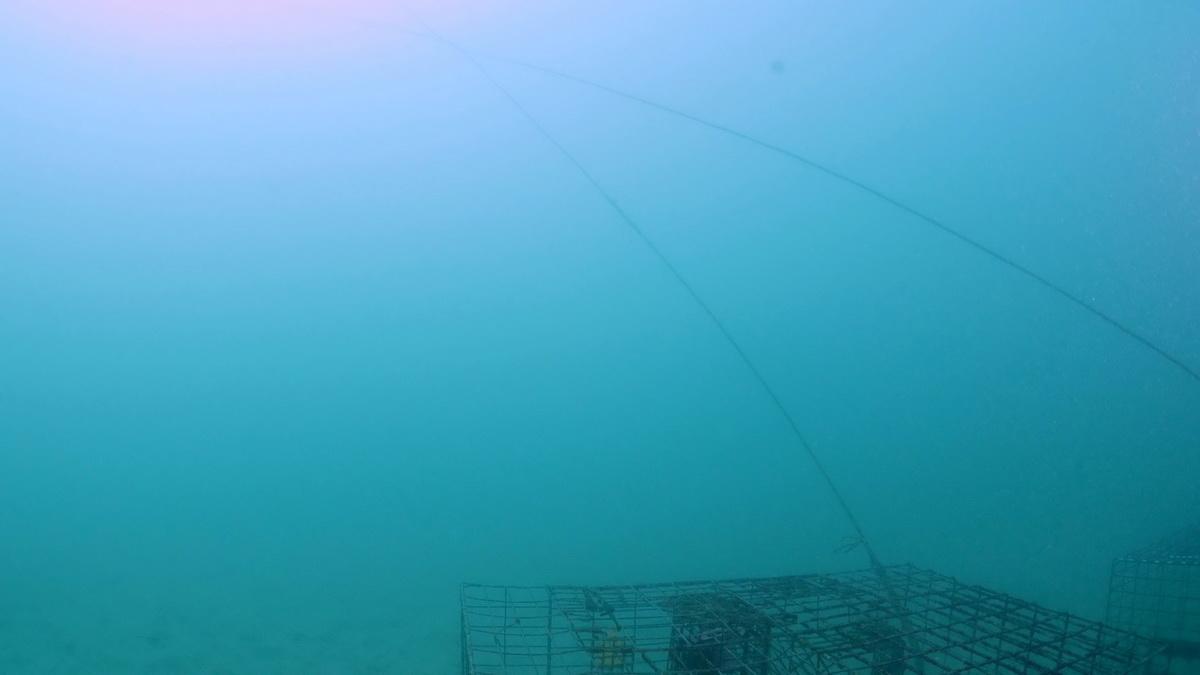 Example of trap lines rising to the surface

When we find these sites, we drive alongside the line of traps and mark each trap buoy using our handheld GPS unit. We have now done this for areas in Laguna Beach, Dana Point, Palos Verdes, and just recently Malibu.

We will be using this documentation to not only educate the public as to the plight of the whales but also to influence fishermen to set the traps farther apart.

On March 8th, Jeff Connor, Jim Lieber, and I motored all the way from our boat slip in San Pedro to Malibu. We had perfect conditions, with flat seas and hardly any wind. Ideal for seeing wildlife along the way. We saw a few whales off the Palos Verdes coast, but they were several hundred yards away from us, so we didn’t get a chance to take any pictures. 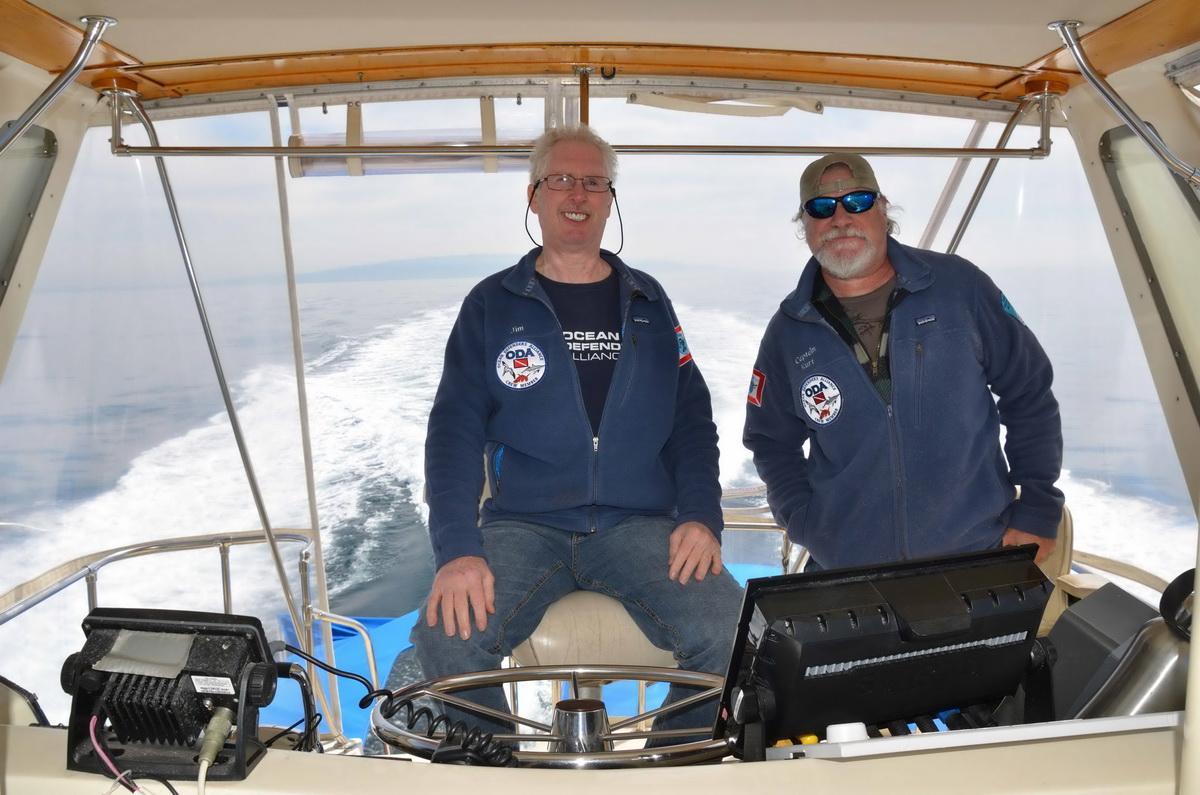 Two and a half hours after leaving San Pedro, we reached our destination: Point Dume. This is a site along the coast of Malibu where whales have been coming for centuries. This is also where the border to Santa Monica Bay lies. And since there is no commercial lobster fishing allowed inside they Bay, the fishermen drop their traps just along the other side of that boundary.

Jeff, Jim, and I spotted what looked like 100 or more trap buoys, in pretty much a straight line. They started really close to shore, in 10 feet of water, and then spread out into roughly 200 feet of water. We slowly moved along that line and did our GPS marking.

You can see the results on this map, which ODA volunteer Chris Bell generously created, using our data. Thanks, Chris!

When we finished documenting that, we saw some whales spouting about a mile away. We headed over there to see if we could catch a glimpse. As soon as we arrived, we started seeing whale spouts all around the place. 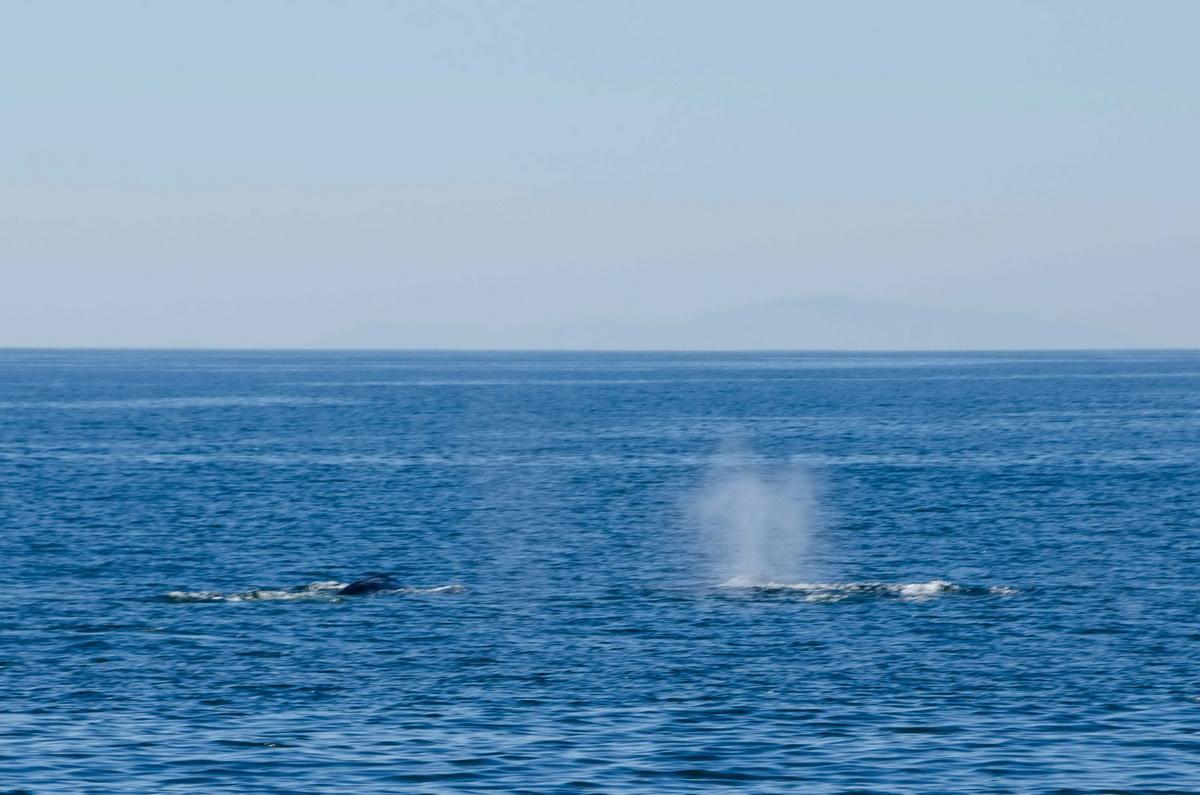 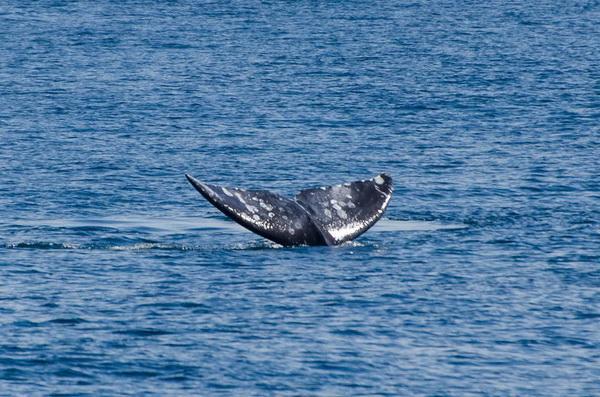 Only a few of them were close enough to get any pictures of, but it was quite a scene nonetheless.

We hung around there for 20 minutes or so, and then saw what looked like boiling water out in the distance. As we got closer and closer we could see it was a pod of dolphins. But this was NOT a regular pod, this was a super pod. There had to be 1,000 animals in it! 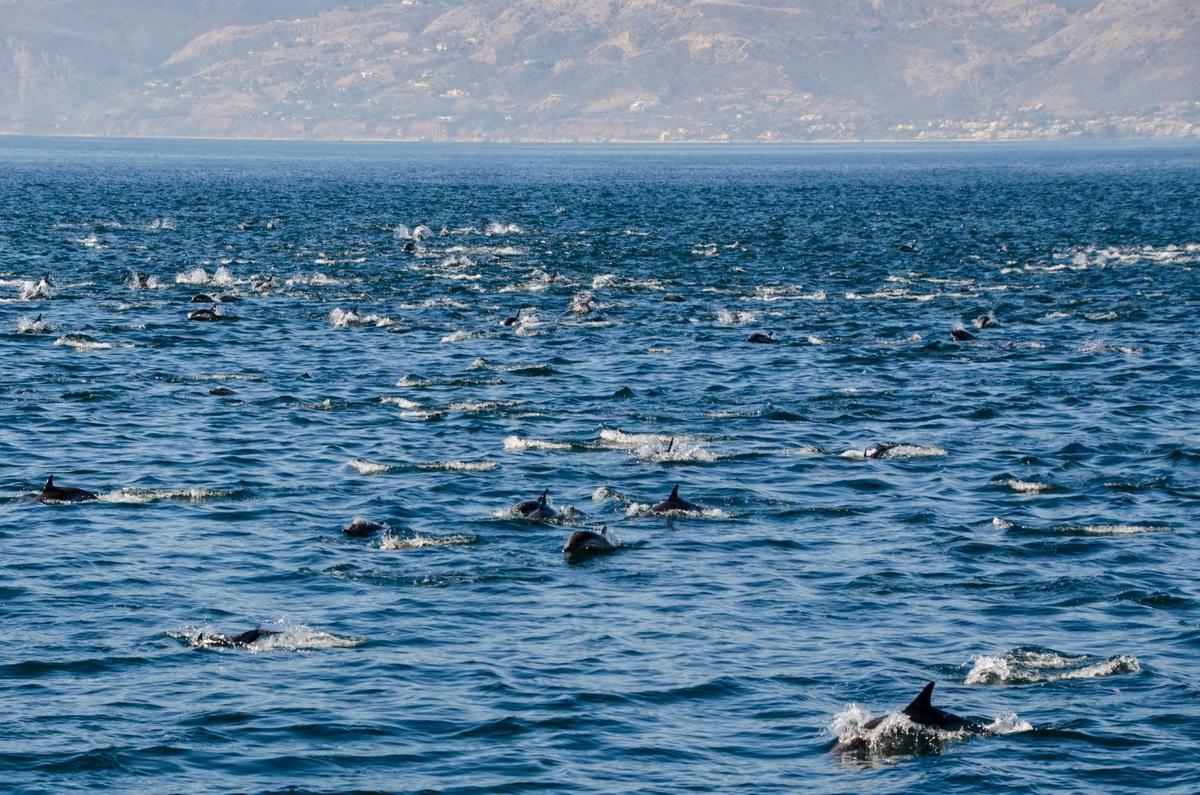 As soon as they heard our boat approaching they headed right for us…they wanted to have some fun and do some bow riding.For the next 20 minutes we were surrounded by common dolphins. It was thrilling, and at one point I stopped the boat entirely and shut down the engines. As the dolphins swam by us, it sounded like a raging river. Raging waters filled with dolphin squeaks and squeals. 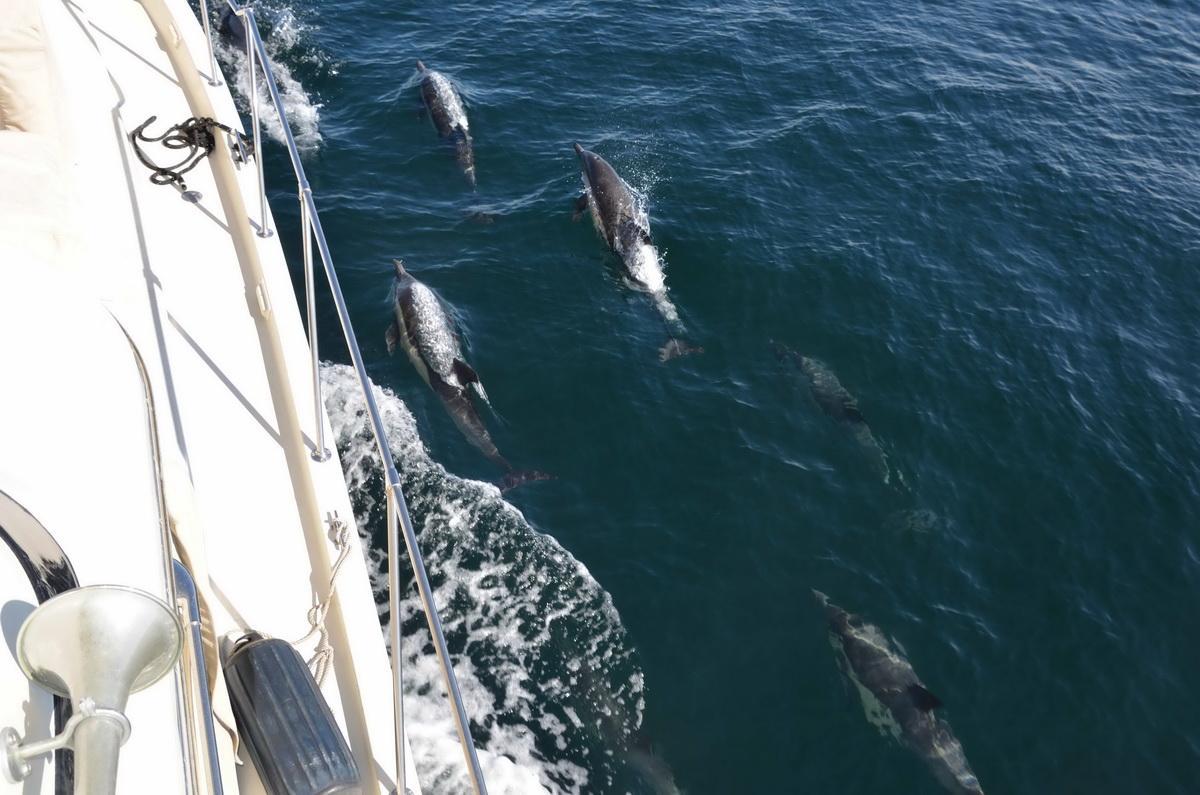 These dolphins, and the whales we just saw, our ODA’s clients. Our organization’s mission is to make their waters cleaner and safer so that they can thrive!

We left them and started heading home, only to find another super pod about two miles away from the first! Wow, what a wonderful experience. It was overcast almost all day, so we didn’t get any great pictures, but the memory is burned into our brains. There are perks to being an Ocean Defender! The volunteer crewmembers always double-down on their commitment to clean the oceans when they see its beautiful wildlife.

I’m happy to report that aside from the exhilarating sightings, the boat ran great and we were able to log six hours on the engines. We’re chomping at the bit to get out there again.

As our most experienced crewmember, Jim Lieber (mentioned above) used to do most of the tasks we focused on this day, but he is back in Ohio for the time being, so we are starting to train more people on how to operate different systems on the boat.

On Sunday, March 25th Gary Appel, Billy Arcila, Al Laubenstein, and Brooke LaDuecuer showed up to learn how to: run the generator, operate the davit, haul the anchor in and out of the water, and how to safely get the RIB (rigid inflatable boat) on and off the LegaSea. 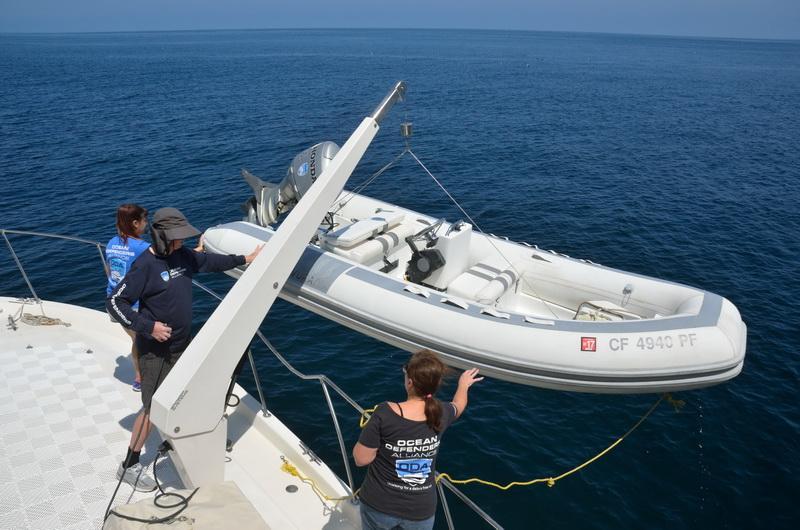 Example of launching the RIB with hoist

We trained on the generator first, then moved on to the anchor. Then as we started to cover the RIB operations, just as we had lifted it off its cradle and swung it over the side of the boat…the hydraulic hose burst! That hose is what delivers hydraulic fluid to a motor that allows the davit to lift a 1,000-pound boat up and down.

As soon as the hose erupted, the small boat dropped down about six inches. Luckily it didn’t drop all the way down in the water, because now we have no way to lift it back up and on to the boat. We quickly got the RIB back in its cradle.  Phew!

Two minutes before this all happened, I had told everyone: Never get your hands, feet, or body underneath the RIB. ‘Cause if it falls, you are going to have 1,000 pounds of boat crashing on you. As it was, when the boat dropped, everyone had stayed clear of the RIB. Training for safety and success!

On March 29th, Dave Merrill and I took the boat out for more sea trials. Dave owns a boat of similar size to the LegaSea, so he is comfortable handling a boat of this size (almost 50 feet). I’m acclimating him to some specific ODA captain’s duties so that when I am in Hawai’i, he’ll be running the boat.

We had really nice conditions with flat seas and no wind. We motored about a mile or two off the coast of Palos Verdes. When we were heading back to port, we noticed something that didn’t look right on the surface of the water. When we got closer to take a look, we found a buoy.  Dave maneuvered the boat close to it and I grabbed it with our boat hook.

As soon as I started pulling on it, I could tell there was something heavy attached to the other end of it. Dave shut the engines down and we tried to pull it up. It was really difficult to get a good grip on the line because there was so much algae growing on it. We would pull about 20 feet of line in at a time and then have to take a rest. Our hands were getting really sore. We were working on this for at least 15 minutes and we still didn’t see whatever it was that was attached to the other end.

I said to Dave that because it was so heavy, it felt to me like a lobster trap that had animals in it…

After 20 minutes we could finally see our prize, and it was a lobster trap. But this was not a normal trap, it was huge. We rarely find ones this size. The reason it felt to me like there were going to be animals in it was because it weighed about 120 pounds. No wonder Dave and I struggled so much with it! The lobster traps we usually find weigh about 75 pounds.

So, after a lot of sweating and groaning, we wrestled that thing up and onto the rear dive step. We secured it in a safe place and headed home. What a nice way to end a good run with the boat. We bagged a trap just by being observant. Lobster hunting season ended three weeks ago, so all lobster traps are supposed to be out of the water by now. 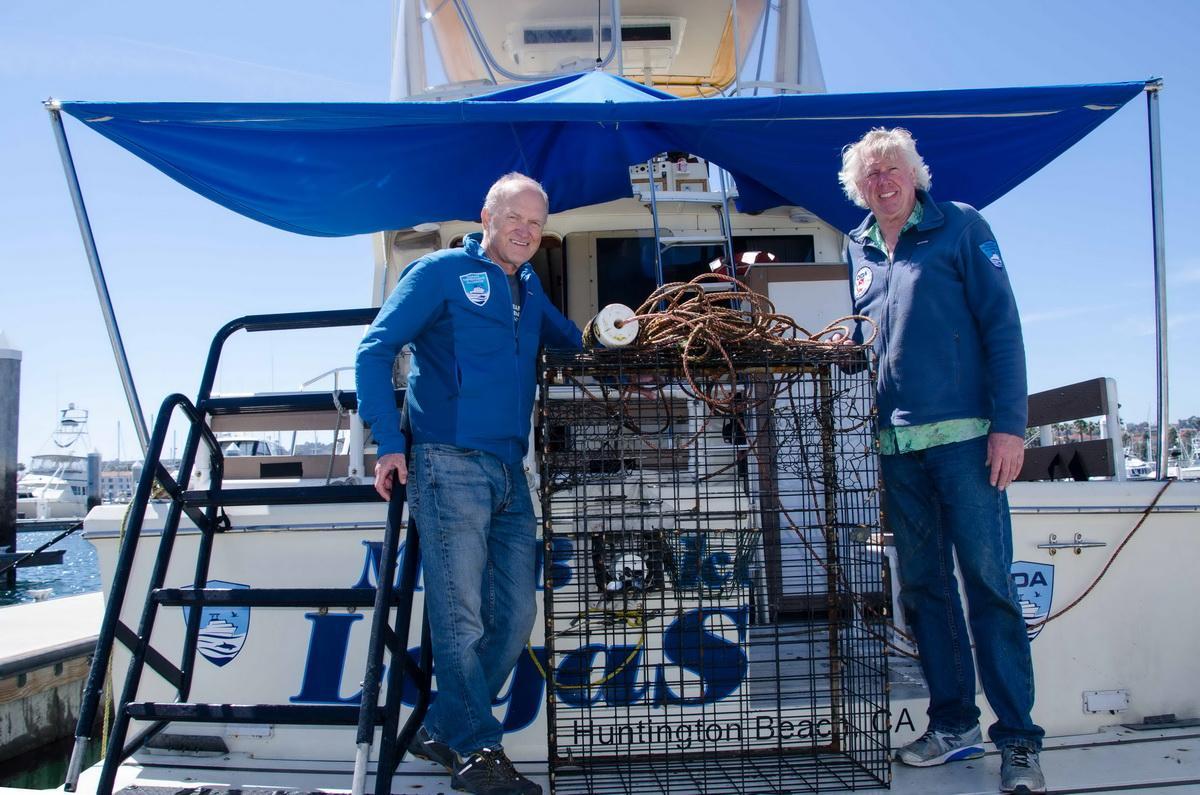 This one was set in about 220 feet of water and was right in the path where we see gray whales transiting on their way to either Alaska or Mexico. Nice to know that at least this errant trap will not impede their safe passage!

If you want to be part of the team who protects these whales from marine debris, please make a contribution to keep our boats at sea doing this important ocean defense work! Thank you!