Ocean Defenders Alliance (ODA) remains really busy cleaning up an area that lies just a couple hundred feet away from the LA Harbor breakwall – literally in our “backyard.”  Because earlier this year 4 gray whales became entangled in commercial fishing gear during a single 5-week period, I felt compelled to go out and do what we could to remove this ghost gear before any more of these majestic animals are forced to die a slow, painful death.

Based on a personal hunch and some video footage from helicopter flights that ODA volunteer Chris Aultman took me on over the years, we started diving in an area where we had seen hundreds of traps set during “lobster season.”  That is the time that the California Department of Fish and Game allows both commercial and recreational hunting of spiny lobsters (October thru March).

Our first set of dives there allowed us to remove several traps and over 1,000 feet of trap line.  These lines are made of polypropylene, and since the material is lighter than water, the lines float up from the traps in a long, slow arch—and into the water column.  That is how whales get entangled.

During their migration from Baja, Mexico to Alaska, the whales hug the coast because it is easier for their newborn babies as they swim the 7,000 miles to their summer feeding grounds.

Because of their close proximity to our coastline, the whales (and other species) have to navigate through a maze of ghost gear.

Since my last report in early May, I have spoken with several knowledgeable whale experts.  I learned that at least 8 whales have been entangled along their migration route: 4 right in ODA’s backyard, 3 in Baja, and 1 in Oregon.   There are, no doubt, more victims.  These whales typically sink after they die, which means we have no way to determine the exact death tolls.

On May 17th, we returned to the Lighthouse area and removed 4 traps and more than 300 feet of line.  We also found 4 sheep crabs in one of the traps and set them free.  A follow-up dive on May 31st – lead by dive coordinator Steve Millington – in the same area resulted in ODA’s removal of 3 more traps, lots of trap remnants, and over 400 feet of line.  One of the traps had 9 crabs in it that our awesome volunteer divers liberated.  Even though the crabs could move freely in and out of the enclosure, they are easy pickings for predators while in a trap.  By removing the hazardous traps, ODA returns the animals to their natural, rocky habitat, where they are less vulnerable.

We had Walter Marti and Linda Blanchard with us on the 17th.  They were shooting video and still images for us, respectively. On the 31st, Peter Fulks was shooting video for us.  These folks all got some GREAT footage for us.  Unfortunately, I am having problems with my video editing system and haven’t yet been able to create a video to show you.  Look for that video soon!

If you are interested in helping us out by donating dive equipment, we are in need of lift bags, wrist lanyards, cutting knives (West Marine), and emergency safety lights for our life vests. Please send your e-mail to .

We also need a serious upgrade to my computer and video editing systems.  If you are able to make a donation to help us get this system up to speed, it would be greatly appreciated.  All donations are tax deductible and go toward helping ODA achieve our goals.

Thanks for your continued interest and support—and please share this posting with your friends! 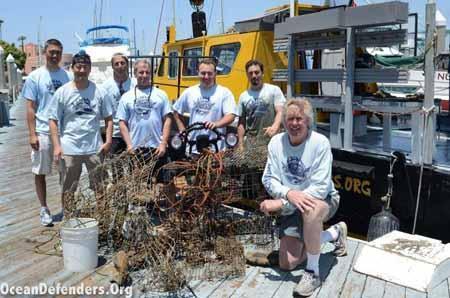 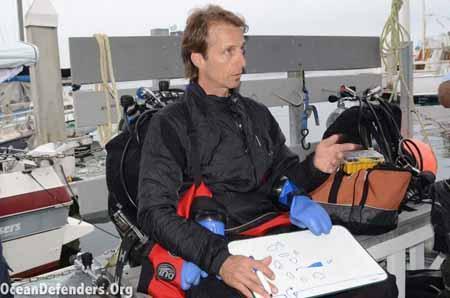 2012-05-31 Backyard Cleanup Campaign onboard the Clearwater. Volunteer Steve Millington charts out our dive plan and briefs our divers. 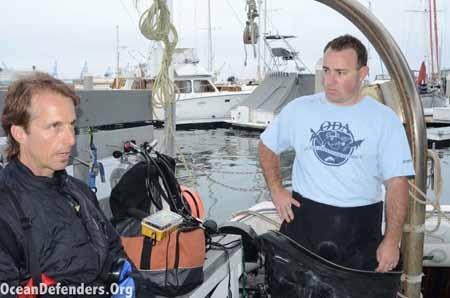 2012-05-31 Backyard Cleanup Campaign onboard the Clearwater. Two of our great volunteers, Steve Millington (dive coordinator) and Peter Fulk (videographer) discussing how best to film the trap and line removal process.