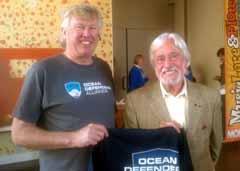 Jean-Michel Cousteau with Kurt LieberAfter waiting with baited breath for months, the BLUE Ocean Film Festival (BLUE) finally arrived! Every other year, the BLUE ocean film (and conservation!) event is held in Monterey, California, with people attending from all over the world. This is the premier event for underwater photographers, videographers, ocean defenders, scientists, and storytellers to come together under one big tent to show their latest films, discuss projects, create new connections and ideas, and share the highs and lows of the last two years.

This seven-day event (September 24-30) was attended by luminaries from all spectrums of the underwater world—all gathered to meet, greet, and bask in each other's company. Chuck Swift accompanied me for two days at this event; Chuck is a former Sea Shepherd, a trusted long-term personal friend and ally, is an active ODA supporter, and sits on ODA's Board of Advisors. It was great to have another strong voice advocating for ODA at BLUE! 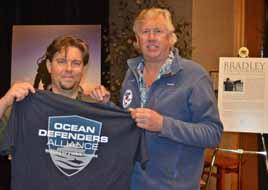 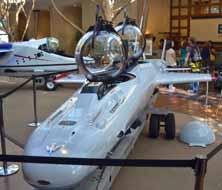 Our days were filled with screenings and break-out sessions—many directly focused on marine ocean conservation—in adjoining conference rooms. The sessions covered a wide array of topics, from the loss of plankton due to acidification, to the vital link between sea otters and a healthy kelp forest, to the role that Marine Protected Area's play in keeping marine habitats diverse enough to fight off invasive species and warming waters. 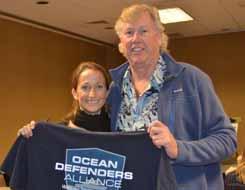 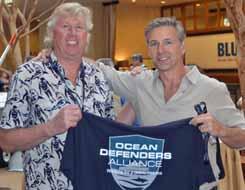 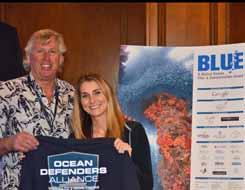 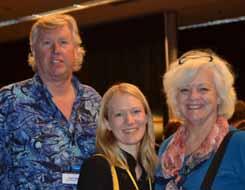 There were something like 500 people in attendance, and during the course of the week we got to talk with a LOT of them. Some of the highlights for me included talking at length with Sylvia Earle, Jean-Michel and Celine Cousteau, J. Nichols, David Guggenheim, and a lot of other talented people that bring magic to the screens...the producers and videographers that create all the wonderful documentaries we all love to watch from the safety and comfort of our sofas.

There wasn't much time to watch films, but I did manage to catch 4 or 5 of them. One of them, Otter 501, was featured on opening night in front of 400 people. It was about the rehabilitation process that sea otters go through when they are injured or separated from their mother, and one remarkable young lady's journey to do what she could to help in the rehab process. I highly recommend watching it: I was deeply affected and I'm sure you will be moved to action. [Note: ODA's actions help sustain healthy ecosystems and habitat-including the kelp forests of the California coast where sea otters used to thrive. Come volunteer with us, and help us bring back the sea otters!] 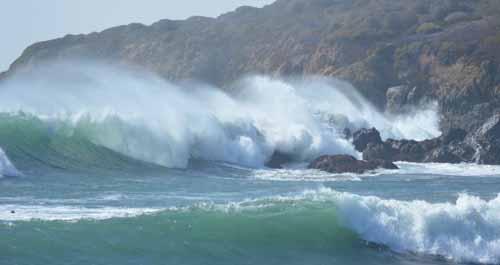 We made a lot of great contacts, and several of them committed to helping ODA get our message out. Too bad this is only put on every other year. Networking like this is a rare opportunity, and I thank all the great people that organize this event including people like Debbie and Sarah Sponagle (mother and daughter), but they are just the tip of the iceberg.

Prior to BLUE, ODA was invited to participate in a conference at the Monterey Bay Aquarium on September 21st. It was called the "Ocean Plastic Pollution Summit." They invited teachers from all over California to hear about how plastics are affecting the oceans, and how to motivate their students to help tackle the problem.

ODA had a booth there, and one of our new volunteers, Valerie Preston, helped me tell people about ODA and all the plastic we have removed. We had lots of valuable discussions with educators informing them of ODA's ongoing work to remove man-made debris from our oceans. Several teachers showed interest in having ODA talk to their classes and we are looking forward to doing it as a part of our regular education and outreach program.

On my way back home on Sunday, I took the long road on Pacific Coast Highway. What a spectacular scene played out before me through my car window: serene vistas of steep cliffs dropping straight down to the deep blue Pacific, acres and acres of kelp beds with dolphins, seals and otters all along the route. When I got to San Simeon I pulled off the road to enjoy the awesome sight of over 2,000 elephant seals hauled out on the beaches of several different coves. 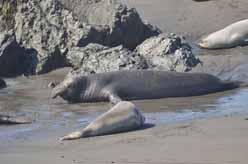 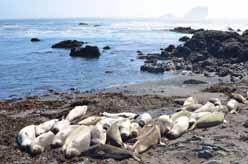 I spent several hours there at one cove where a couple of hundred people were thrilled to see the seals, but were in too much of a hurry to venture very far from their cars. I took a half-hour hike and had the relaxing company of 400 or so elephant seals to enjoy a glorious California day with. There were no other people in sight. Just me and the elephant seals...my kind of paradise or so I thought, until...

Peering through the lens of my camera and binoculars, I saw dozens of the seals with deep cuts around their necks, most likely from discarded debris they got accidentally caught in. It nearly brought me to tears, knowing that I could do nothing about what they had experienced. But it did make me more resolved than ever to get that toxic, tangling, deadly crap out of the ocean before any more animals have to suffer in silence.

Sleeping seals, 2 with rings around neck which are deep cuts, most likely from
discarded man-made debris they got caught in.

In the end, I realized that while many whales, seals, and other animals continue to become entangled in discarded fishing gear each year—the numbers would be dramatically higher if not for the work ODA has done over the last decade to prevent such tragedies. We ARE making a difference. We ARE saving lives. ...and we ARE going to continue defending ocean life through our growing alliance.

I offer my thanks to everyone that has taken action for the oceans and to all of you that support us financially. We have come a long way, but there remains much to do. 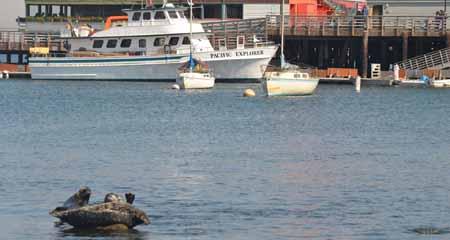