Be sure to look at the entire Photo Gallery after you read the article! You just have to see all the hard work of these dedicated volunteers!

If you’ve been following the weather news, you know that last week Hawai’i got hammered with heavy rains.  The storm first hit Maui, and then made its way to Oahu and Kauai.  It came down in buckets for a couple of days; so bad that some parts of Oahu had 13 inches fall in 8 hours! 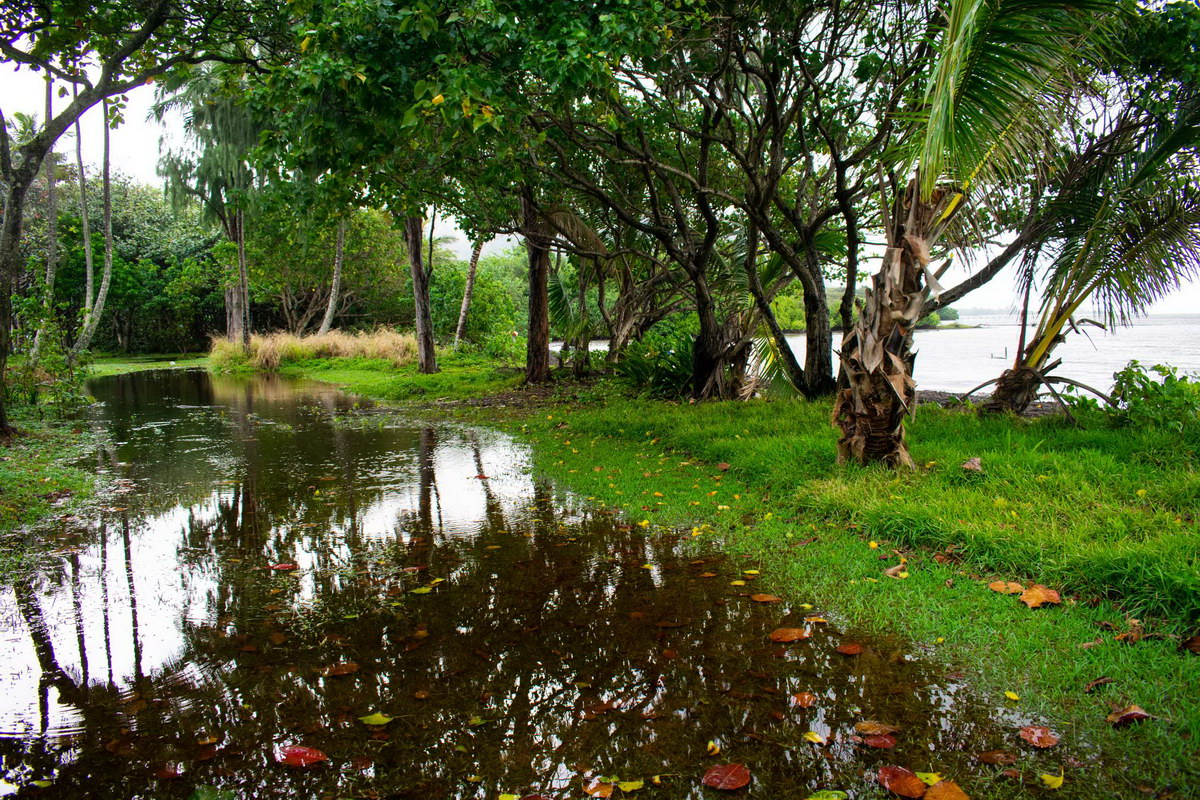 Outreach Coordinator Ken Staples and Oahu Dive Team Coordinator Glenn Roberts partnering with Ryan Scalf and Christy Johnson of Nudi Wear had scheduled a beach cleanup at Waiahole Beach for Saturday, March 13th.  This took weeks of planning as they had to get permission from several state agencies to allow a cleanup to happen in the first place, and then arrange with the city to have some trucks there the day of the event to haul all the debris away.

The show must go on…

As the day approached, the rains had subsided in intensity, but the forecast was still calling for rain in the morning.  Ken and Glenn decided to attempt the cleanup anyway because so much effort had gone into the planning.

When they got to the site, Waiahole Beach (on the east side of Oahu), it was raining, and they were hoping to get 6-8 people to show up.  They were pleasantly surprised to see loads of cars lining the street that lead to the park.  The 6-8 hopefuls turned into 27 people!  One as young as six months old (that’s Tammy Smith and Ed Sisino’s Lulu!), and several people from the Army (25th DIVARTY brigade).  Their strength and stamina would be put to the test… 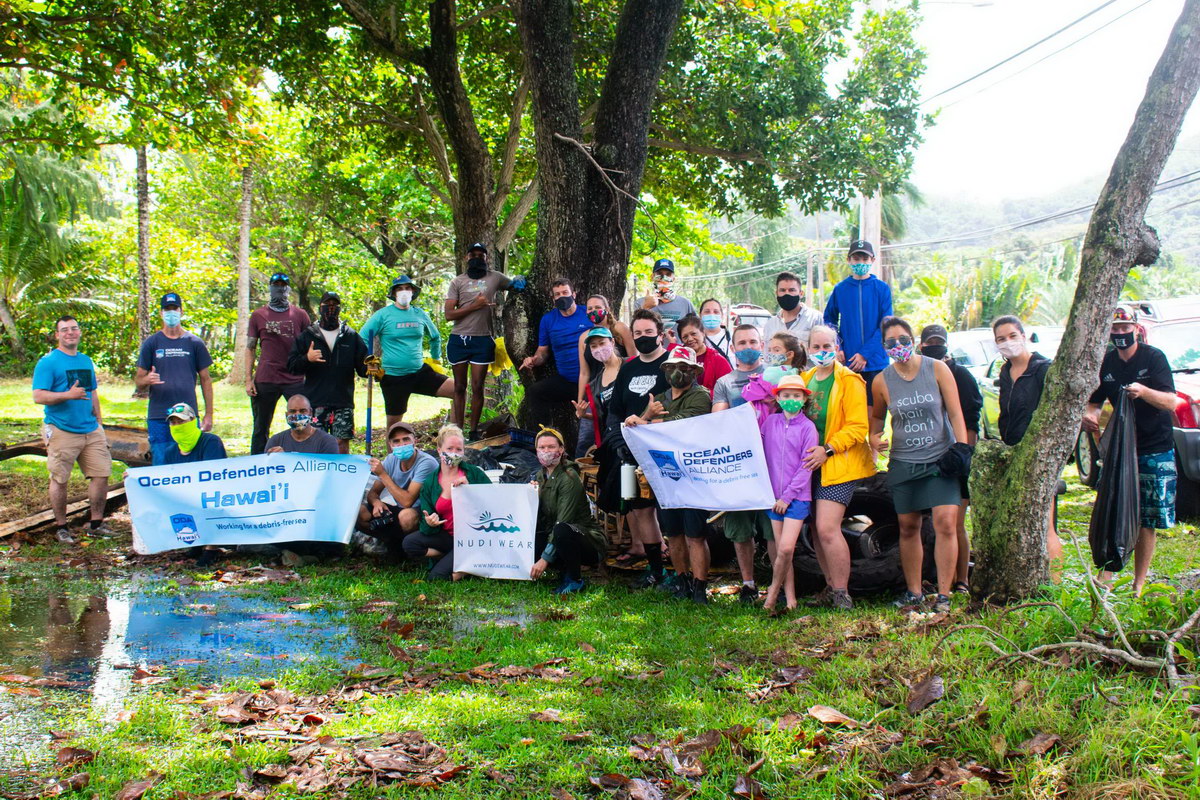 The rains had turned the “beach” into a swamp, with huge pools forming on what used to be grass areas.  As they greeted the earlier-arriving volunteers, just about everyone had come prepared for the mucky conditions.  Good thing, because what was once a sandy beach was now a mud bath with lots of organic material that had washed off the land as it headed to the sea.

ODA and Nudi Wear had come together to do a clean-up at Waiahole back in August of 2020. We scored over 3,000 pounds of debris that day! Knowing how much accumulates at this location, we knew we had to return.

Since this was our second time cleaning up this beach, we were able to brief the volunteers on the types of equipment needed.  Folks showed up with shovels, pick-axes, ropes, rubber boots, and rain gear.  There were several items that were just too big and heavy to remove on the last outing, so all those tools came in handy.

The beach crew found all the normal debris such as food wrappers, bottles, cans, utensils, and protective masks.  There were also several abandoned boat hulls and some rubber tires. 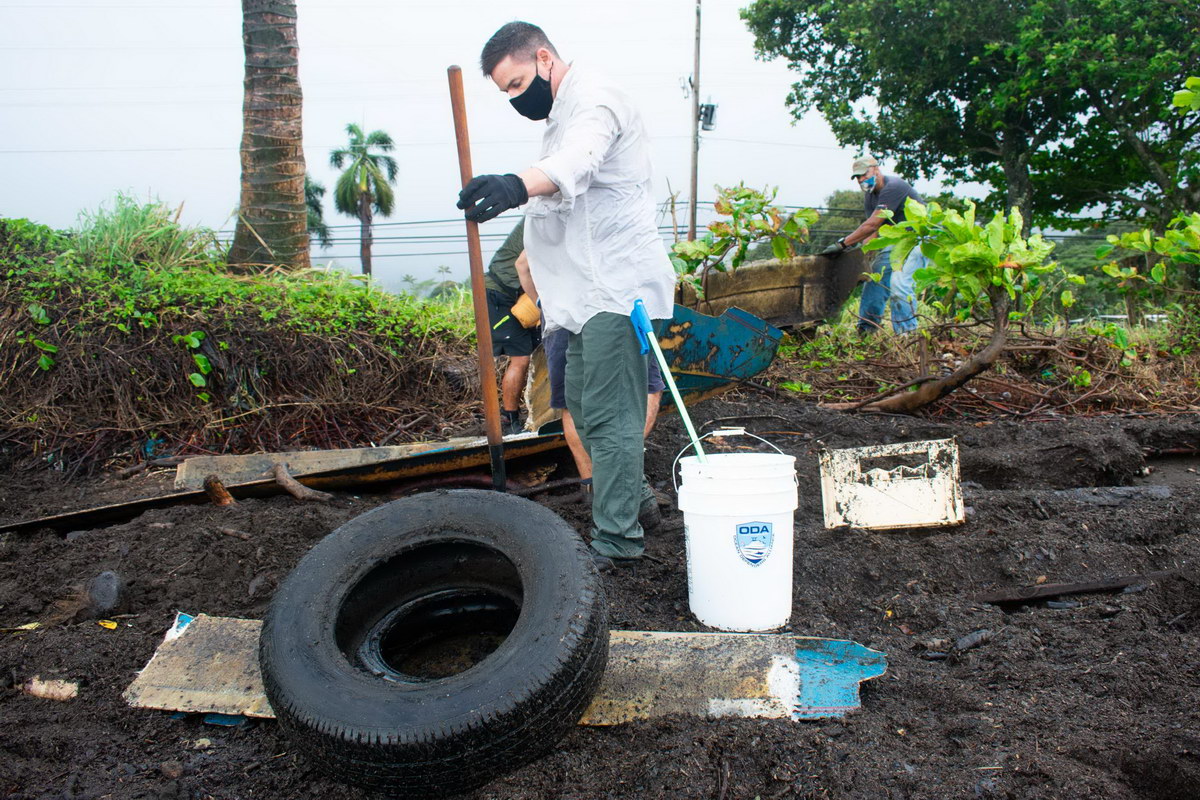 The waves had buried one huge clump of fishing net in the muck.  It took lots of digging, patience, and a few choice words not fit for family reading to get it unburied and then hauled off the beach to the side of the road.  The more they dug, the more net they found.

The net was so big and heavy that they had to cut it up into four sections.  Luckily, someone brought some large clippers which made that job easier. Note: It’s important to remove it so that tides don’t uncover it in the future and wash it back out into the waters to entangle and kill ocean wildlife. 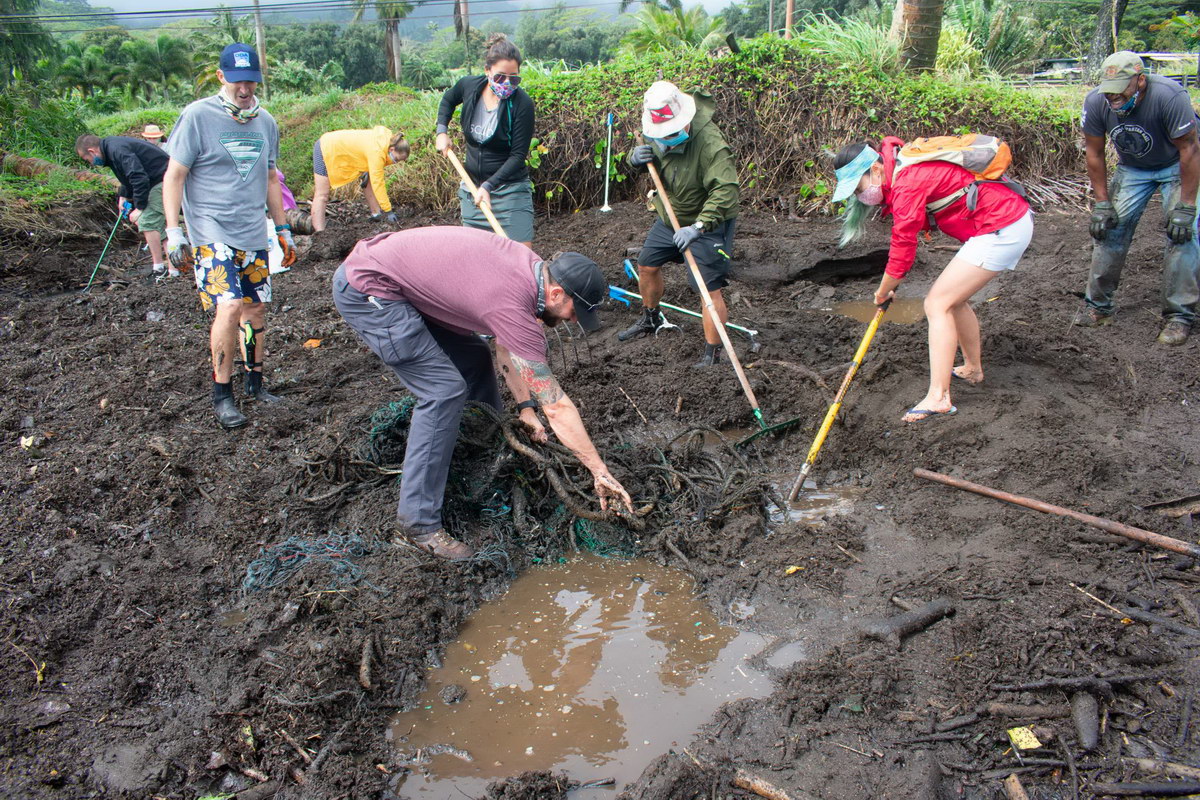 Lots of effort pays off

The crew started at 9am and finished around 1pm.  People came and went, as most got too tired to keep at it for that long.

A lady who lives right across the street from the beach came to see the happenings and was brought to tears seeing so many people clean up “her” beach!  Turns out she has been cleaning this place on her own for years, and she was just thrilled to see so much progress made. 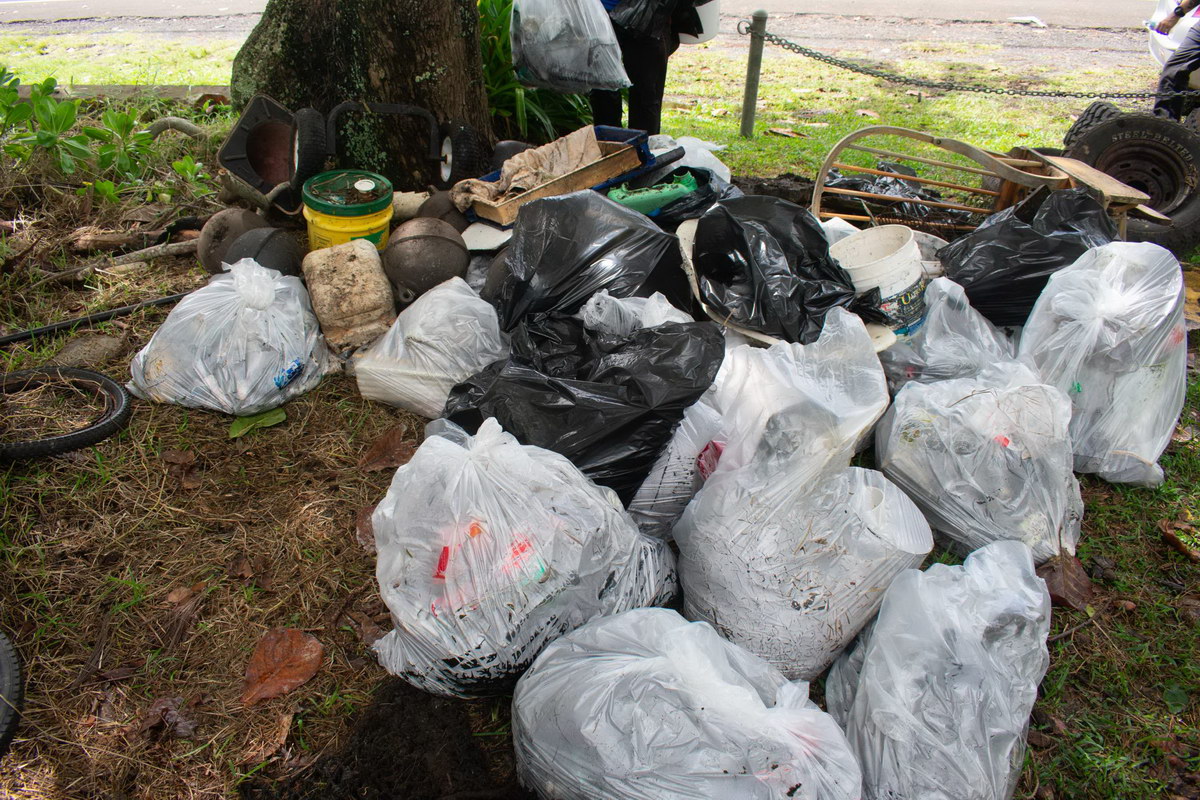 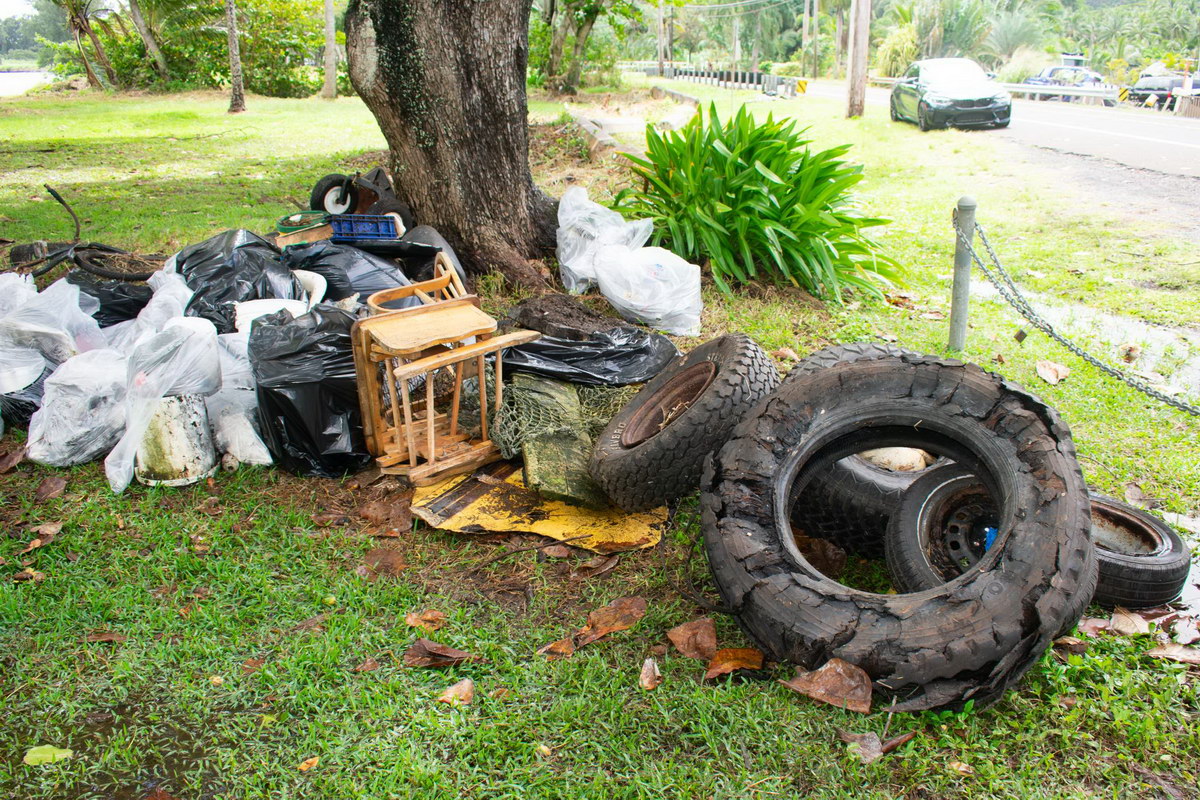 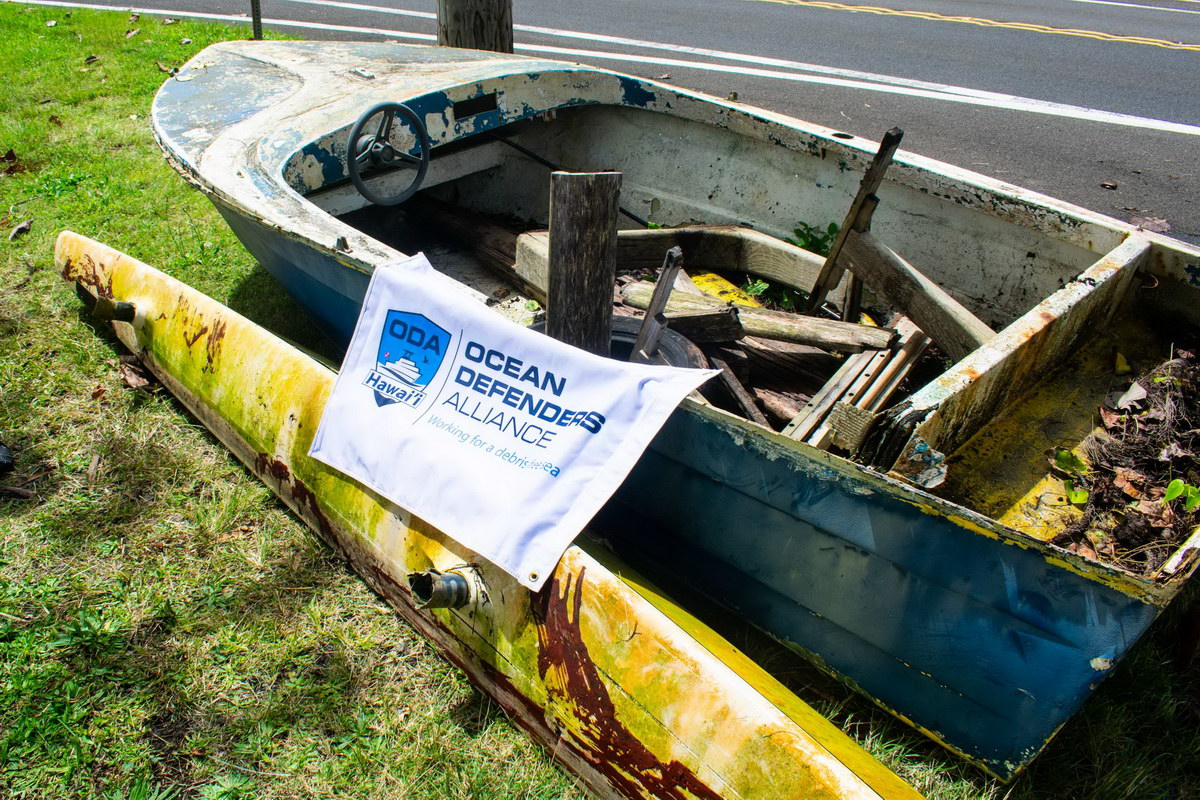 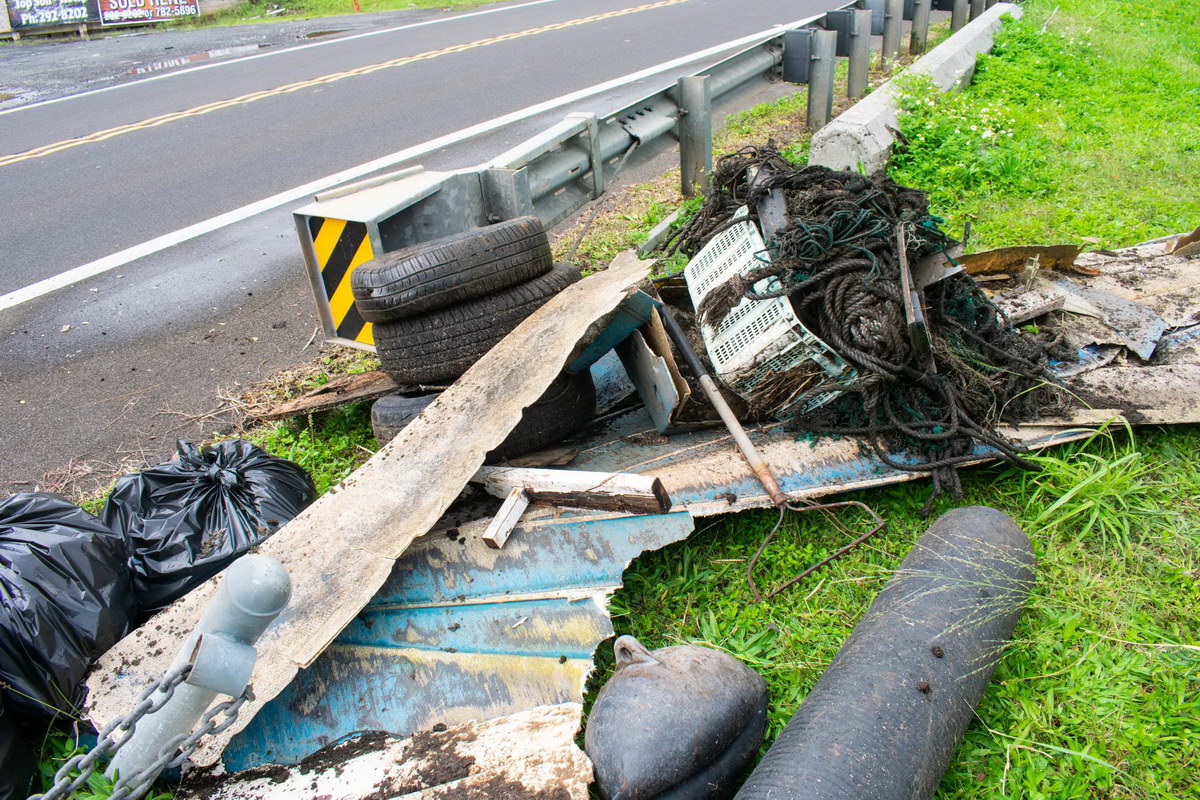 Ken had been coordinating with the city to send out a few garbage trucks to haul away all the debris, but that didn’t happen because all the trucks were too busy removing debris the rains had strewn all over the island.  However, thankfully, over the next couple of days they came back, and it’s all gone now.

If you want to have fun with a group of like-minded ocean defenders, be sure to shoot us an email. 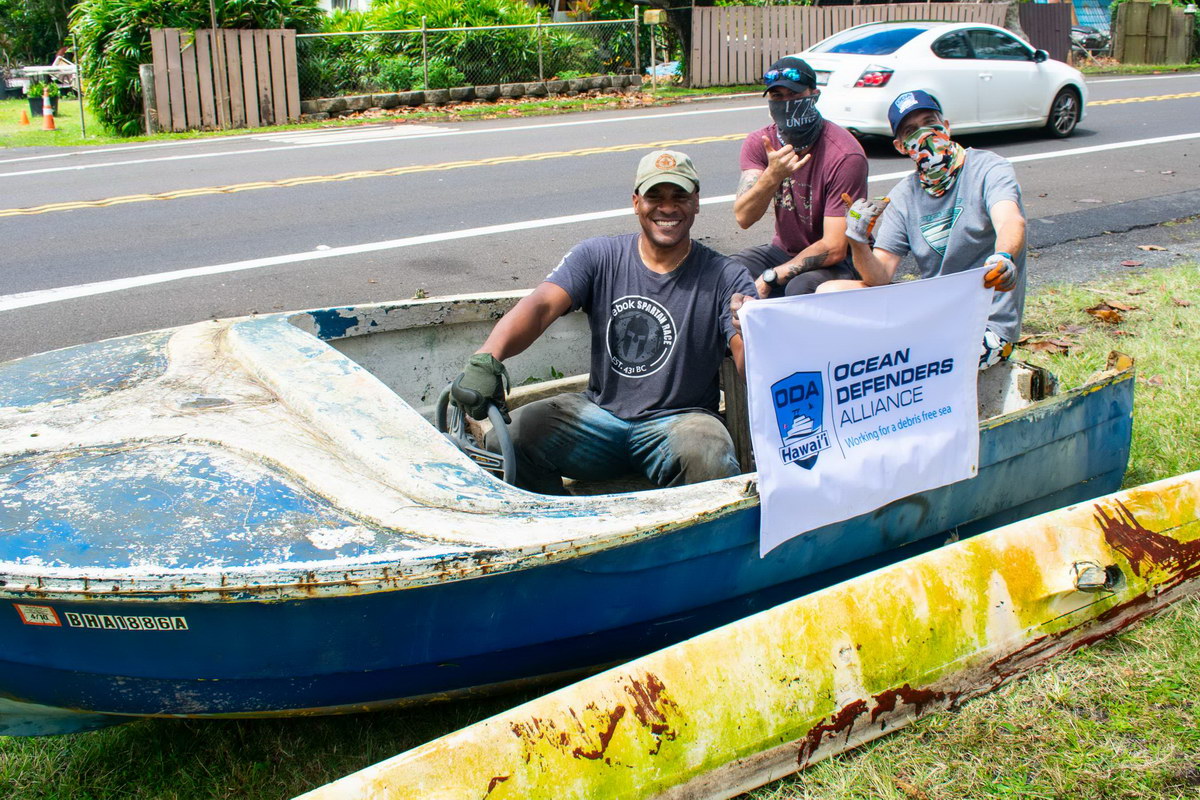 What a team effort!  Thanks to Ken and Glenn & Ryan Scalf and Christy Johnson of Nudi Wear for alll the work coordinating.  Thanks to Cindy Staples for taking all these photographs.  And thank you to Ed Sisino for using all your expertise to get the boats and tires tied up, drug out, and secured along the roadside.  Lulu, we thank you for your sweet smile that brightened our cloudy day!

In all, the team removed 3,600 pounds of stuff.  Now, that is what I’d call a heavy lift!  The weight of it was made all the more difficult by the conditions, but many hands helped to lighten the load. Thanks to all of you ocean defenders!