Honokohau Harbor and Two Other Sites Get ODA-HI’s Attention

That seems to be the lesson of the day.

I went out with a crew from Jack’s Diving Locker to look for more marine debris to remove on Monday, July 23rd.  This time we motored out of Honokohau Harbor, which is just a few miles north of Kona.

ODA has been partnering with Jack’s for the last eight months.  We took their newly-painted boat, the Diver Two and headed north from the harbor about six miles to a spot that is frequented by manta rays.  And wouldn’t you know it, we passed right by one lounging at the surface on our way there. Sorry to say, I didn’t even have my camera out and ready at this point, but I did get a few shots of dolphins later, so I’ll share them here! ;-) 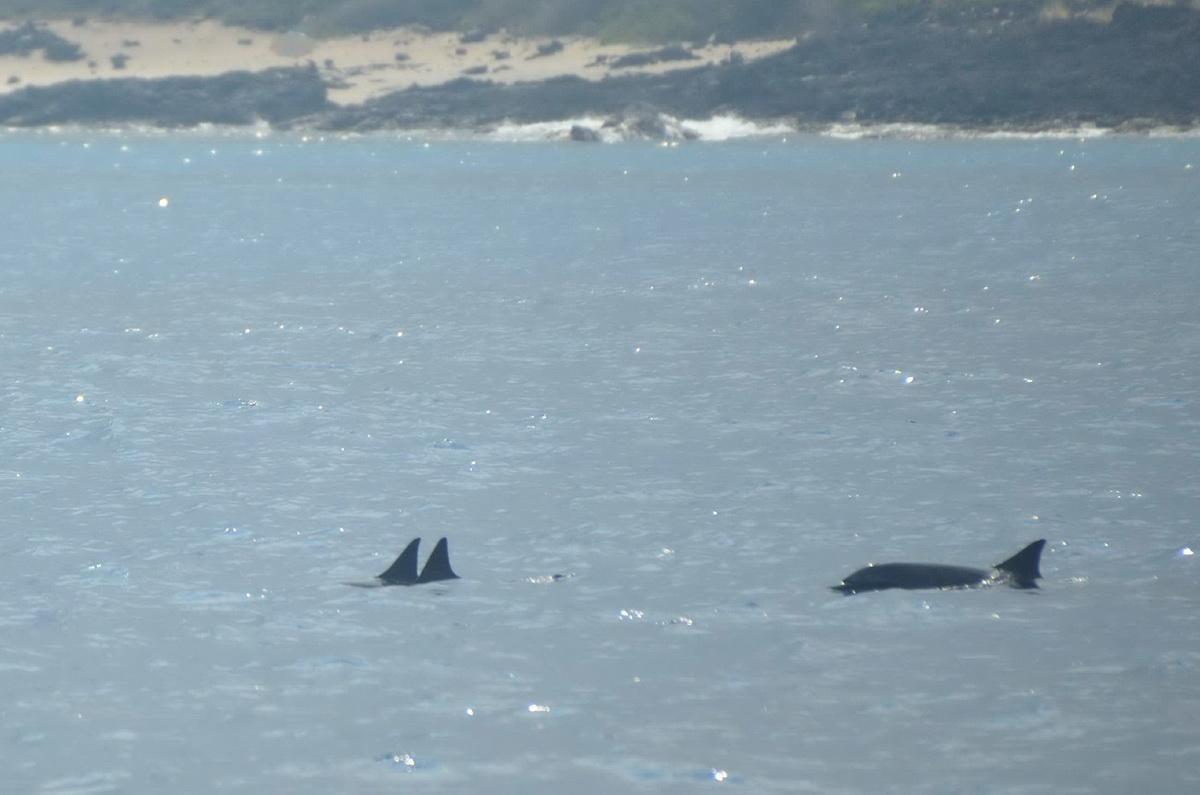 Our boat captain was Matt Bogdanovitch.  The dive team consisted of: Sheila Blum, Jeremy Bricco, Megan Murray, and Anthony Roggero.  Each one works at Jack’s, and are very experienced divers, which turned out to be extremely helpful.

Not the Kind of “Fad” You Normally Hear About

Several months ago, Captain Matt had taken note of a location where they had spotted a FAD (Fish Aggregating Device).  FADs are used by fishermen to attract marine wildlife to the area and then catch all the fish they can that congregate in the shade beneath the device.  The fish gather there because the shade gives the critters a chance to rest and cool down from the equatorial sun.

Captain Matt said he observed that the FAD had become snagged on a reef, and we wanted to cut it loose and remove it.  There are many kinds of FADs, but here’s an image just to give you the idea. 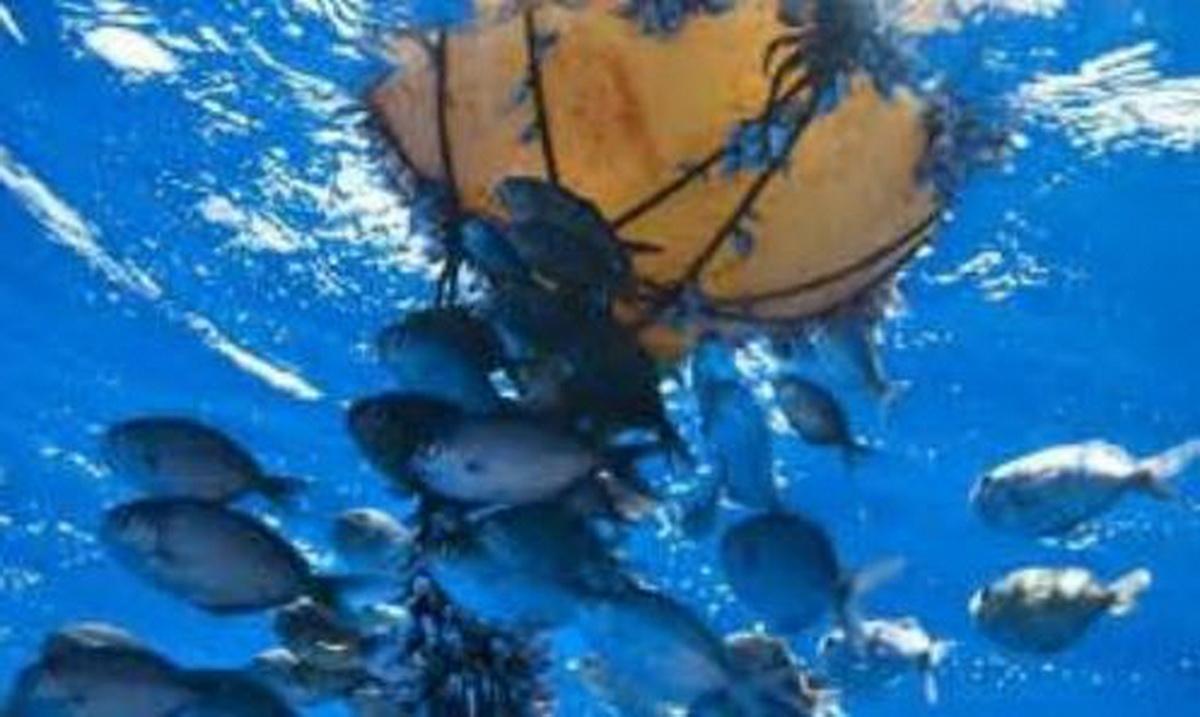 When we arrived at the site, we didn’t see anything at the surface, so Jeremy put on his gear and went down to see if he could locate it.  He came up 10 minutes later and said there was no trace of it…

So, we then headed to a place called Golden Arches, where Matt had seen a net lying on a coral reef.  This time Matt jumped in to see if he could locate it.  He found it within a few minutes and attached a surface marker buoy to it so the dive team could find it quickly.

Then Sheila, Jeremy, Megan, and Anthony headed down to 95 feet where they saw the net. 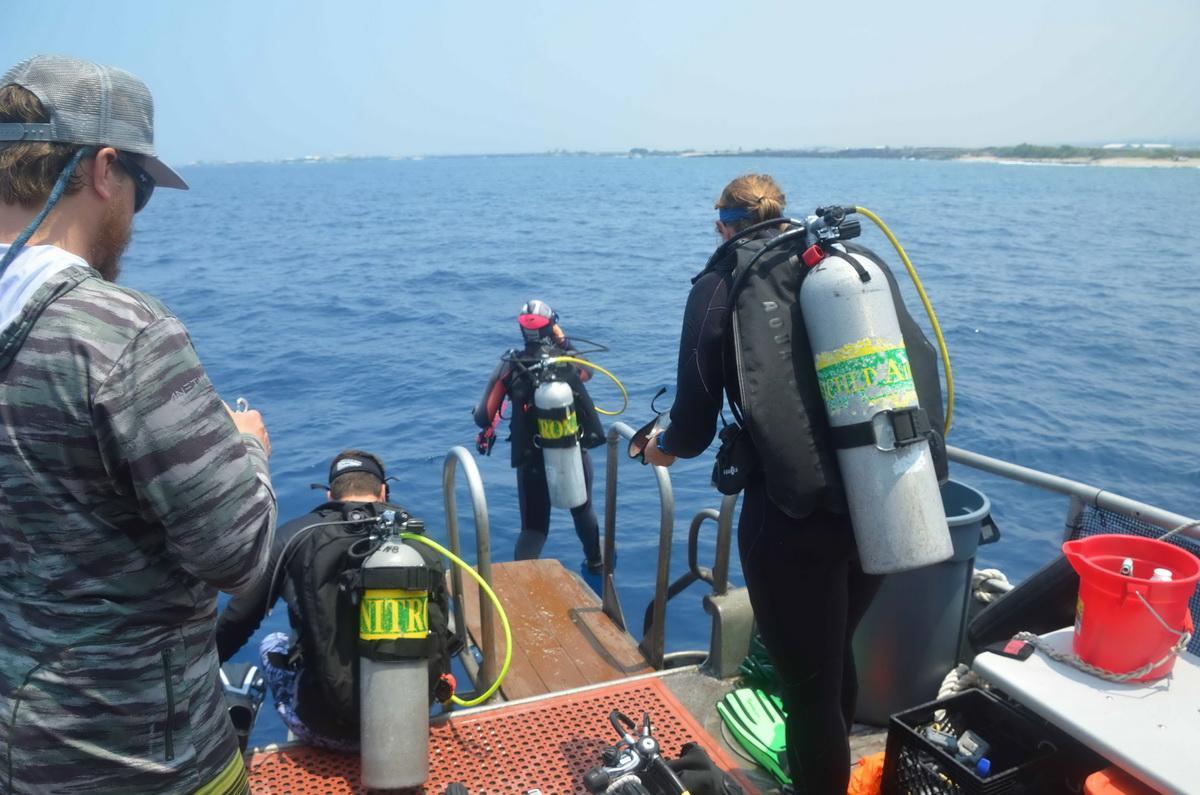 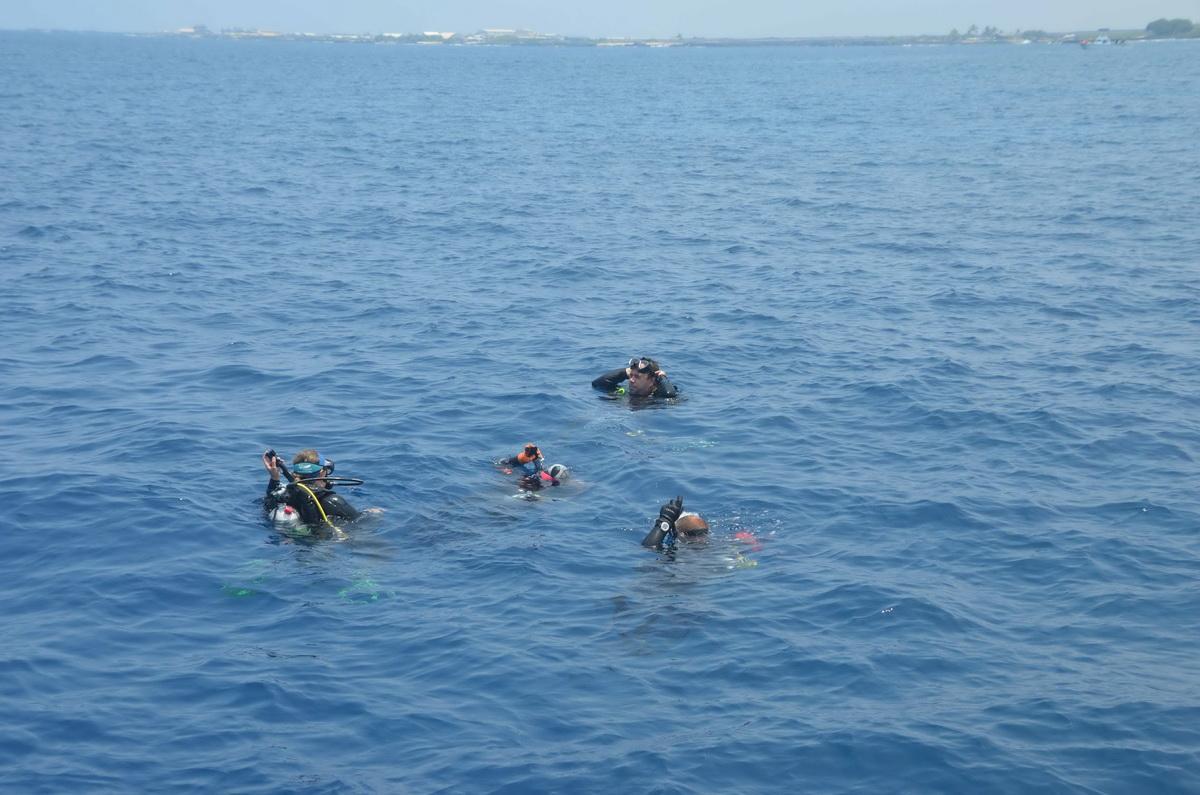 They did a quick survey to see where it went, only to find that it was stretched out a long distance.  In fact, it went from 95 feet down to 145 feet.  Oh boy, a much bigger net than we had anticipated. 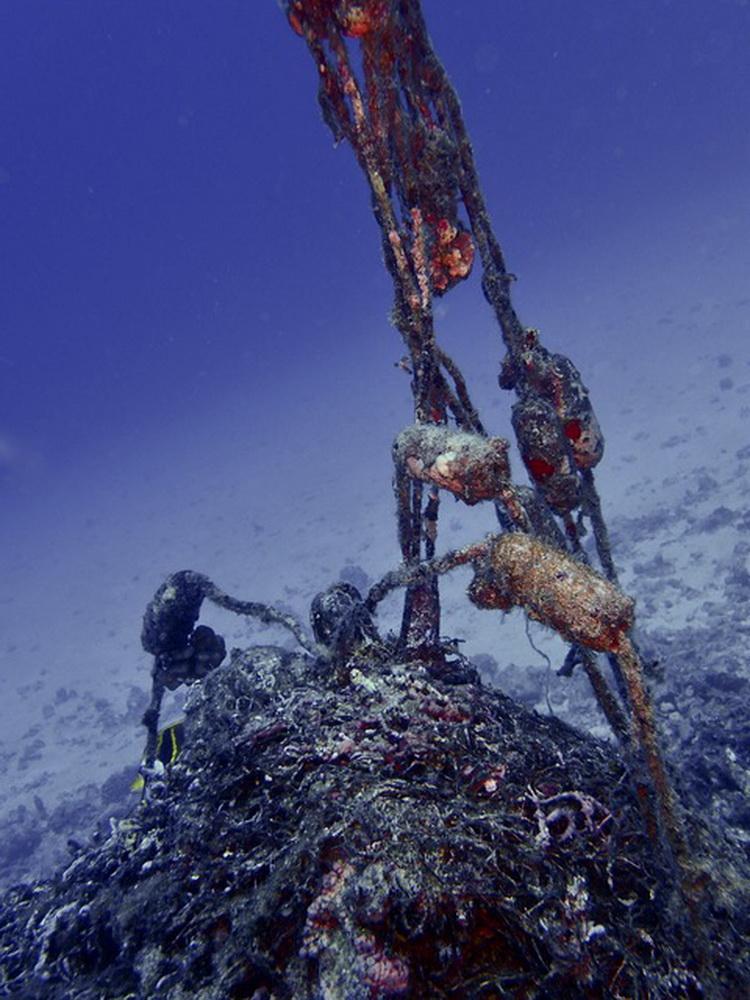 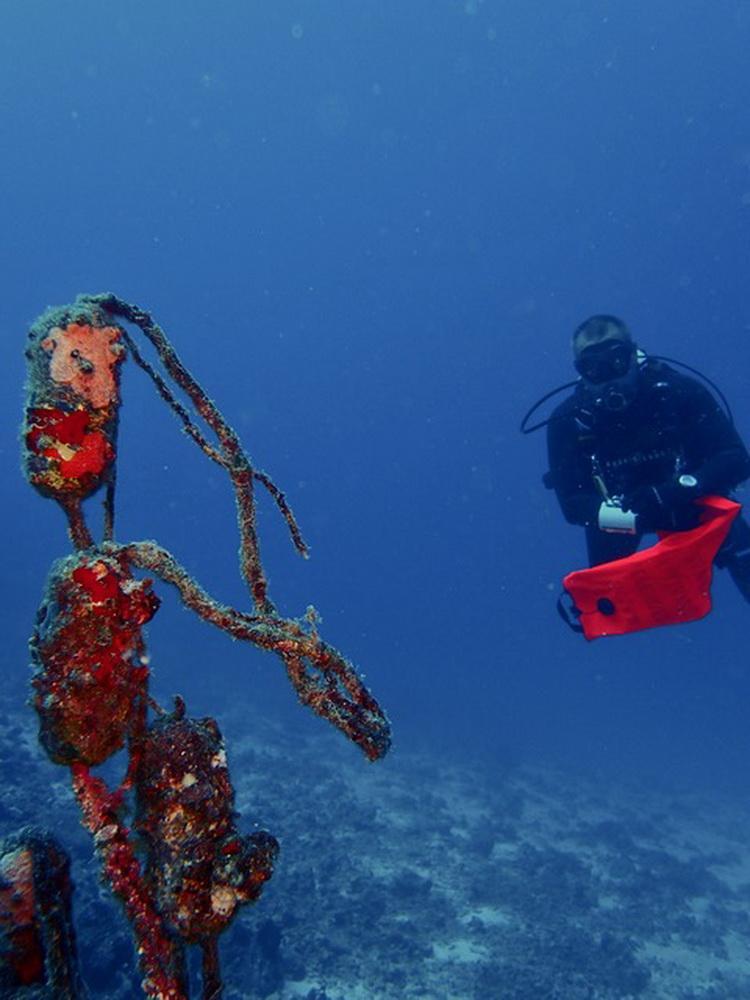 This net has been down there for several years and has become entangled with the corals.  The team attached a lift bag to the shallow end of the net, put some air in it, and the bag promptly broke away from the net and rocketed to the surface.  Matt and I were excited to see the bag come up, only to realize that nothing was attached to it…

The divers surfaced a few minutes later and informed us of what had happened.  Turns out the net was deeper that we thought it would be, and so we’ll be going back with a plan to utilize divers who are either technical divers or use rebreather systems.  They can stay down longer than using regular gear, and have more experience working at those depths.

Work to Do Back at Honokohau Harbor

We headed back to the harbor and enacted our second cleanup plan: Look right under the boat slip in the harbor and see if there was anything down there to remove.

The dive team still had energy and were ready to go, which is saying something because the UW vis (underwater visibility) had been close to 70 feet on the first two dives, and now we were looking at 10 feet of vis in the harbor.  Not to worry, they said!

Into the harbor waters went Sheila, Jeremy, Megan, and Anthony.  Matt and I stayed on the dock and dropped them some lines to attach to whatever they found. If they found debris, they would attach the line to it and give it a firm tug, so we’d know to hoist it up.  And oh boy, did they find a lot. 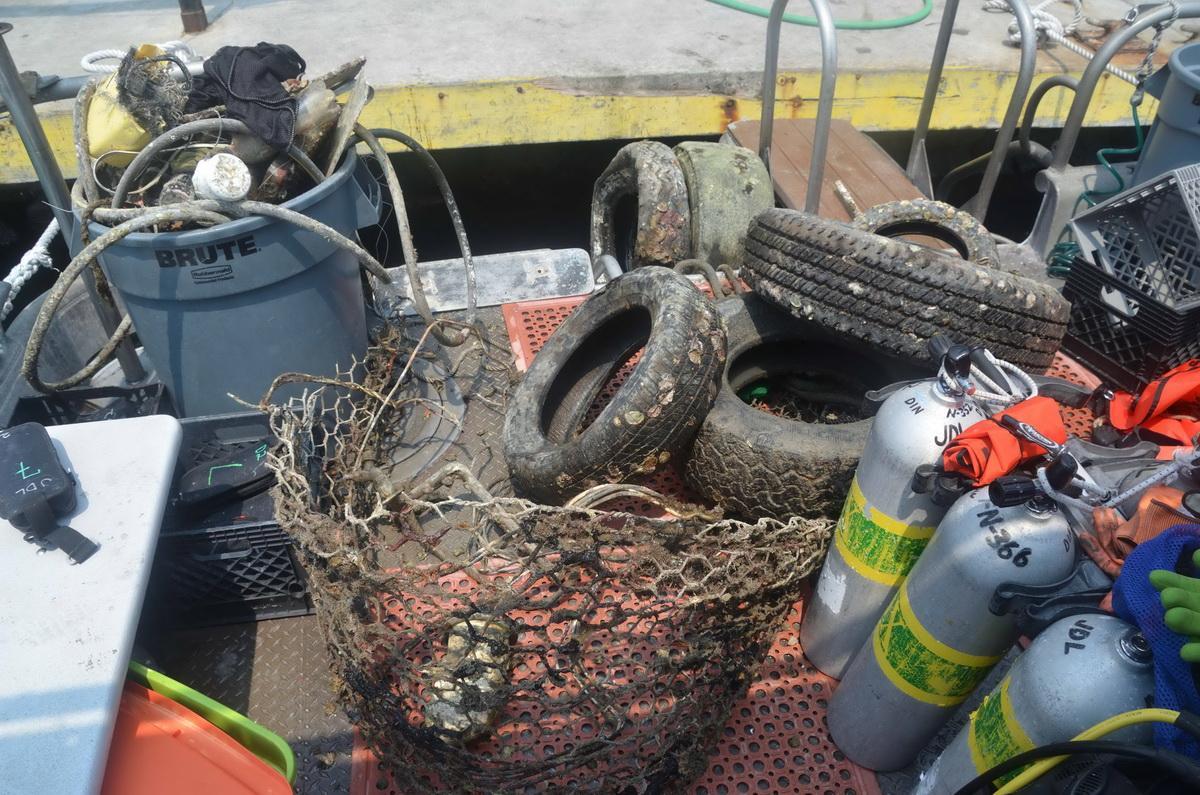 They didn’t move more than 40 feet and were keeping Matt and I busy pulling it up and onto the deck.  We could have removed a lot more, but our first goal was to evaluate the situation and obtain proof that the harbor could use a good cleaning. 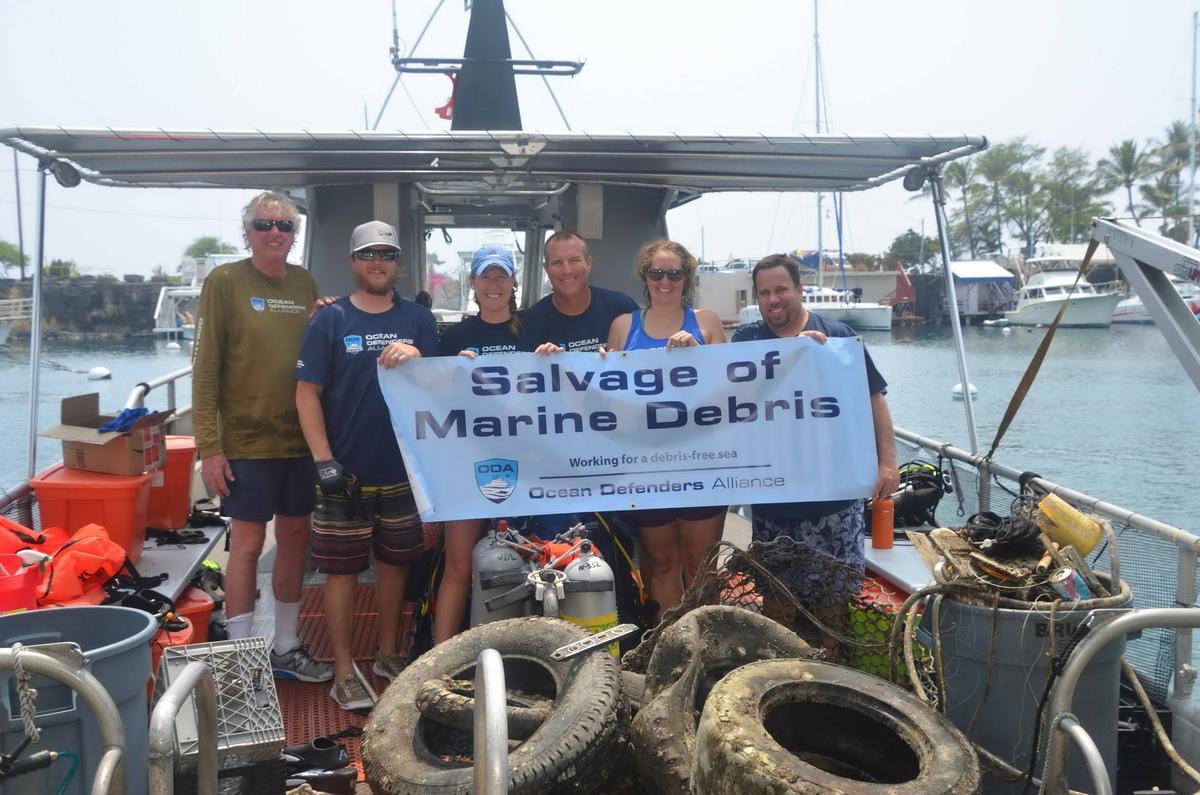 While the harbor might not seem to be the kind of place to find pretty wildlife, Jeremy and Sheila came across this stunning nudibranch while sorting through the muck for debris.  This is called a Gloomy Nudi, at least in Hawaiian.  Who would want this critter living amongst all the hoses, tubes, tires, and nets? 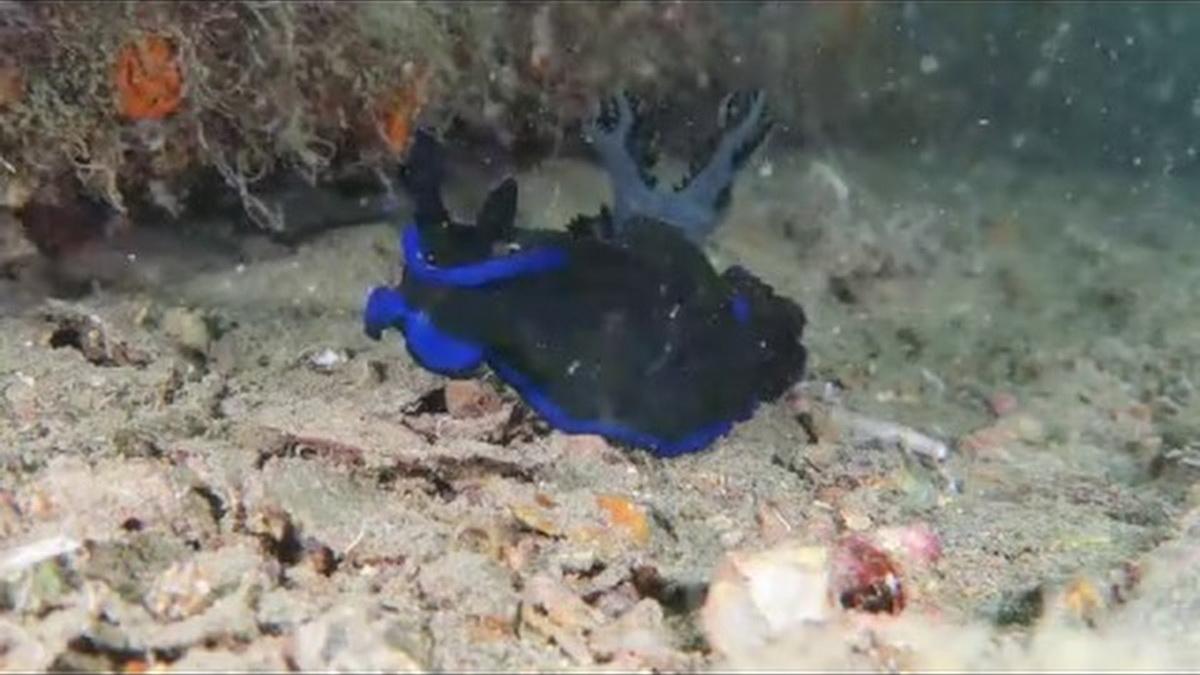 If you’re not familiar with benthic life (marine life that lives on or in the ocean floor), I thought I’d take a moment to share the definition of “nudibranch” per Wikipedia: “Nudibranchs are a group of soft-bodied, marine gastropod molluscs which shed their shells after their larval stage. They are noted for their often extraordinary colours and striking forms, and they have been given colourful nicknames to match, such as "clown", "marigold", "splendid", "dancer" and "dragon". Currently, about 3,000 valid species of nudibranchs are known.”

Here's one our ODA SCUBA team saw in March of 2013; it’s called a Lemon Nudibranch. 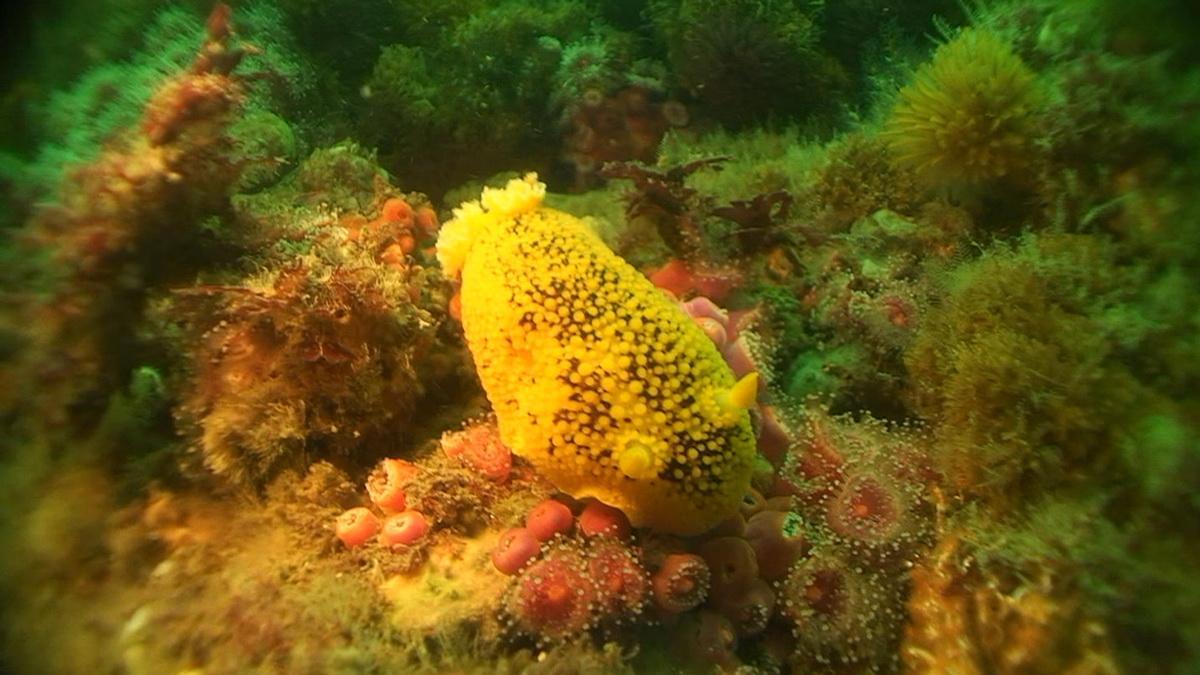 More Ocean Waters and Ocean Life to Be Defended

The next day I went in to the office of the Harbor Master and had a great conversation with the agents there about ODA applying for a permit that would allow us to get volunteer divers in the harbor waters on a regular basis to do what we can to remove all the debris.  The staff were very helpful and supportive of our offer.  I walked away with some paperwork to fill out, which I did, and now we are awaiting the final approval.

Please email us at to let us know that you want to be part of this cleanup effort – either as a topside helper or a SCUBA diver. Then keep an eye out for notifications announcing the dates for future cleanups and get your gear ready to help our friends in the oceans.  This will be an opportunity for divers and non-divers alike.  We’ll need fins in the water and hands on the docks!

A big Mahalo to Captain Matt and all the divers who made this a day to remember!