Having just gotten back from my trip to Hawai’i to work with our partners there, I was anxious to get our Southern California crew together and get back in the coastal waters.

So, on May 6th, we had a small crew gear up and head to a site that we have been visiting for years now: the entrance Huntington Harbor. 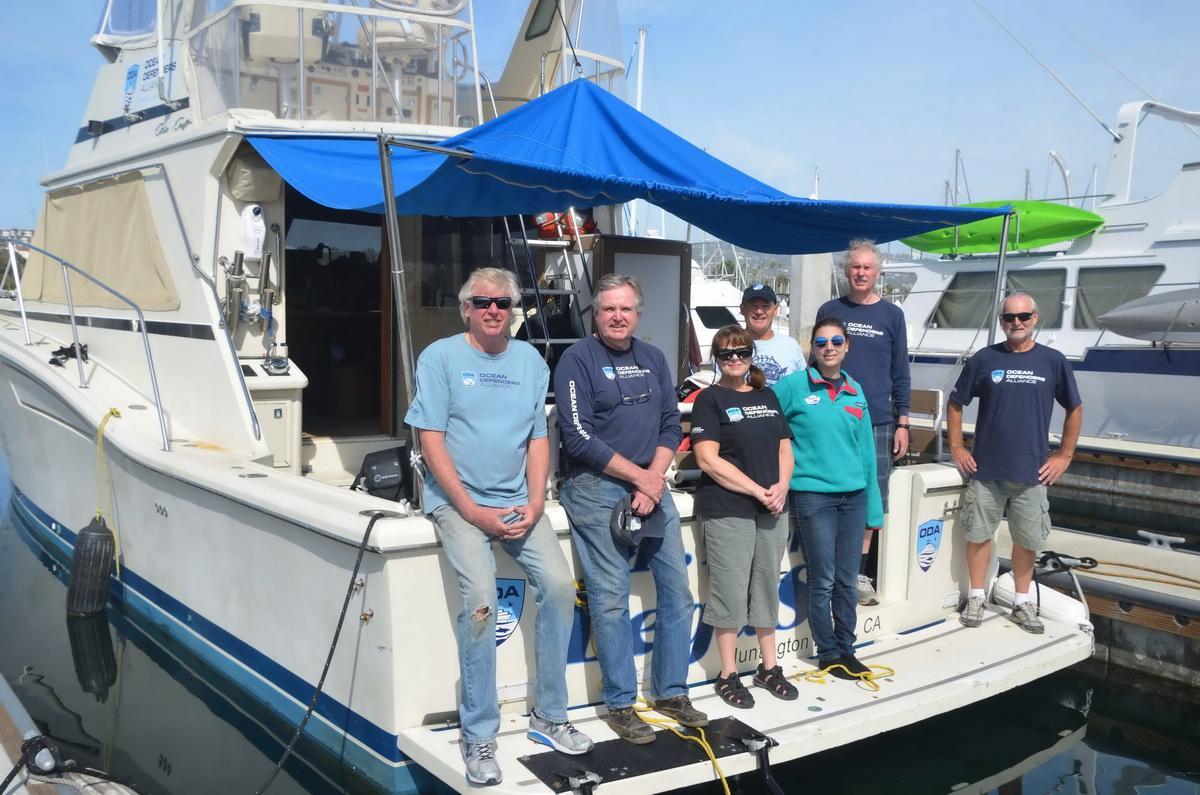 The weather was pretty ominous as we motored from San Pedro.  Seas weren’t too bad (2-3 feet), but the winds were strong and the clouds kept the sun at bay all day.  It wasn’t enough to deter us from our goal to get some abandoned traps out of harm’s way.

The divers this time out were: Al Laubenstein, Dennis Berube, and myself.  Rex Levi took over as captain, with Lisa Davis, Brooke LaDouceur and Jim Lieber onboard to handle the deck duties. 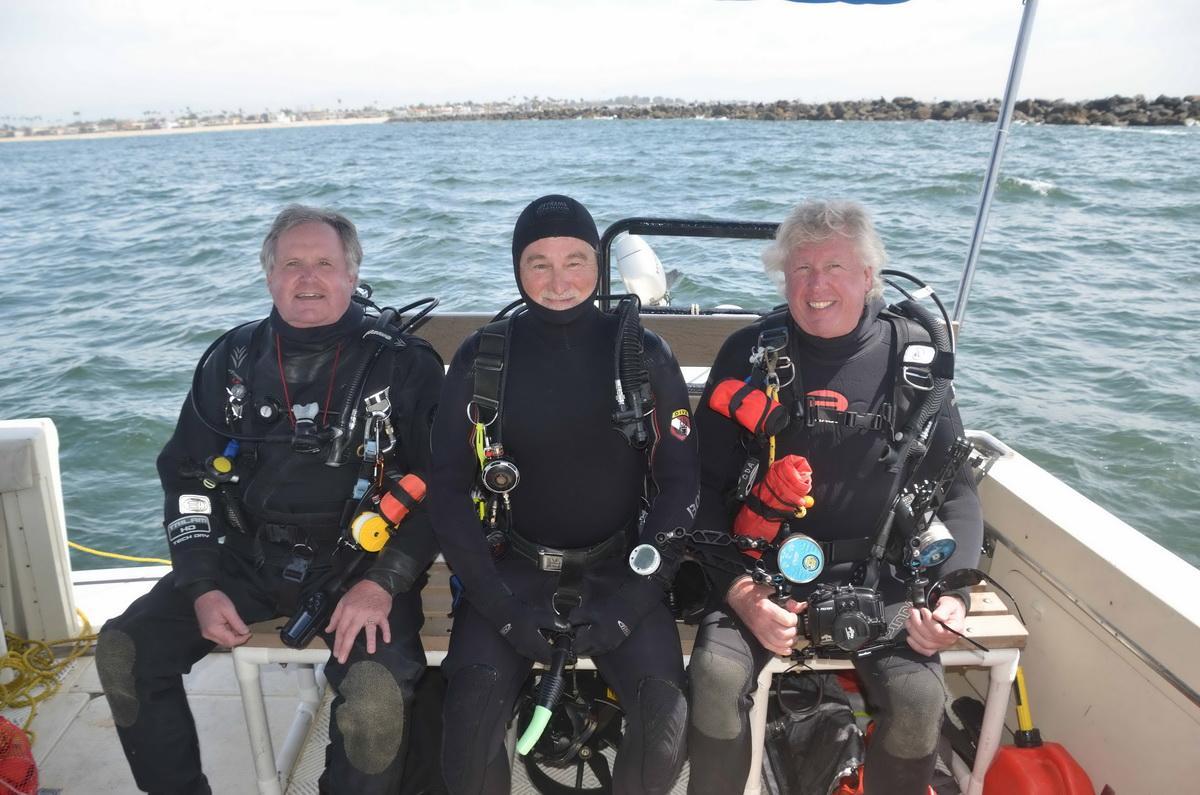 When we arrived, we dropped anchor about 200 feet from the breakwall.  We could tell just by looking at the water that underwater visability (UW vis) was going to be pretty bad.  So Al, Dennis, and I made sure we had a plan in case we got separated.

We had our UW scooters, so we knew getting around wasn’t going to be a problem.  But when you are moving around in these kinds of conditions all it takes is for you to look away for a couple of seconds and you’re now on your own…

Visibility at the surface was even worse than we thought it would be. We could barely see five feet.  But as we dropped down to 25 feet the vis got “better,” to maybe 7 feet.  Yikes, like swimming in pea soup!

Ghost gear is not invisible to us ;)

Al led the way and within a few minutes we were finding things.  We located one trap, which Al and Dennis attached two lift bags to and sent it to the surface. 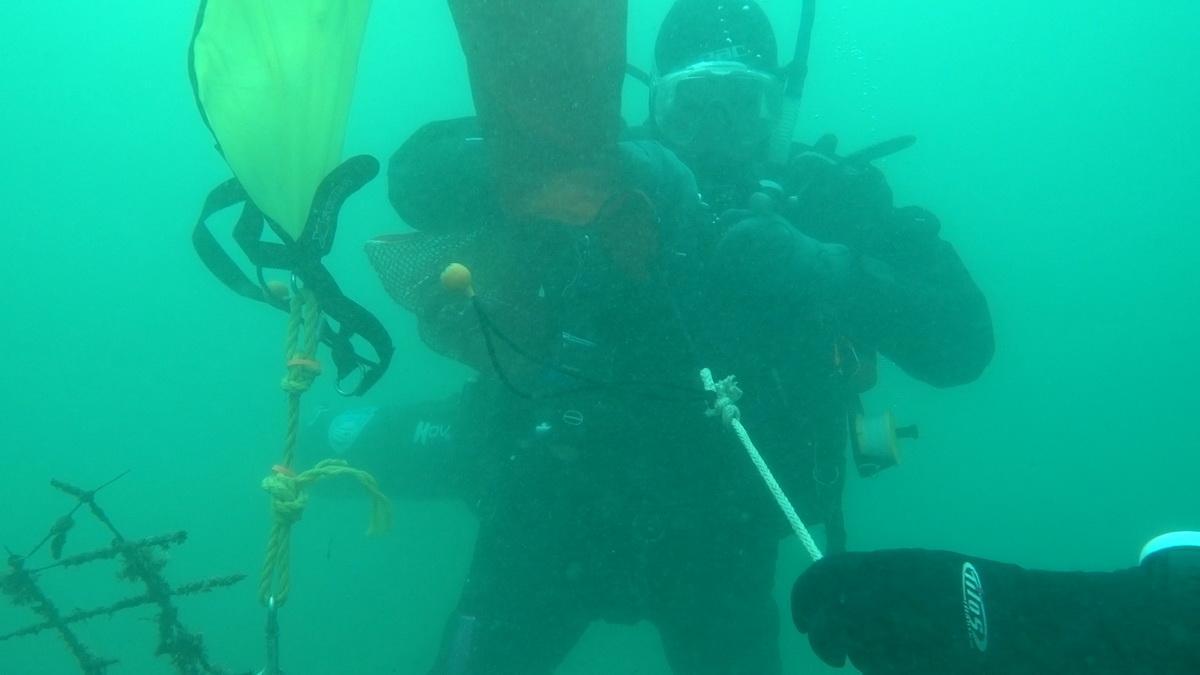 We continued on our way and found another trap.  But this one was really buried in the sand.  Two of us yanked on it and it felt like it was encased in cement.  Had to leave that one behind, unfortunately.  As we moved along we found several pieces of lobster traps that had broken apart, and so we attached them to more lift bags and sent them up as well. 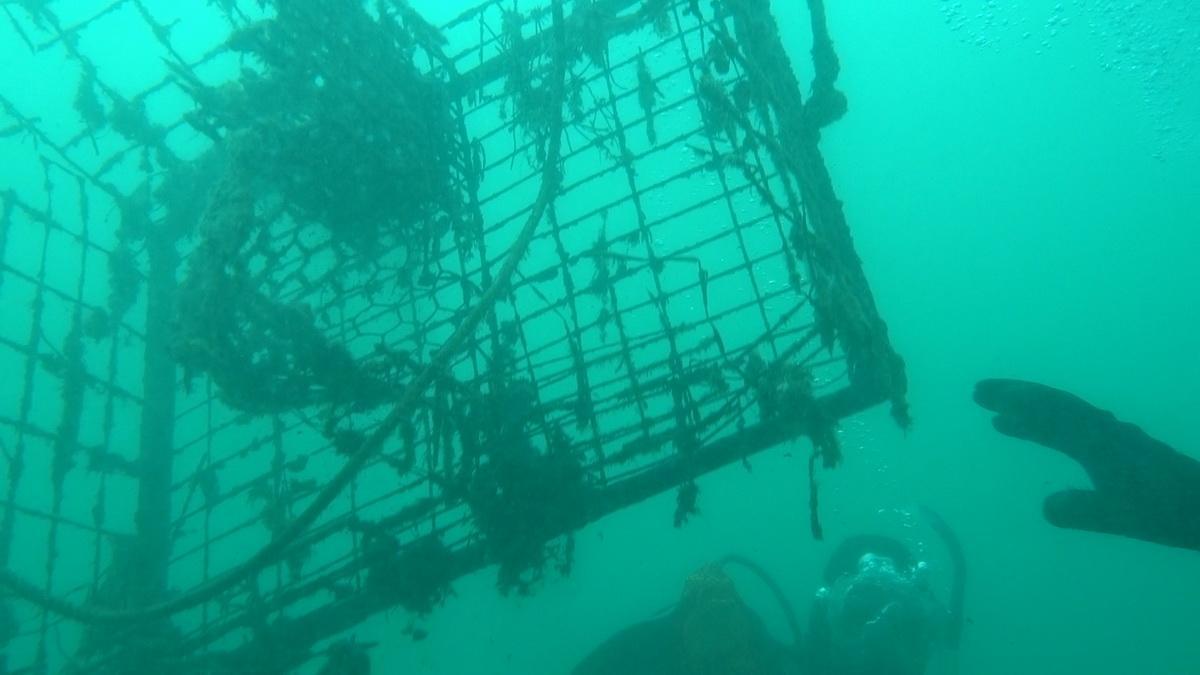 By this time the UW vis was really getting bad, so we decided to head back to the boat.  Al did an outstanding job of navigating us to within 50 feet of the boat.  Sweet!

But now the seas had really picked up; to the point that it was difficult to get to the swim step.  We eventually made it and climbed back aboard. Whew!

In the meantime, Jim and Brooke had retrieved the lift bags using the RIB (rigid inflatable boat). 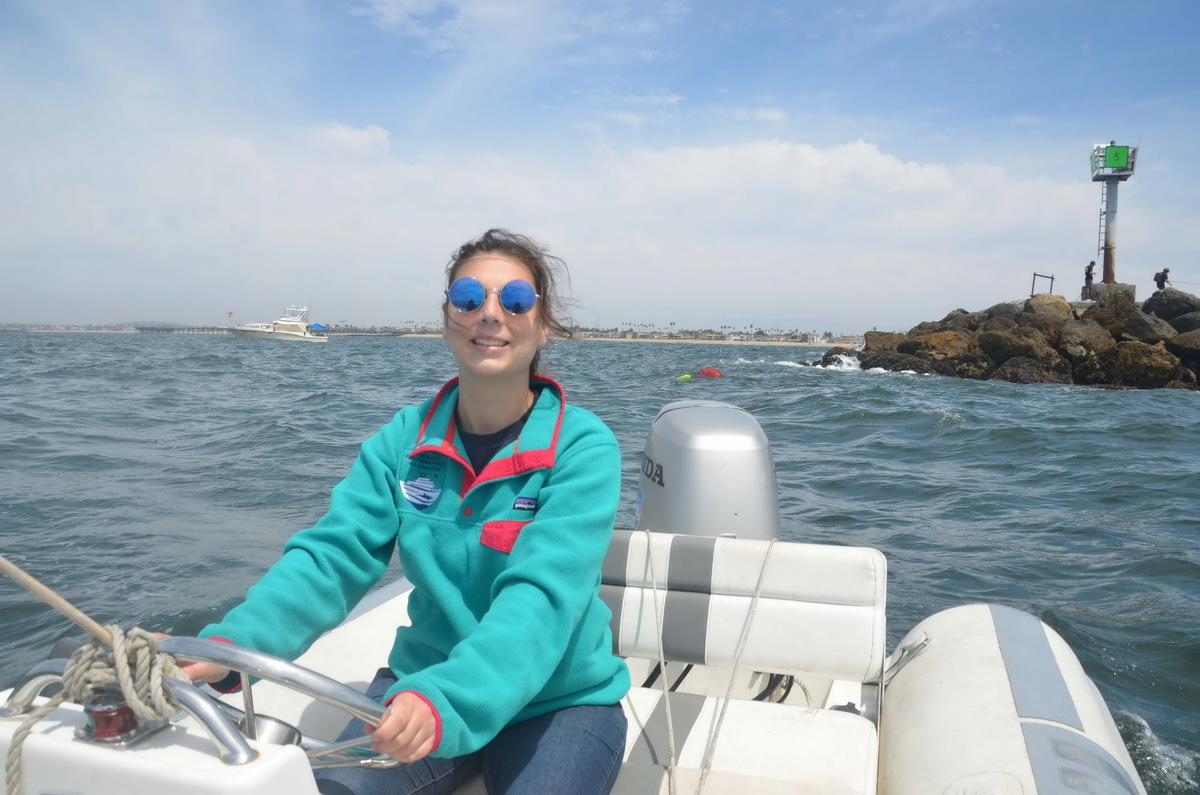 Now the fun began, trying to wrestle the trap and remnants onto the boat, which was really pitching because of the rough seas. 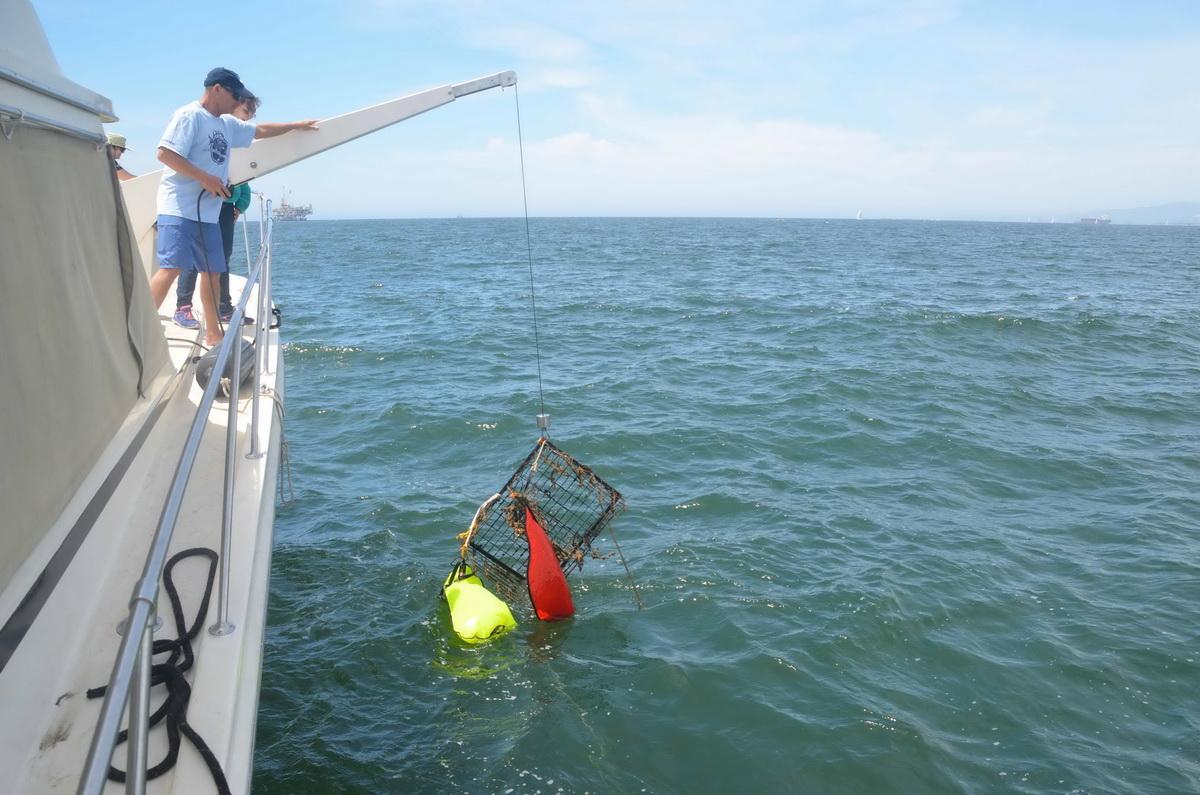 But we got all the stuff on the front deck and decided to head back to port as the dive conditions were becoming worse by the minute. 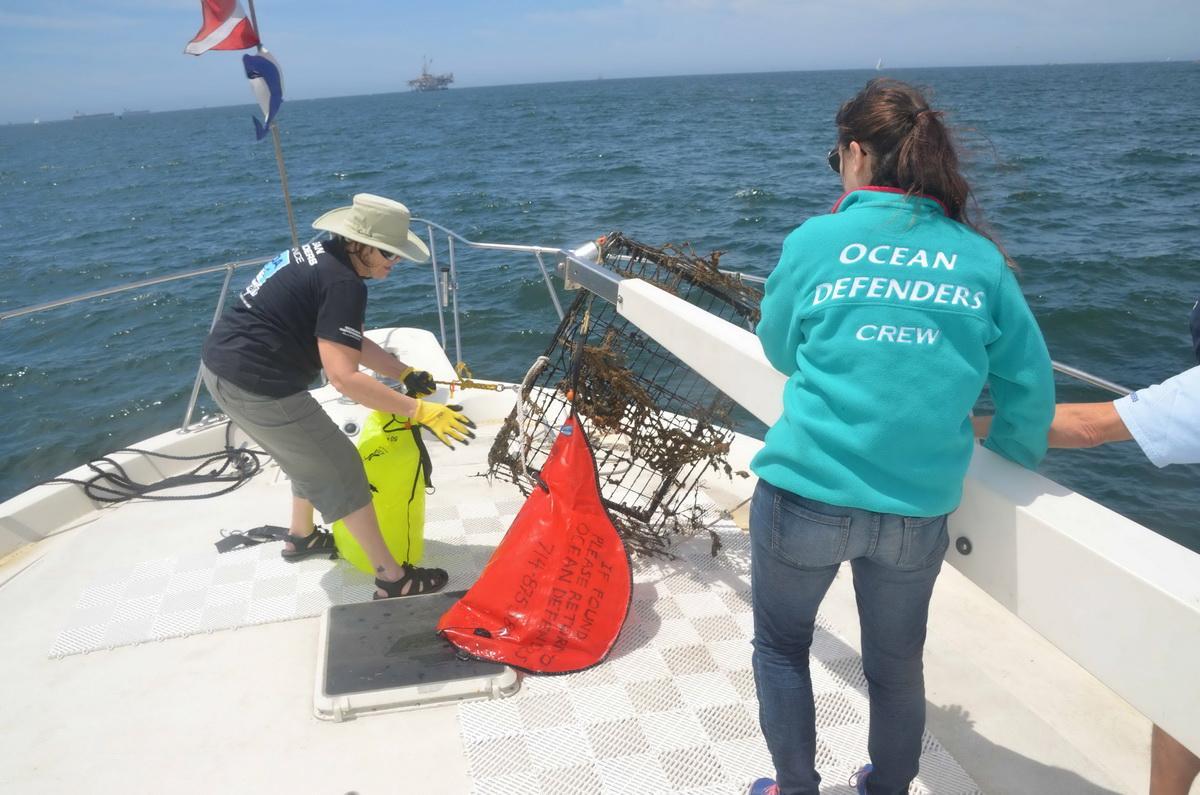 All in all it was good to be back in action. We removed one lobster trap, 100 feet of trap line, about 100 pounds of trap remnants, a fishing pole, and about 200 feet of fishing line. 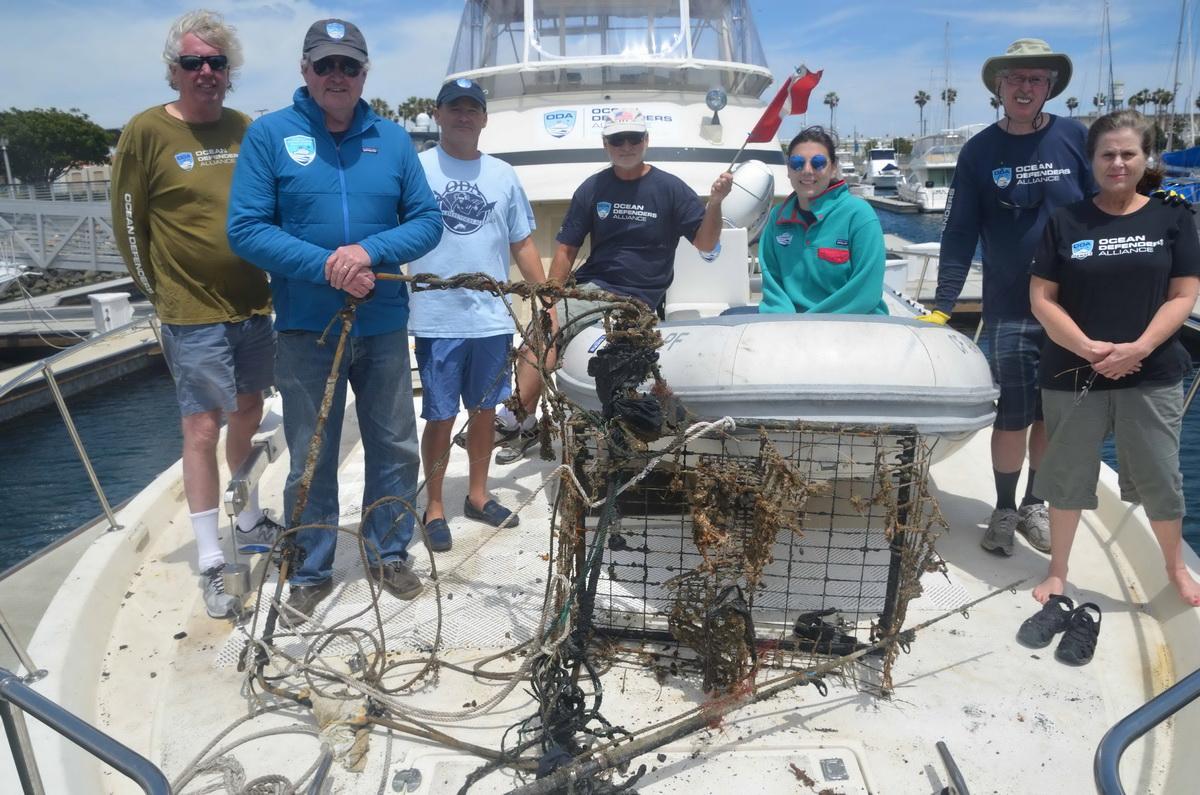 We couldn’t clean the seas without your help. We thank you for your support in helping ODA make our waters safer for our friends in the sea!